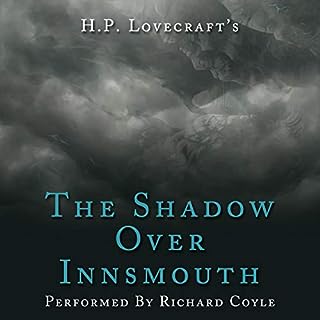 The Shadow Over Innsmouth tells the first-person story of a young historian, Robert Olmstead, who, while investigating his family genealogy in New England, is intrigued to learn about a hated and mysterious fishing town called Innsmouth. When he visits he finds the place to be run-down and near-deserted, with a cult-like religion and a strange, degenerate population. His investigation soon turns into a race to escape the town and the the evil creatures he sees emerging from the sea.

Narration was perfect, the score in the background was simply amazing. One of the best works by HPL.