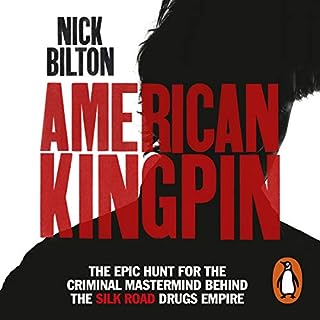 From New York Times best-selling author Nick Bilton comes a true-life thriller about the rise and fall of Ross Ulbricht, aka the Dread Pirate Roberts, the founder of the online black market Silk Road. In 2011, Ulbricht, a 26-year-old libertarian idealist and former Boy Scout, launched 'a website where people could buy anything anonymously, with no trail whatsoever that could lead back to them'. He called it Silk Road, opened for business on the Dark Web, and christened himself the Dread Pirate Roberts.

Best narration I have ever heard!

The author has done a great job in research and has presented it as an amazing narrative. The narration is so good that it felt like watching all the events live!

South African-born Elon Musk is the renowned entrepreneur and innovator behind PayPal, SpaceX, Tesla, and SolarCity. Musk wants to save our planet; he wants to send citizens into space, to form a colony on Mars; he wants to make money while doing these things; and he wants us all to know about it. He is the real-life inspiration for the Iron Man series of films starring Robert Downey, Jr. The personal tale of Musk's life comes with all the trappings one associates with a great, drama-filled story.

The book had an amazing flow describing everything in perfect detail, right from Elon's beginning to what he is now. Amazing listen!