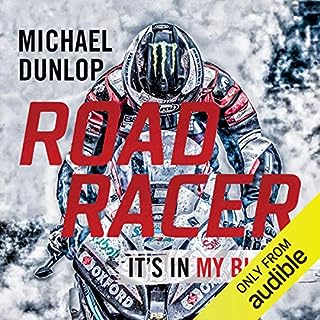 Michael Dunlop is quite simply the greatest road racer on the planet. Brother of William, also an accomplished rider, son of the late Robert and nephew of the late great Joey Dunlop, Michael can fairly claim that racing is in his blood. Now for the first time he talks in depth about his family story, how he got involved in the family business and how he manages to keep getting back on his bike despite all he knows of the deadly risks he encounters every time he crosses the start line.

Bare knuckle fight of a book.

You don't have to love motorcycles to enjoy this book. Unputdownable, I read it with breakneck speed, just like Michael's laps, a blistering read. I haven't come across a better real life account of men dealing with death, legacy and greatness.

I am so rooting for Michael this TT 2019. There's got to be two Dunlops at the top 2 TT wins leader board. I am hoping it's Michael taking the lead by 2021.

Highly recommended from a motorcyclist and book lover.