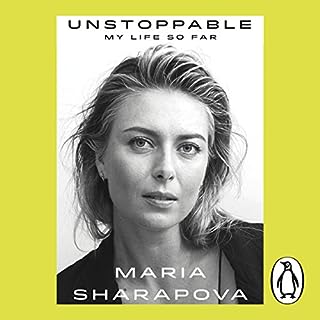 Unstoppable is the fiercely honest, fearless, darkly funny autobiography of global tennis star Maria Sharapova. In the middle of the night, a father and his daughter step off a Greyhound bus in Florida and head straight to the Nick Bollettieri Tennis Academy. They ring the bell, though no-one is expecting them and they don't speak English. They have arrived from Russia with just 700 dollars and the conviction that this six-year-old girl will be the world's next great tennis star. They are right.

Fabulous, a must read / listen.. What a story..

HIGHLY RECOMMENDED.. capslock says it all.. I rarely ever write reviews. But it would be unfair if I move on without writing for this one.

What a story!! And what a terrific Story telling. And if that was n't enough for a greedy me - Sharapova's narration of the story in her extremely pleasant voice did the magic!!

Now my expectations are rocket high - Wondering which next audiobook will fit the bill!!