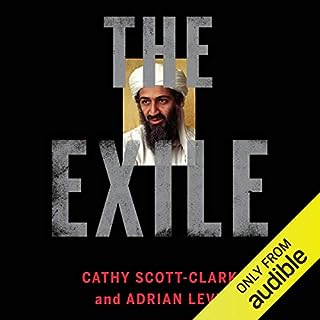 The Exile joins Osama bin Laden as he escapes into Pakistan in the immediate aftermath of 9/11, bringing to vivid life the years leading up to his death spent on the run and in exile. It tells the human story, and illuminates the global political workings. It is a tale of evasion, collusion, betrayal and the deep pain of isolation.

Excellent read & Excellent narration.
The book gives the complete info about the run of Osama from the days​ of Tora Bora strike to the Abbottabad raid to the creation of the Islamic State. It gives the info about how the Al Qaeda chief maintained contact with the outside world with the age old method of human couriers. Sure the Extreme Interrogation Techniques by the CIA brings out the working of the courier network.
Harbouring of the terrorists is major issue to Iran and Pakistan with the outside world. But the later is still struggling with it's internal terror acts and needs to take hard hand against it.

The fate of Al Qaeda was predicted by Osama on the D-Day of the Planes Operation. But what he missed was that of Global Jihad. It's not the elimination of the person​ of the organization or it's network, but the ideology of it's working will bring the end. Terrorism ideology can't be kept at large.