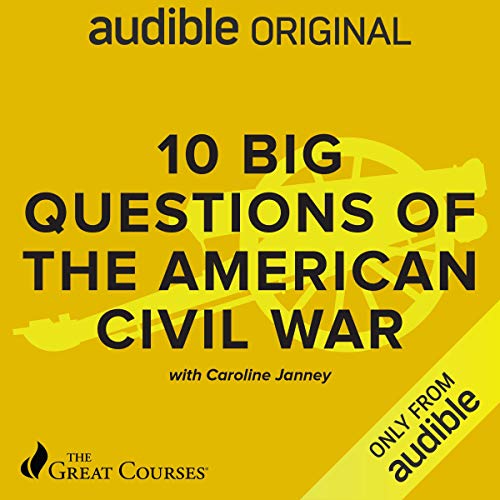 In 10 Big Questions of the American Civil War, join noted author and Civil War historian Professor Caroline E. Janney of the University of Virginia for a pointed examination of some of the most intriguing, provocative, and enduring questions about the Civil War era. The aim of these 10 eye-opening lectures is to separate myth from memory.

In 10 Big Questions of the American Civil War, join noted author and Civil War historian Dr. Caroline E. Janney, a professor at the University of Virginia, for a pointed examination of some of the most intriguing, provocative, and enduring questions about the Civil War era. The aim of these 10 eye-opening lectures is to separate myth from memory. Students will learn...

Dr. Janney will help you to sort through topics that still confound both scholars and students of the Civil War. What’s more, the author reveals the deep, intense, and sometimes violent nature of Civil War memory that still permeates throughout the United States of America.

I couldn’t get through this book. The author is viewing the civil war through the lens of 2019. And it does not take into account everything that was going on at that time. She needs a wider lens on her research.

There were some excellent lectures in this book. There was a thorough and unbiased approach and I felt that the level of detail was just right. My only issue was that many of the lectures concerned topics that I just wasn’t that interested in. I would’ve preferred to hear about the strategies employed by the two sides and answered questions like “could the union have shortened the war by employing a different strategy?”, “is there a scenario out def which the south could have won?”, or “what if the south had taken a defensive posture in the war?”. Instead there was a lot of discussion of things that I felt was less important.

Questions about the civil war answered.

I am 64, an educated person who has tried to learn about the civil war and has been unsuccessful. In 10 lectures, Dr Caroline Janney, Ph.D has made this history very accessible and I feel like I can successfully learn more. Highly recommend this as a wY to understand both the past and future.

A curious mix of historical perspectives mixing past and more contemporary periods and events. Lots of judgement and opinion. Disliked the kitchy country “fiddle” music separating the chapters.

Nothing you haven't heard before. Big government is good, the Yankees fought to free the slaves, and the South is bad.

extremely biased and obviously written be a left liberal wacko!! Sadly, this is exactly why UVA sucks as much as it does!!

Half-hearted attempts at revisionism ("Gettysburg was not a crucial turning point in the war, because Lee was not fired." That's an actual argument.)

This is what has become of the humanities in academia.

A Great Approach to the Issues of the Civil War

I have read a lot of books on the American Civil War that trace the development of the war, often in excruciating detail, from beginning to end. Caroline Janney brought a refreshingly new perspective to discussing the war and in doing so made the subject matter extremely relevant to modern times. She does this by asking pressing questions that modern audiences raise about the war and then tracing their answers in enough detail to show their complexity while also being convincing. For example, Did Lincoln Free the Slaves? The answer, of course, is yes he did, but he didn’t do it in a vacuum totally by himself and Janney shows how he came to do so. The parts I found most interesting were those that involved why the war was fought and how we remember it. Humans being human, we have changed our thinking about these things as time went on. When the Civil War began, the South very much thought that it was about slavery, but after losing the war they edited their story in an attempt to make their cause seem more high minded and just. Similarly, at the start of the war Northerners did not the war to be about slavery and insisted it was about preserving the union, but after the war it was the emancipation of the slaves that they most focused upon, recognizing it to have been a noble outcome of the struggle. Overall, this is one of the best books I’ve read on the Civil War because of its focus on issues and Janney’s willingness to tie those issues to modern debates in our society.

Did slavery play a role in secessionist cause? Yes. Is secession war? No. Therefore, northerners fought (as they repeatedly said) to preserve union and southerners fought a defensive war to repel invasion.
Slavery was only the most visible and contentious issue between two incompatible cultures torn apart when the northern interests elected a President with zero southern support. The election of 1860 reveals two separate and incompatible regions. Secession tried to formalize the obvious

Although short for an entry in The Great Courses, this is valuable. It digs into some common misconceptions:
- The South was fighting to defend slavery, pure and simple. They were concerned that the rest of the country would outlaw slavery, or at least make it more difficult (for example, by not returning those who had escaped)
- The North was fighting to keep their young country from disintegrating. Ending slavery was not the foremost motivation. Even when they did take steps against slavery, it was largely to weaken the South
- Women did a great deal to help during the Civil War, on both sides. Up to this point, it was thought women should not see or touch the body of men they didn't know. The Civil War changed that and let to the idea that most nurses are women.
- It's because of the Civil War that we had the draft, military cemeteries, income tax and more. Or at least, those wouldn't have been developed until much later.
- Gettysburg was not the key turning point of the war. It wasn't even a major turning point of the Civil War.
- Shortly after the Civil War ended, people in the North were saying they had gallantly fought for the freedom of enslaved people, while people in the South talked about state's rights and a noble cause - surely it had nothing to do with slavery.
- Pretty much right from the first generation after the Civil War, people in the South were erecting monuments, literally rewriting textbooks (to say, for example, that enslaved Africans were very happy and loyal) and defending the memory of the Confederacy. (And to think we're still seeing all of that today!)

Definitely good history for us all to learn.

An excellent and balanced explanation and treatment of the big questions of the American civil war, cutting through modern misconceptions.

Was genuinely very glad to have listened to this. It’s quite refreshing to have a lot of Civil War history packed into easily digestible chunks, as opposed to being bombarded with names, places and stats that Civil War books/audiobooks are quite notorious for.

Narrator was clear, easily understood and not boring (pretty key). She’s clearly very passionate about the subject which helps a lot as well!

Very much liked how the chapters went from the hard history all the way up to how the aftermath is still relevant to our lives today in ways we may not see at first glance.

As a Brit I knew very little about the American Civil War. This series of lectures (performed beautifully) tied the past to the present illustrating how the war is still impacting America today.
It made me determined to listen to a full history of the Civil War - if only Caroline Janney had released such a book on Audible (hint).
Many thanks Caroline for the contents and delivery of your lectures - much appreciated