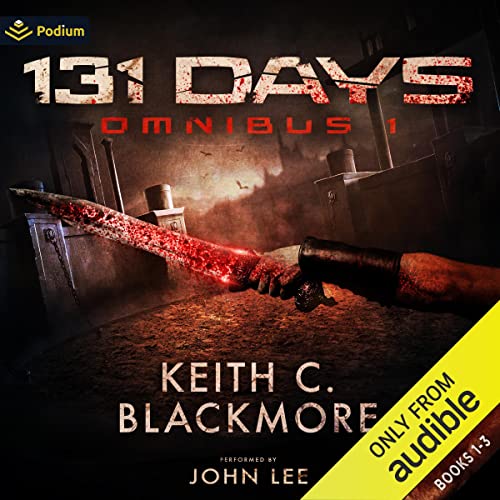 Contains books one, two, and three of the 131 Days series.

Once every year, in the city of Sunja, gladiators meet within the arena known as Sunja's Pit. Some men enter for the lure of fortune, some for the fame, and some simply for the fight. The games continue for days until a champion is finally crowned. Or until all involved perish.

Four companions struggle to change their lives in and out of the arena as it becomes clear that to be a Free Trained pit fighter is to live with a mark on one's head. And not everyone is pleased to learn of their plans, as the four warriors soon discover that the path to establishing a formal presence in the games, after the season has started, is infinitely more difficult than expected. All the while, unseen forces watch, waiting for the best time to strike at the companions and take everything that they have.

The warriors comprising the House of Ten begin training under punishing mentors and a drink-loving taskmaster. Within the city of Sunja itself, Borchus works to establish a network of spies to aid the newly formed house’s cause. A vengeful Halm hunts down Skulljigger for bloody retribution. And house master Goll realizes one of his pit fighters possesses potential beyond everyone’s expectations. All the while, shadowy elements conspire to make the Ten’s opening matches upon the sands also their last.

Feeling the weight of sustained injuries, Halm decides upon his future with the Ten, which prompts a crippled Pig Knot to contemplate his own remaining days. An act of vengeance drives Borchus into hiding. Within the underbelly of the Pit, arrangements are made to introduce Sunja’s most despised and dangerous criminals into the games, including a captured group of Nordish Jackals. All the while, the House of Ten prepares for its day of vengeful blood matches, where the gladiator known only as Junger will shine as a legend.

What listeners say about 131 Days: Omnibus 1

Good but has lots of character paths

Look forward to the series. It took a little bit to get going but once I started I didn't want to stop. Sometimes it was a bit confusing with all the characters with similar names.

Something about this book just made it really confusing. it might be how there is way too many characters in the story, especially in the first hour If you stop and try to come back a day or two later it's going to take you 15 to 20 minutes just to figure out where you're at. The gladiator fight is good but it just lost me...

I don't see a lot of stories that focus just on gladiatorial combat. But this one does and makes it work. Lots of saucy language; though it's swearing from their fantasy world. And I'm not sure what their fixation is on constantly swearing using as many variations of excrement phrases (pronounced shite in their world) as possible. As long as you don't mind that, or descriptions of men being butchered in the arena, then you'll probably enjoy it.

This is a fantastic series. Equal to Mountain Man.

Tired from writing reviews. Great series with tremendous depth and scale. Almost too many story lines but almost all with well thought out and real people for characters. Blackmore is a true talent and world builder.

what we have here is a writer who has found a very unique
niche of fiction which gripped from the first page. Usually, i have
three or four books going so I can jump to another when
i get bogged down in my current read. Not with this creation!
With John Lee's performance, I don't know how it could
get any better! I look forward to the next installment!

if you like gladiator fighting then get this. it's awesome, detailed, bloody and just plain great.

If you enjoyed the Spartacus blood and sand series this is for you. Blood, guts ,gore and glory Enjoy. Well done Mr.Blackmore