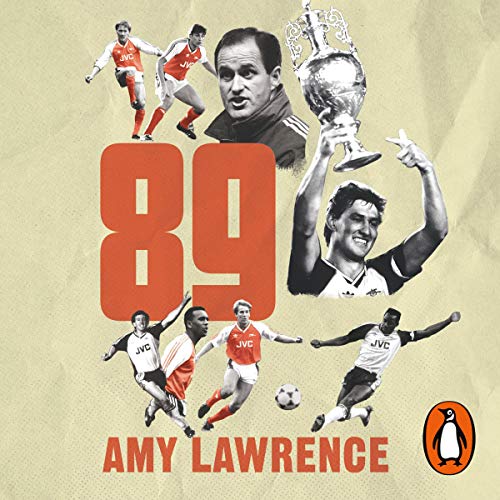 This audiobook edition is narrated by Alan Davies.

The final day of the Division One season. The rest of football stopped to watch as perennial champions Liverpool took on rank outsiders Arsenal in a head-to-head contest for the title. With the Gunners leading 1-0 but desperately needing another goal to take the title, it was, in the immortal words of commentator Brian Moore, ‘up for grabs now....’

Set against the backdrop of Hillsborough disaster, and during an emotional era in football long before the Premier League as we now know it, 89 is an oral history of a sporting moment so unusual it felt instantly historic.

89 creates a definitive and kaleidoscopic portrait of a match, and an iconic moment in English football that changed the sport forever.

Drawing on years of research and interviews, writer Amy Lawrence brings together fascinating and never-before heard testimonies from the voices who were there on the pitch, including captain Tony Adams, goalscorers Alan Smith and Mickey Thomas, manager George Graham and many more.

Also featured are accounts from those off the pitch, including Arsenal legend Ian Wright, super-fans Nick Hornby, Alan Davies and Dermot O’Leary, and Gunners from across the globe recounting where and how they watched, and the lasting effect this seminal games has had on their lives.

This audio edition includes an exclusive bonus chapter of a Q&A between Amy Lawrence and Alan Davies.

What listeners say about 89

I've had the DVD of this for a while, so I was intrigued to get the audiobook.
Even as a Liverpool fan, I have a soft spot for Arsenal, and I can't be angry at them winning that night. As had been said in the film and book, moments like this will never happen again.
A very well-written and passionate project all around. Thank you for doing this, Amy.

Yes, I'm a Gooner, but objectively this is a fantastic book. I will listen again and again. Amy Lawrence is so talented and I adore her writing. A must for any Arsenal fan!

I loved listening back. I'm a big Arsenal fan but I was only 8 when this happened so it was great to get some context around it all. The last bonus chapter was a nice touch.

An excellent read. You can get lost in the many characters but still an enthralling story based on fact.

Every new player should read this!

A brilliant book which not only brings 89 to life but which every new signing for The Arsenal should read or listen to before they pull on the shirt. They will soon know what it means to represent the badge and whether they are worthy.

Amazing stuff, so many emotions

Amazing stuff from Amy Lawrence & Alan Davies and an excellent companion to @89film mixed emotions covering undoubtedly the greatest end to a season ever and footballs greatest tragedy. A must listen x #jft96

wonderful book, wonderfully read & a wonderful glimpse into the Pinnacle of what true support of a sports team is all about. I think it's a shame that we've lost so many of the positive things connected with football since but this book does an amazing job of capturing the glory of that time - before money spoiled the sport

Gear for any footy fan. But great for us Gooners

Loved it. Great to hear about 89 as a fan since 1994! Didn't know great deal beforehand.

A wonderful trip down memory lane

A brilliantly written (and narrated) book about Arsenal's historic 88/89 season.
Comments and memories from players and fans giving a really nice perspective on that fateful night from multiple angles.
A feel good story that is hard to believe really happened 30 year on!