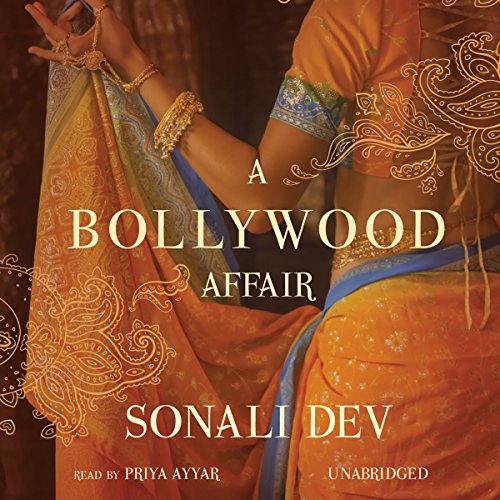 In the tradition of Shobhan Bantwal's successful Indian American novels, Sonali Dev's debut captures the colorful spirit and fascinating details of Indian and Bollywood culture - including a lavish wedding - while delivering an emotionally layered and accessible story.

Mili Rathod has been bound by marriage since she was four years old. But when her husband shows no sign of claiming her after 20 years of waiting, Mili grabs the chance to leave India and come to America on a scholarship.

Playboy filmmaker Samir "Sam" Rathod is Bollywood's favorite bad boy. He'll do anything for his big brother - even travel halfway across the globe to take care of the "wife" who just crawled out of his brother's past. Yet Mili isn't the simple village girl Sam expected. She's a whirlwind who sucks him into her roommate's elaborate elopement and soon has him drowning in her onyx eyes. And though Mili fancies herself in love with his big brother, the husband she has never met, Sam is hoping for a very different ending.

What listeners say about A Bollywood Affair

Something Predictable yet Engaging

It kept me interested and wanting to go back and Finish it.

Very well presented which helped in Visualisation as well, which is a must for any reader.

Audio could have been a little better but still a great outcome.

I've never been this disappointed in an audiobook. The narrator mispronounced 90% of the Hindi words to the point where it actually pulled me out of the story. If you speak Hindi or anything Hindi adjacent, be prepared to grit your teeth constantly.

I generally enjoy reading books by Indian authors. Best I can say about this one, though, is that it was an average read. With the exception of a few chapters, most move too slowly, with much repetition of old stereotypes. I would skip this one.

3 stars and I'm being generous

Coming from India, I've been Overdosed with Bombay Masala Film Industry and seen it all from classics to cheesy with boring, funny, hilarious and ridiculous in between, I can definitely say I'm a somewhat well versed reviewer of anything india related. The story, for any non-indian would be Oh-So-sweet serendipitous love. It somehow, fell way too short for me. It's sad that in India authors are getting smarter and mature, while authors of Indian descent, living abroad are rehashing old bollywood drama in the hopes that the non-expatriates won't notice or make the connection Of the characters, they had no chemistry and/or vitality. The cardboard cutouts of 2 dimensional caricatures. The old adages have been dragged through mud, clichéd lines and ideologies which are in process of refreshing metamorphosis in good ol' India are somehow hung up to dry in the book. The best comparison would be a dish frozen in 1990s bollywood, is microwaved and dished now. 3 stars and that's too generous

I Tried& Tried But Just Could Not Follow This Book

I think that it may have been too complicated/complex for me to follow. So strip down and streamline the plot. That would be my recommendation.

Could you see A Bollywood Affair being made into a movie or a TV series? Who should the stars be?

Perhaps I could see a Bollywood affair being made into a movie or a mini TV series. I have no idea who I would suggest for acting in it.

I really wanted to like this book and to follow the journey of all of the characters. However, after many tries to start at the beginning and follow along, I just wasn't successful.

Thanks for taking the time to read my review. If you found it helpful, would you take a moment and select the helpful' button below? I also invite you to follow me on Audible to read, vote on and share my reviews.

I enjoyed the narrator, and that is about it. I have to write six more words. There, that should do it.

It was hard getting through this one, but I wanted to keep going just in case it got better.

It didn't. The story was stale, predictable, and unrealistic. The luscious amount of detail and the reader's great voicing of it saved it a bit, but the story itself was a chore to get to the end.

The narrator was pretty dull and mostly monotone. There were a few mispronounced words as well. The story was predictable, but is good for an easy beach listen.

Yes, once I got through the beginning, I really liked the book.

What other book might you compare A Bollywood Affair to and why?

Nothing comes to mind. Original in my library.

Have you listened to any of Priya Ayyar’s other performances before? How does this one compare?

Though I got angry at both Mili and Samir at times for not telling each other who they were,I was rooting for the two of them all along.

It started out slow for me. I loved the Hindi narrator, but there were so many names (unusual to my ears) that it was hard to keep track of them all. Overall I enjoyed the story.

Would you listen to A Bollywood Affair again? Why?

One of the best books I've read in 2014! A Bollywood Affair is like a chocolate truffle, meant to be devoured slowly, purposefully, each word, each phrase, melting into you and becoming one with your soul, leaving you feeling warm and satisfied.

What was one of the most memorable moments of A Bollywood Affair?

"You stole the words from my heart."

What does Priya Ayyar bring to the story that you wouldn’t experience if you just read the book?

For me this is the perfect type of romance novel. I loved it. I took all sorts of sneaky opportunities to listen to it. It was beautiful, funny, sad and heartwarming. If I wrote romances, I would have wanted to have written this one.

I loved every romantic minute of it. Great characters. I felt I was in the story with them.

Excessive use of curse words. Colourist

was supposed to be a light read to lull me to sleep most nights. predictable story line but was shocked by the excessive cursing.
The writer must have tried real hard to insert one in every line. So childish.

And the emphasis on light skin was disturbing.

I'm just glad this was in the plus catalogue so free.

I just loved this. The narrator was absolutely brilliant. Didn’t want it to end. Lovely.

The performer was brilliant! The story was good too, but I kept listening because of her. Doing all the voices and accents brought life to the story and was very engaging.

Loved the story and the characters. The narrator brought them alive and I was sucked in

Well narrated, good characterisation, I stuck with it to the end, although the ending was very predictable. Would benefit from being abridged.

A bit too predictable

Picked it and then discovered that it was full on romance, not my thing, but have to say it was entertaining and sweet.
Very well narrated though.
Need to remove some of the hundreds of "what is wrong with you?" statements that got a bit painful.

Far too much unnecessary, inappropriate language. A disappointing book altogether, a missed opportunity, had the potential for so much more.

The story was clever, complex and very engaging. Much better than standard chick lit