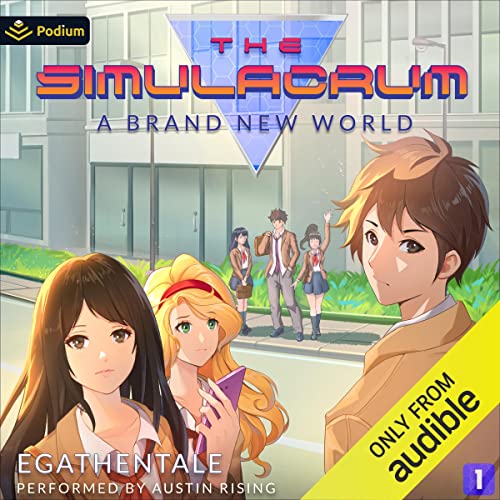 Written by: Egathentale
Narrated by: Austin Rising
Free with trial

A teenager becomes a romantic hero in an artificial-reality school full of supernatural secrets in the first book of a slice-of-life, urban-fantasy series.

Leonard Dunning wakes up in a home he doesn’t remember—and to a face in the mirror he doesn’t recognize. He soon discovers he attends Blue Cherry High with his best friend, Josh Bernstein, who seems to be the most popular boy in school, with several girls competing for his attention. As the girls collide and clash over the oblivious Josh, Leo realizes each of them displays quirks of characters found in an anime harem comedy. So if Josh is the story’s protagonist, what does that make Leo?

To learn more about the simulation in which he’s been cast, Leo enlists the help of background extra Judy Sennoma. Together, they observe and catalog what’s going on around them to try to figure out how the story will unfold. But as Leo interacts with Josh’s love interests and inadvertently confronts stereotypical villains, he disrupts the flow of the narrative. Now, two girls have set their romantic sights on him, and he’s made some very powerful enemies. As the designated secondary protagonist, Leo has become a hero in an adventure that’s no longer following the tropes of the genre—and placed himself and his friends in grave danger.

Caught in the crosshairs, Leo must develop his newfound superhuman abilities before he gets dragged into the hidden conflicts between otherworldly factions. But he’s not afraid to push back against the plot, and the narrative’s shadowy controllers are in for a rude awakening.

What listeners say about A Brand New World: A Slice-of-Life Urban Fantasy

You can't expose the tropes by following them.

After a brief teaser at the start that hints something unexpected may be going on, the book just settles into an unbearably long chain of high-school anime tropes where literally nothing interesting happens. The MC is self-aware enough to realize this, but not enough to recognize his place in the story. He also practices extreme self-deception, while enforcing strict truthfulness on those around him.

I listen to this book for untold hours upon hours and nothing actually interesting happens It's an untold plot review that reveals itself over way too long of a f****** distance that it just becomes annoying.

Story is great, though the intro is long.

Story is great, but the first act where basically nothing happens except the introduction of all the characters takes up a major part of the book. After that you get one instance of action which unveils the masquerade, and it goes back to status quo, though the MC starts to be a little more interesting.

However, there were numerous times when the narrator mispronounced foreign words that broke immersion, such as pronouncing the Japanese word Moe as the English Name.

Overall, I would recommend this book with a credit if you need something to listen to while at work or what not.

not bad, just a bit wordy and still follows the trope of avoiding making choices.

took to long to get to the main story

The title sums up the MC which makes the whole plot line hard to follow. Overall it was pretty decent. The excellent world building and a decent plot line was what kept me listening but the tangents the MCs thoughts kept rabbit holing down would just make most of the fights and romantic shenanigans too cumbersome at times, and usually at the worst times. The final battle wasn’t too bad but it took a lot to get to that point.

The male narrator was kind of monotone though he did a great job with the female characters and even had the cast of characters differentiated enough to tell them apart.

Overall decent but I don’t think I’m the intended audience. I might get the second book once I start looking for a time filler between my other series.

long but so worth it

I got this on a whim unsure if I'd like it and boy do I love it!!
If you like rom-com, action and fun characters you will love this.
it isn't flawless a few times the main character thinking in an almost 4th wall breaking way was mah but!!
if you like anime and want to read/listen to a fun and comedic story look no further. I am also big fan of the mc powers, as well as his two romances....which I hope work out.

Story - Great story. I love a smart hero. Planners are the best when they are slightly over matched. The MC is quick to grow into his powers near the end which is fine as it isn't over shadowing everything else. The MC's humor is amazing as well. He and a couple of his friends make some great quips back and forth. He has a bit of the Oblivious Harem Protagonist to him but it mostly done in such away that it believable without just making him seem an idiot. Anyway Egathentale does a great job of both making good fun of the Harem tropes and leaning into it. 100% would recommend.

Magic - It is slowly introduced as an underlining building block for the world. The MC's abilities seem to be unique but in no way over powered. He clearly less power full then the others so there isn't a worry of the OP MC that flexes his random power to overcome everything.

Narration - Narrator did a great job for a single Narrator doing both male and female voices. The odd sound that the girls made were still pretty endearing which can be difficult in an audio book.

So Glad I Gave This Audiobook A Chance!

This audiobook took me by storm! I was splendidly impressed by the story and the plot progression! Thank you, Egathentale for writing this story. Thank you to Austin Rising for brilliantly preforming it for Audible! I cannot wait for the sequel to come out in late September! I look forward to what happens next to Leo and the gang! I recommend this audiobook to anyone that loves mysteries, romance, supernatural elements, dragons, and anime tropes!

sorry tried hard to like this but so slow

Honestly surprised by how much I enjoyed this!

I was expecting this series to be more or the same honestly but I genuinely enjoyed it, the protagonist/not protagonist is well written, paranormal not so much honestly but slice of life fits.

It’s a bloody good book, but you’re gonna need to speed it up. I listened to it at 1.2x speed.
The first person perspective gets a bit frustrating meandering through the mc’s thoughts mid dialogue
But it’s a good slice of life picking at the tropes and clichés in the genre