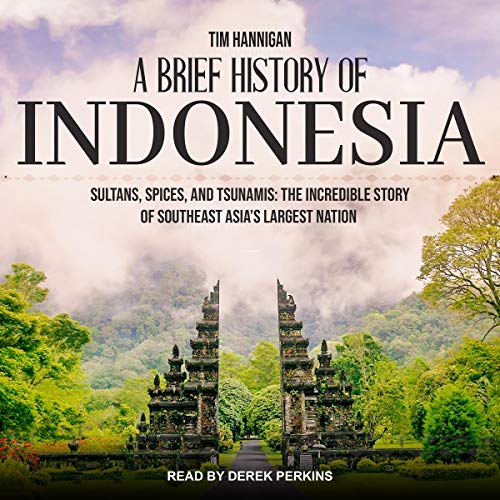 A Brief History of Indonesia

Indonesia is by far the largest nation in Southeast Asia and has the fourth-largest population in the world after the United States. Indonesian history and culture are especially relevant today as the island nation is an emerging power in the region with a dynamic new leader. It is a land of incredible diversity and unending paradoxes that has a long and rich history stretching back a thousand years and more.

Indonesia is the fabled "Spice Islands" of every school child's dreams - one of the most colorful and fascinating countries in history. These are the islands that Europeans set out on countless voyages of discovery to find and later fought bitterly over in the 15th, 16th, and 17th centuries. This was the land that Christopher Columbus sought, and Magellan actually reached and explored. One tiny Indonesian island was even exchanged for the island of Manhattan in 1667!

This fascinating history book tells the story of Indonesia as a narrative of kings, traders, missionaries, soldiers, and revolutionaries, featuring stormy sea crossings, fiery volcanoes, and the occasional tiger.

History books on Indonesian history are pretty much non-existant on Audible so I was pleasantly surprised to see this title become available. It's not a bad general overview and works well as a introduction to Indonesian history for non-scholars. The narration is fine as well. Hopefully we'll be seeing more Indonesian (and south-east Asian) history on Audible in the future.

I highly recommend this book to anyone interested to know enough background information about Indonesia.

Good narration of a wide introduction to Indonesian history. One criticism it seemed to gloss over Japanese occupation and the millions of Indonesians who lost their lives during it. Other than that a good listen.

detailed but I'm trying to stay awake listening to it. It's a history book so... somewhat expected.

My favourite history book ever

I have always been fascinated by Indonesia and its rich history. seeing a book on the history of such a diverse
and wonderful country is perfect for me. The narrator was very easy to listen to, made the book all the better. 100% read this if your interested in Indonesia at all.