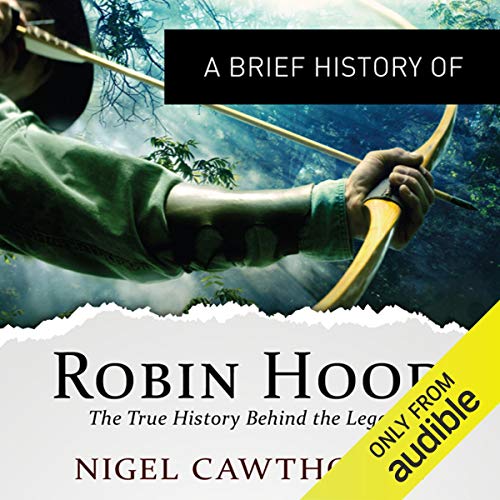 A Brief History of Robin Hood: The True History Behind the Legend

Who was Robin Hood? Throughout history the figures of the hooded man of Sherwood Forest and his band of outlaws have transfixed readers, listeners, and viewers; but where does the myth come from?

The story appeared out of the legend of the Green man, but found its location during the reign of Richard I, the Lionheart, who was away from England fighting in the crusades. In his absence, his brother John laid waste to the country.

But does this tell the full story? Was Robin a bandit prince ahead of a troop of brigands? Who was the Sherriff and was he in fact the legitimate law in the land fighting vigilantes?

For the love of Robin

This is a good book, and it was well read. It does lean more to the scholarly side that the action, adventure so be warned. Nigel Cawthowne does a great job exploring both the origins of the legend of Robin Hood and looking at how the legend has changed over time. While he doesn't pin down the “real” Robin Hood, I did find it interesting to find out how many parts of the legend can be tied to historical events and people.

I was promised the true history behind the legend, and that's exactly what I got. Insights into Robin Hood as a possible/probable real person, exploration of the character over hundreds of years of pop-culture, and examination of Robin Hood's supporting cast (both real and fiction.)
This audiobook offered the exact level of depth that I needed, as a casual fan of the character. Very accessible but also very matter-of-fact with an authoritative tone. More in-depth than an online article or encyclopedia entry, but not so in-the-weeds that it becomes dull or alienating.
While I have no real complaints with the presentation, it's not elevating the art, either. Nothing about this audiobook is going to nail your hair to the wall. It's simply a very easy and digestible audiobook, for history fans and people who have an interest in the character.
Hollywood fans beware: while the many film adaptations of the character are mentioned, don't expect a ton of discussion about them. Fairbanks and Costner get only passing mentions, at the end of the book.

If you could sum up A Brief History of Robin Hood: The True History Behind the Legend in three words, what would they be?

What other book might you compare A Brief History of Robin Hood: The True History Behind the Legend to and why?

The Legend of King Arthur

What does Eleanor David bring to the story that you wouldn’t experience if you just read the book?

The real story of Robin Hood

This was a very interesting summary of the various strands to the Robin Hood legend.

Some random woman goes "Oh, I am not an actress, but I can read out your audio book " and this is the end result.
Awful.
I am sure the book has excellent content, but the audio performance is woeful and deeply irritating. She gabbles away. Can't act. Doesn't try. Its a complete farce.