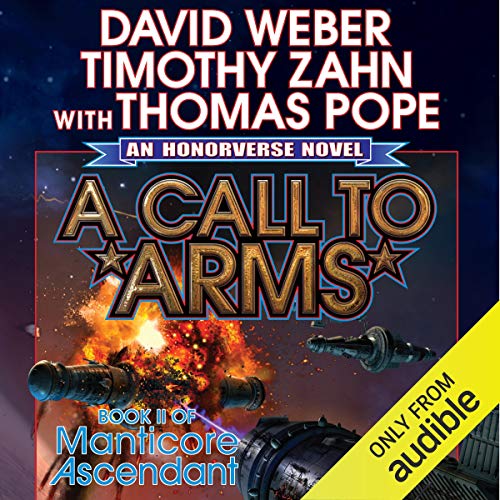 A Call to Arms

Lieutenant Travis Long of the Royal Manticoran Navy is the sort of person who likes an orderly universe. One where people follow the rules. Unfortunately he lives in the real universe. The good news is that Travis is one of those rare people who may like rules but has a talent for thinking outside them when everything starts coming apart. That talent has stood him - and the Star Kingdom - in good stead in the past, and it's one reason he's now a "mustang" - an ex-enlisted man who's been given a commission as a king's officer. The bad news is that two of the best ways of making enemies ever invented are insisting on enforcing the rules...and thinking outside them when other people don't. Travis learned that lesson the hard way as a young volunteer in basic training, and he knows that if he could just keep his head down, turn a blind eye to violations of the rules, and avoid stepping on senior officers' toes, he'd do just fine.

But the one rule Travis Long absolutely can't break is the one that says an officer in the Royal Navy does his duty, whatever the consequences. At the moment,there are powerful forces in the young Star Kingdom of Manticore's Parliament that don't think they need him. For that matter they're pretty sure they don't need the Royal Manticoran Navy, either. After all, what does a sleepy little single-system star nation on the outer edge of the explored galaxy need with a navy? Unhappily for them, the edge of the explored galaxy can be a far more dangerous place than they think it is. They're about to find out why they need the navy...and how very, very fortunate they are that Travis Long is in it.

I am a big Honor Harrington fan and can hardly wait for more stories about Manticore and Honor. This is book two in the Manticore Ascendant series. Lieutenant Travis Long of the Royal Manticorean Navy is a mustang. Long is an enlisted man who has been given a commission as an officer. Manticore is going through a stage where it is trying to decide if it even needs a navy. Suddenly they find out how dangerous the universe is.

The book is well written, the pace is fast, and as with any Weber book there are technical details about space flight and fighting. I think the co-authors kept Weber from his usual long winded political rants. Weber is great at writing space battles and this story has some good space battle scenes. The book will keep your attention all the way to the end. The book provides information about the early history of Manticore. Eric Michael Summerer does a good job narrating the book.

A good story, although not new.

A good story with fascinating characters. It was a rehash of an earlier story and probably it will be long time before we see the next in this series. David Weber is a great writer. Unfortunately he never finishes a series. It must be some kind of mental block. He just starts a new one so that even more are unfinished.

Even so this one is a part of the history of one of his best stories, the Honerverse of The greatest of all Manticorans, Honor Harrington. One day, if David lives as long as we would all wish, we will see the next in this series.

The Second volume in David Webers new series about the early days of the star kingdom is a big improvement over volume one. There are the same body of throw away characters who are hard to warm up to, but the action heats up in the last three hours and holds the listener's attention. I am looking forward to the the next chapter in the series.

More of the same but now he's an officer with a love interest. Still a stickler for the rules but still thinking outside the box.

I love Weber books and I have to say this is the first time I ever said this about any of his books. Very interesting ending that makes me look forward to the next installment.

The Honorverse need not worry.

It's trying to watch as personality bullshit is rationalized to the detriment of other people's well being, but, it's very entertaining when comeuppance is delivered. Weber created the template for political villainy and it's nice to see Zahn and Post jumping on that bandwagon.

Have no fear, a good edition to the Honorverse.

The Hall of Hero's

This is an extremely well written take, however, it is focused on so many different heroic characters that one must keep track of. The result is a story that lacks focus until the final battle. Not perfect, but a good read.

fun and action for the Harrington fan that wants to learn about the beginning of the RMN.

A Call to Arms

The entire series is great! I love it when women demonstrate they have strength honor, integrity, and a sense of duty serving their country. I feel as though the characters are old friends. You laugh, cry, & celebrate them.

What made the experience of listening to A Call to Arms the most enjoyable?

It is the start of Manticore the star nation/empire

What was one of the most memorable moments of A Call to Arms?

it is a good read with expected details

I am not slamming the book but for new readers you have to expect the same political storyline, which if it was actually true the politicians would be made accountable, instead we get the weber bias for politicians who are blind to the reality the book is trying to portray.the technology available would soon sort out the bad from good (spying which it seems does not happen), but it would then shorten the book a little, I don't know the political side is part of all weber books but the intrigue that this is supposed to create is a little lacking...overall it is a good read, but be aware of the political overtones to these books