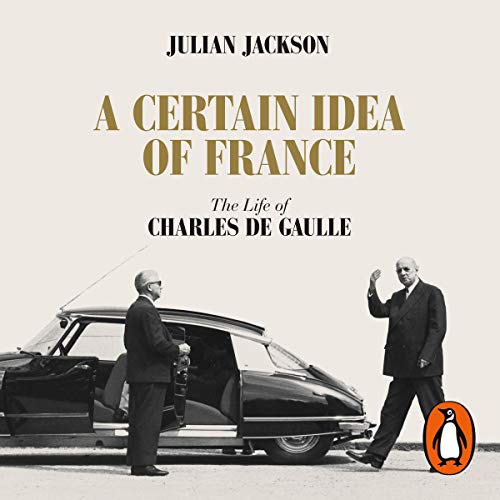 Penguin presents the audiobook edition of A Certain Idea of France by Julian Jackson, read by John Banks.

In six weeks in 1940, France was overrun by German troops and surrendered. One junior French general, refusing to accept defeat, made his way to England. On 18 June he spoke to his compatriots over the BBC, urging them to rally to him in London. At that moment, Charles de Gaulle entered into history.

For the rest of the war, de Gaulle frequently bit the hand that fed him. He insisted on being treated as the true embodiment of France, and quarrelled violently with Churchill and Roosevelt. But through sheer force of personality and bloody-mindedness he managed to have France recognised as one of the victorious Allies.

For 10 years after 1958 he was President of France's Fifth Republic, which he created and which endures to this day. His pursuit of 'a certain idea of France' challenged American hegemony, took France out of NATO and twice vetoed British entry into the European Community. His controversial decolonisation of Algeria brought France to the brink of civil war and provoked several assassination attempts.

Julian Jackson's magnificent biography reveals this the life of this titanic figure as never before. No previous biography has depicted his paradoxes so vividly. Much of French politics since his death has been about his legacy, and he remains by far the greatest French leader since Napoleon.

What listeners say about A Certain Idea of France

Thrilling account of the life and time of De Gaulle. Brilliantly written and read and difficult to put down.

Couldn't get into it

The subject matter should be compelling and riveting, but I just couldn't get into it. The narration was great. But there are just some audiobooks you lose concentration on and this was one of them. I suspect it was because most of the story (I got about halfway) was about back-room politics and shenanigans, and not the real center of power during WWII and the inter-war years.

I'm sure people will love this, I just couldn't stick with it.

A true hero of France , idiosyncratic yet resolute in his convictions to the end .
Excellent narration

This is a genuinely monumental book and the definitive biography of de Gaulle in any language, including French. It has indeed been recognised as such even in France, usually scathing of foreigners interpreting their national symbol. But a narrator should have been chosen who spoke French or checked pronunciation: half the proper nouns are terribly mangled. E.g it is Edgard Faure, no accent on the last e (not like the composer), the Duc d’Enghein, hard g not like engine, and so on for hundreds of characters and places. But do buy this great book.

An extraordinary work from Julian Jackson, so thoroughly researched and written. A delight to listen and read. As a Frenchman I sometimes cringed at the pronunciation of certain names and places but overall a great narration. Mr Jackson, this would have to be a reference in any biography of “Le General”. Well balanced (which is not an easy task) and full of insight and explanations.A great achievement. Loved it. Thank you