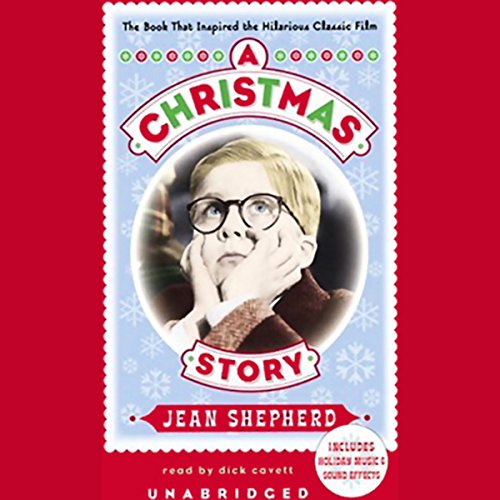 The holiday film A Christmas Story, first released in 1983, has become a bona fide Christmas perennial, gaining in stature and fame with each succeeding year. Its affectionate, wacky, and wryly realistic portrayal of an American family's typical Christmas joys and travails in small-town Depression-era Indiana has entered our imagination and our hearts with a force equal to It's a Wonderful Life and Miracle on 34th Street.

This audio production of A Christmas Story gathers together in one hilarious volume the gems of autobiographical humor that Jean Shepherd drew upon to create this enduring film. Here is young Ralphie Parker's shocking discovery that his decoder ring is really a device to promote Ovaltine; his mother and father's pitched battle over the fate of a lascivious leg lamp; the unleashed and unnerving savagery of Ralphie's duel in the snow with the odious bullies Scut Farkas and Grover Dill; and, most crucially, Ralphie's unstoppable campaign to get Santa, or anyone else, to give him a Red Ryder carbine action 200-shot range model air rifle. Who cares that the whole adult world is telling him, "You'll shoot your eye out, kid"?

The pieces that comprise A Christmas Story, previously published in the larger collections In God We Trust: All Others Pay Cash and Wanda Hickey's Night of Golden Memories, coalesce in a magical fashion to become an irresistible piece of Americana, quite the equal of the film in its ability to warm the heart and tickle the funny bone.

I guess Jean Shepherd and J.K. Rowling have something in common -- the movies are never quite like the book. I love the "Christmas Story" movie and watch it ritually every Christmas season. I have to admit, I like the movie better than the book -- but like with Harry Potter, that is probably not a fair comparison -- directors take too much license with these stories. This is a great story. Shepherd writes in such a descriptive manner -- I almost feel as if I lived in that house and fought the Bumpuses dogs. I probably listened to the audiobook six times last Christmas season, and will probably do so again next season. It is just that good!

This is a short book that can be gone through in an afternoon of housework. I think it rather a pleasant choice for listening.

A lot of reviewers have mentioned that Cavett is not a good fit. I agree because Cavett brings with him a personality that just doesn't fit with the background of the books narrator. Can you imagine Cavett as the child of a dead end family in the depression? I can't. It was painful at times to hear him trying to rise to the demands of the text - like imitating the baying of the Bumpess's hounddogs.

Well, we all know it was a product of a movie in that the short stories contained in this volume were taken from other texts that the movie was based on.

The producers of this audiobook thought it crafty to include sound effects alongside the narration. This was a big mistake. It doesn't work. It makes it difficult to listen to at times because it seems like there is a TV or a radio on somewhere in the room and it becomes distracting. The sounds are too literal and too cute at times. I think most readers would prefer to hear only the reader and nothing else. We are all smart enough to imagine the sounds we are meant to hear as the text is revealed to us.

Got this for a holiday car trip, and thoroughly enjoyed it. It took a while to get used to the narrator (whom I am not convinced was the best choice), but it was as charming as the movie, and maybe even more so.

Its not the movie but its still good

Don't expect this reading to be exactly like the well known movie of the same title. The characters are the same but its doesn't all happen at Christmas time. The episode with the famous leg-shaped lamp is recounted in hilarious detail. However, the boy's obsession with a Red Ryder frontier rifle is not resolved as it was in the movie. The hillybilly neighbors, the Bumbass family appear as well, although in a darker more threatening form. I liked Dick Cavett's reading and there was an appropriate use of music.

whoever wrote the screenplay for the movie should have gotten at least a nomination for adaptation, not to mention Darren McGavin should have for acting. that being said, this is a wonderful collection of related stories that were reworked into the film. each episode in this collection is a lengthier treatment of the major ideas in the film: the leg lamp, the BB gun, etc., and there are moments that had me laughing out loud although i knew what to expect, but my favorite at the moment is the Bumpus's hounds, a much longer and over the top exaggeration of a neighborly conflict, and i had to stop for a minute i was laughing so hard. & at times Cavett sounds a bit like McGavin when speaking. if you like the daydreamy shenanigans of Calvin & Hobbes then you'll enjoy these childhood reminiscences.

There were definately some liberties taken by Hollywood in the adaptation. Missing one of the best parts in the movie, the tongue on the flagpole. Dick Cavett is a little monotone. Sure wish Jean could have read this as he narrated the movie.

Totally wrong narrator for this book

I guess I am too used to the movie where the narrator is the author Jean Shepherd. The book needed someone with a warm deep voice and Cavett's is too light and almost 'girly'.I never got the impression he enjoyed what he was doing and there was never any change in his inflection no matter what was happening in the story. I had my doubts before I bought and I should have stayed with my instincts and not purchased this. If you are a real fan of the movie don't buy this. You will be disappointed. I gave up after the first chapter.

Many laughs for Christmas.

Would you listen to A Christmas Story again? Why?

Perhaps next Chritmas would be a good time to hear it again.

Ralphie is the central character, of course; but the "old man" steals a lot of scenes.

Have you listened to any of Dick Cavett’s other performances before? How does this one compare?

I had not heard Cavett before on Audible. He did a good job, but Jean Shepherd's narration in the movie is hard to beat.

Yes, but I like to spread Audible books out over a few days.

It's hard to stop smiling (or laughing out loud) from start to finish.

What did you love best about A Christmas Story?

I absolutely love this story. When I was a kid my older sister took me to see the movie in our down town single screen movie theater. Like most of what is in the book, that theater as well as the down town is gone and moved to the mall, but the memories remain. This will be my generations

Make it a Christmas Tradition

This is a great listen. It is not the movie, but the performance by Dick Cavett is destined to be a legend in "kiddom." The subtle sound effects add a dimension to this that will delight both young and old. The book is a group of short stories that cover several types of special occasions; the "dogs stealing the holiday meal" incident is much funny in the book. Jean Shepherd is a superb writer. At 3 hours it makes a great Christmas Eve listen. Turn off the TV and the lights and listen while your own family Holiday magic surrounds you.

I found this gave me a greater appreciation for the film because the essence of each story is wove into one story in the film. I use it when teaching adaptation in my screenwriting classes because it's so well done.

Listen to a sample and I know you'll want to download it.