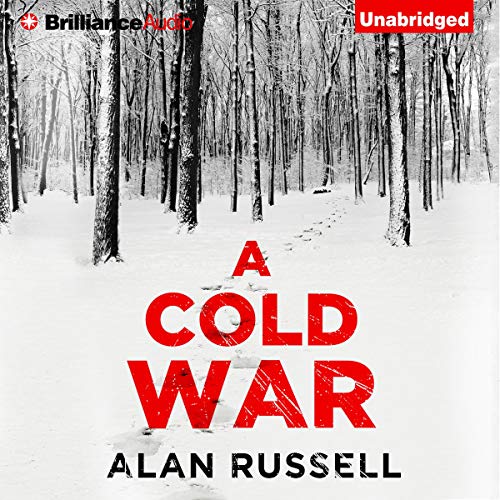 Nina Granville believes her business trip to Alaska will give her a short respite from the merry-go-round that came with her engagement to Congressman Terrence Donnelly. But instead of allowing her the peace she craves, Nina's getaway from the public eye means that no one witnesses her abduction into a very cold hell.

Taken by a mountain man who calls himself Baer and then transported to a remote cabin surrounded by nothing but frozen wilderness, Nina descends into a nightmare of terror, privation, and bitter cold. Nina's privileged life did not prepare her for imprisonment at the hands of this survivalist trapper. If she is to live - and to escape - Nina realizes she must do it on her own.

Undaunted and with startling determination, Nina pits herself against her captor, her fear, and nature itself in a battle for her life - but can she win against such deadly opponents?

What listeners say about A Cold War

Kept waiting for it to come together.

No. It seemed to go on forever. I kept thinking if I hung in there it would be wrapped up with a great ending but it didn't.

Has A Cold War turned you off from other books in this genre?

What about Teri Clark Linden’s performance did you like?

I was surprised at how well she was able to switch voices. The main antagonist was not an easy character for a female to voice.

No way. Too unsettling, gross, and too long without reason for it to keep going on.

I don't get all the great reviews. Felt like an editor should have stepped in and tightened this up. Too many odd plot parts that took away, not added to the story. Readers should know there is a lot of gross and crude dialogue that goes on with the main antagonist. Plus I couldn't find a character that I really liked. I think I was supposed to like the female lead but I just couldn't. Written well, especially dialogue but not tight, without likable characters or a realistic female lead. And it kept going on and on.

Choosing between 4 and 5 stars was difficult because the story is a superb one and the author spends far too many words on a specific part causing boredom on the part of the listener. Ideally about 60 to 90 minutes should be cut from the time that was devoted to repetitive details of Nina's being held by Baer in Alaska.

On the very positive side is the creative use of the poem Cremation of Sam McGee by Robert Service. In my view use of that specific poem, with which Baer (the primary antagonist) was enthralled, added immensely to the story.

So I give this novel 5 stars with some reservations. A Cold War is an excellent suspense novel with a nice surprise ending. The major weakness is that is repetitive and boring near the middle of the book.

It was a good story and I was really into it, when suddenly it seemed like the whole pretense just derailed. I thought it was a tale of survival, which it was. That is where it should have ended.. I thought I was at the end of the book and then saw I had about 2 hrs left and thought "what more?." Then the whole story took a turn in a completely different direction. Kind of spoiled it for me.
Teri Clark Linden did a fine job with the narration. All the different male voices in this one!

You'll need a blanket for this one

I absolutely love Alan Russell as an author. How he tells a story is amazing. I didn't think I'd like this book, but, it was amazing. I didn't see the end coming at all. Such a twist in the story, however it makes total sense to me now. I have read the reviews of others talking about the length of the story, but, I enjoyed it and didn't really want it to end. You have Baer, a homeless looking grizzly man from Alaska, who likes the story of Sam McGee, also who reminds you of the Bush People. He is a survivalist and knows how to survive in the Last Frontier of America. He is readying for the next Cold War. He has thoughts that the world as we know it will soon come to an end and he is hoping to populate it with his seed. Along comes Nina, who is vacationing with her friend in Alaska for a few before her wedding to a man she may or may not want to be with. She is suddenly abducted after a phone call with her fiance, by Baer. As she is locked away in his remote cabin she finds a letter to her from the 2nd Mrs. Baer, who was abducted just a few years before in the same capacity. The letter is a blessing to Nina, It gives her hope and strength to endure and a means to escape. As Nina is preparing for her escape, she is unaware that two men are hopelessly looking for her. One man is the husband of the 2nd Mrs. Baer. The husband is convinced that his wife is dead, but that Nina can be rescued. He takes along a detective and together they trench through the harsh wilderness of the cold winter to help find Nina. I enjoyed this book very much. I also loved to listen to the narrator. She was captivating especially when she told the story of Sam McGee.

I gave this book 5 stars based upon the type of books usually in the "thriller" genre. It's not going to be great literature, but it's a really good story. I appreciated that horror was conveyed without being graphic, and the tale was told without an overuse of profanity.

it was a very good story. I enjoyed the character development. I did not see the end coming.

moved at a nice pace, was very steady in the way the story unfolded. there were enough twists to keep you guessing on what to next.

Would you consider the audio edition of A Cold War to be better than the print version?

this was on Audible's good picks sale, a good find/listen. This needed a bit better editing, but not much. Author has good potential as this story had imagination and gabbed your thoughts from page 1 and never lets go. Worth the listening time.

Yes as you are almost witnessing a POW"s plight.

Note must use new 1.25x speed to get the author's intended pace. This is a new reader for me. Good change of voices, but her main male character got on my nerves. She will need to work on that to become popular. The secondary male voices were ok

yes, when our heroine first reads the journal.

Audible, please keep these type of sales coming as they help us listeners find a good listen

Loved it. Learning about Alaska was interesting as was the story line. I couldn't stop listening.


Unlike most of Russell's books I had a hard time getting into this one, but by chapter three, I was in awe of his ability to create such unique and intriguing plots, the wide variety of well developed characters invokes a sense of familiarity, where the mere mention of the name he feel like he was referring to an actual person and not a character in a book as murder mysteries go this one left out of the cookie cutter mold. And instead of wondering who done it, you were caught up in the thrill of the hunt. My only real complaint is the reader of the audio book, mostly because his voices are inconsistent and seemed more like cartoon stereotypes than in depth creations by the author.

Right out of the gate I was intrigued the creation of Sam McGee by Robert service is a lesser known but that is Lee written poem. My dad often recited it throughout my childhood.

The story was engrossing and kept me guessing, even to the very end, the author seems to have mastered the line between creating rich detail, without taking it too far into the realm of over the chop cheap shocks, like in every book I've read by Russell his characters originally developed to the point of becoming real in my head. The reader on this was phenomenal she grasp the tone of the, the author seems to have intended. The tale was frustrating yet liberating and horrific but hopeful, I loved it.

Not a book I would recommend at all.

Disappointed. I had expected more. It was so so predictable and therefore I lost interest and found it difficult to finish.