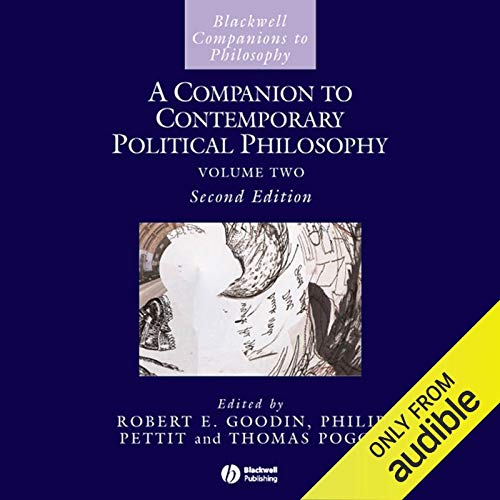 Political philosophy has become an increasingly active area of research over the past four decades. In response to the growing interest in the field, this new edition of A Companion to Contemporary Political Philosophy has been extended significantly to include 55 chapters across two volumes written by some of today’s most distinguished scholars. Straddling analytic and continental philosophy, the first part of the Companion considers the contributions of economics, history, law, political science, international relations and sociology to normative political thought. The collection then provides analyses of eight live political ideologies, including new chapters on Cosmopolitanism and Fundamentalism, and detailed discussions of key concepts, with much expanded coverage of international politics and global justice. An essential reference for anyone interested in this dynamic field, the new edition of A Companion to Contemporary Political Philosophy is the most current and comprehensive resource available.

Robert Goodin is a Distinguished Professor jointly of Philosophy and of Social & Political Theory in the Research School of Social Sciences and a Corresponding Fellow of the British Academy. General Editor of a 10–volume series of Oxford Handbooks of Political Science and founding editor of Blackwell’s Journal of Political Philosophy, Goodin served as co–editor of the British Journal of Political Science and Associate Editor of Ethics. Philip Pettit , formerly of the Australian National University, is now L.S. Rockefeller University Professor of Politics and Human Values in Princeton University. He works in moral and political theory and on background issues in philosophical psychology and social ontology. Thomas Pogge is Professor of Political Science at Columbia University and Professorial Fellow at the ANU Centre for Applied Philosophy and Public Ethics. He is editor for social and political philosophy for the Stanford Encyclopedia of Philosophy and a member of the Norwegian Academy of Science.

"It will provide an unrivalled overview of the principal positions and debates in political philosophy over the past thirty years or so. It should establish itself as the standatd one–volume reader for some time to come." (Daniel Weinstock, University of Montreal)

What listeners say about A Companion to Contemporary Political Philosophy

This is an outstanding collection and it's an absolutely luxury to be able to listen to this on audiobook. My only complaint is that it's read by someone who seems to speak no languages (or have no exposure to languages) other than English. This leeds to a hackneyed butchering of the names of many of the key thinkers covered in this text. Derrida, for example, becomes "Dereeda," making him sound like a commercial snack food. We are also treated to "Mike" Foucault. This is a minor complaint, but it happens so regularly throughout the text that it is quite jarring. It seems to me, that if you're going to narrate a 50 hour long book, it wouldn't be a terrible thing to confirm simple things like how to pronounce its subjects. Otherwise, this is fabulous.

The book covers a broad range of political ideas. The chapters give useful information about relevants questions in political theory in order to enable the reader (listener) to make further studies. The narration is clear and understandable. Great academic work.

An excellent overview of the field

I highly recommend this book (especially the aidiobook version) to advanced students of contemporary political theory. it will be of particular use to grad students. generally well written and comprehensive.

Was it Jefferson that noted that it you want a democracy made up of the ignorant you are looking for something that never was and never can be? Reading this text has helped me to both identify and to address my ignorance. (Maybe Socrates would be proud of me!) What is citizenship? I don't know, but it seems that engaging the topics in this text or similar texts that contain such topics is a good start at answering this question. If there was a social canon of secular scripture, the topics in this text would be candidates for inclusion.

The Quintessence of Verbosity

I was deeply interested in the subject matter, but was disappointed with the density of the prose. The author's narrative was a thicket of insider jargon and unnecessarily complicated terminology. It reads like a master's thesis (not a compliment), rather than like a work genuinely trying to communicate ideas. I finally admitted that I lacked the will to attempt to distill any value from the book.

I just love this book. Each chapter gives ample over overviews over many fields! But the prounoicuation of names are horrible! ”Credo quia ”impossibile” is if course latin, but the last word is pronounced as [imposi’bil], and that’s one example of many. The narrator should stick to pure English texts.

Not read by a robot

I don't understand the previous review unless this has been re-recorded since. Considering it's pretty solid academic content the reading is fine.

The robots are taking over

Would you try another book written by Philip Pettit and Robert E Goodin or narrated by Eric Michael Summerer?

I would be very interested in audio books by Pettit and Goodin that were not being read by a robot.

What was most disappointing about Philip Pettit and Robert E Goodin ’s story?

Nothing - I couldn't get past listening to the robotic voice

The narrator did not narrate; it is obviously a series of short phrases that have been digitally manipulated in order to provide the affect of narration.

What character would you cut from A Companion to Contemporary Political Philosophy?

It IS vErY diFFiCuLt to ListEN to a RoBOT speee K inG FoR 50 HO ur S...ThIS is WHat BeINg rippED ofF SoU n d s LIke

A heavyweight listen ideal for autistic level commitment to detail. The narrator could be mistaken for a robot as every word from the text is relentlessly spoken and can become a bit distracting.. perhaps an accompanying PDF would help?