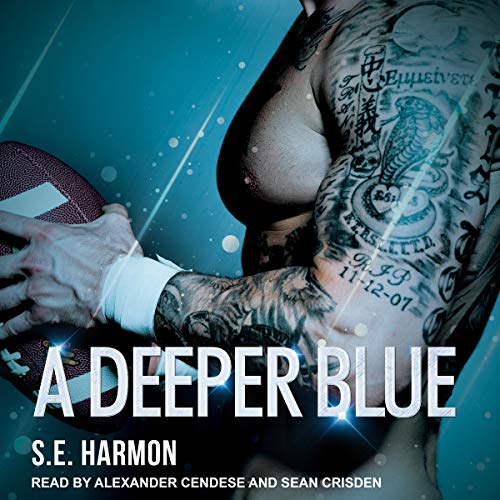 A year ago, Kelly Cannon couldn't imagine he'd end up with his formerly straight best friend. It's hard to believe he can finally kiss Blue anytime he wants...as long as they're in private. And there's the rub. Despite Kelly's promise to wait until Blue is ready to come out, he's tired of sneaking around. The cracks in their relationship are starting to show, and there might not be enough Spackle in the world to fix them.

Britton "Blue" Montgomery may not be the physics brainiac his boyfriend is, but he's not stupid. He knows Kelly isn't completely happy, but he's not ready to be the poster boy for bisexuals and gays in the NFL. He just wants to keep his head down, play the game he loves, and go home to the man he adores. Is that too much to ask?

With the truth slowly coming to the surface, Blue must make a choice. If it means losing Kelly, there's no decision to make. He has to find enough courage to face the music and hope they'll survive the fallout.

Man. Happily ever afters may not be just for Disney princesses, but they sure are a lot of work.

What listeners say about A Deeper Blue

The diary of a real football fan.

To give you a little of my background I am the mother of a professional football player. So that’s why this story only got three stars from me. I understand this is fiction but the way that Kelly bitched and complained about Blue’s football career really pissed me the fuck off. Yes I am one of those mothers who tells their son to dust it off and get the fuck back up. Yes my son has been hurt, yes my son has been carried off the field. I am a diehard football fan and I love my son.

Another thing that really pissed me off is that neither one will man up half of the time to tell each other the truth on how they were really feeling. Blue did the most stupid things and got pissed off when he got caught. I was yelling at the book for Blue to grow some fucking balls and take responsibility for your actions, not act like a fucking two-year-old who got their hand caught in the cookie jar.

If it wasn’t for my OCD of finishing books I would have stopped listening after the confrontation between Blue and his brother. I also didn’t care for the first book that much but thought things would get better in the second book and I just open up a totally different can of irritation.

I wanted to really like this book but it was just OK. There was nothing special about it and there were too many different things that rub me the wrong way about the storyline. I never really fell in love with the idea of Blue and Kelly being in a relationship.

A great second book to a sweet series. Sharp, witty and super funny. The banter and situations will make you laugh and cry out loud. They narration was as superlative as the first. I highly recommend this series!

Kelly and Blue are too cute. Alexander Cendese and Sean Crisden’s narration is so enjoyable.

this book is better then the last one. I really enjoyed exploring Klue (if you read or listen to the book you will know what I'm referring too). This about the life stuff that can be harder to deal with. its honest and romantic.

I love the chatter between the two men; very funny and entertaining. Their relationship is so beautifully written. The narration is so perfectly done. Loved it. Especially Blue. Can't get enough. So cute together.

This is a perfect sequel to the first book. Their relationship further develops and we understand how complicated it is for Blue to come out. This is the gist of the second book. It's sad that life can be so complicated over something so simple as sharing the one you love with the world.

Their intimate scenes only get better. hot hot hot! :P

This book is definitely worth the listen. Don't miss out. Enjoy!

this book was great...kellys freak out in the mens room to his funny striptease was Pricelessly funny. Then add in all the touchy feely Blue moments and you have a winner. and you can't forget about waffles, she was adorable.
so happy reading

Tho book was much more light hearted the first book. Blue was understandably torn between his career and Kelly, the love of his life who is also a man. Jelly has been Blue’s lifelong best friend and is tired of living in the shadows. The narrators have done a great job of expressing each of the feelings in a realistic manner.
S.E. Harmon has written another winner and I highly recommended this book.

love it love love it

i love the fact that the book. i need a book 3 neeeeeed.the character as grown i am obsessed with the narrators.

I love this series so very much; Kelly and Blue are such amazing characters. The storyline is great and both narrators are wonderful (but Alexander Cendese is my fav).

Excellent story. Fantastic narration. Laugh out loud funny banter. I highly recommend this book. It was more than worth the credit. Not many stories end in such a satisfying manner. I am definitely going to read/listen to more from S. E. Harmon. I am always impressed by Mr. Cendese and Mr. Crisden's narration.
What a great time I had hearing these characters come to life! Get it; you won't be sorry! Enjoy!

Loved this as much as the first one, Blueprint. Kelly is sarcastic and quick witted while Blue is sweet passionate. I love a GFY and this hit all my buttons. Sweet, sexy, funny, it had me laughing out loud. I will probably listen again.

Brilliant!! I loved the story this time around...yes, even Blue, although I still wasn't quite sure about Sean Crisden narrating him BUT Alexander Cendese as Kelly?? Amazing, in fact chapter 16 [according to Audible] was so funny - the physics conference with Connor trying to talk some sense into a very stressed out Kelly - I was laughing my head off at 4.45am this morning [bloody insomnia]...of course, hubby wasn't too impressed with me but I really couldn't help it, I just got the giggles at the thought of explosive diarrhoea and all the things Kelly threatened to do to Connor when he got his mojo back. The story ended superbly well too, with more laughs. I have to say I've really enjoyed these two stories...any chance we can get a catch-up in the future??

So much wasted potential.

I loved these characters and really enjoyed book one. I saw so much potential in book 2 and most of the book was great. Then... nothing.

The ending was... wave a magic wand and tada! All problems solved! All the angst, all the built up tension let out like a popped balloon. I've rarely been so disappointed with an ending. Blue's jump from football is his life and he could never come out, to suddenly changing his entire life in one day, then story is over.... I mean, what??! I mean, fair enough, it made sense for everything to happen quickly once the decision was made, but.... where did the decision come from??! How did Blue jump from "no way!" to "right now".

On that note... the mum presented a fantastic opportunity for Blue to realise what his behaviour and choices were doing to Kelly. For some consequences and character development to occur. But no. The thing with the mum was built up like a big thing and then they did the stupid "we're blood related and that makes us family" stuff that always annoys me, and that was it. What wad the point? Couldn't it have been tied it into the actual storyline at least. Parallels drawn. Blue realise he was becoming like his father. etc. Instead the sideplot was one more thing that just... Did nothing. Like the rest of the tension.

Seriously, after everything Kelly went through, he deserved more acknowledgment of not only how patient he'd been, but what Blue himself, his behaviour had put Kelly through. And the tension should have been properly resolved, the angst lead to something, rather than a magic fix.

This book takes up about a year after the previous book left off Kelly and Blue are together , I cannot get enough , the first book was wonderful and this , book two has left me speechless.
Written wonderfully , loved the story line that was continued perfectly..
They overcame their struggles which made them so much closer and I mean closer !

The ending was so... them. Funny and heartfelt and everything that is close to my heart..
A brilliant audio book...perfect narration.

Physics professor, Kelly Cannon, and NFL footballer, “Blue” Montgomery, have settled into a loving but bumpy relationship, grappling with family, their jobs, and the uncomfortable fact that Blue is still in the closet. SE Harmon not only writes sympathetic characters, she also writes hilarious and snappy dialogue - it’s fun just for the quips. I’d love a third book about Blue’s exit from the NFL and his adjustment to life as a normal person. 🎧 Alexander Cendese and Sean Crisden totally deliver on the characters, the voices, and the jokes.