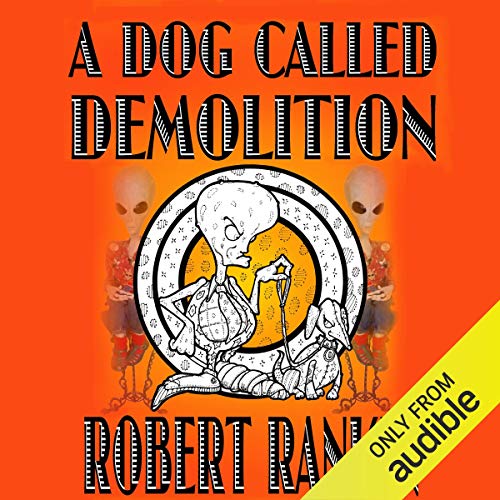 Danny: The portrait of a surreal killer. Each one of us has an invisible space alien perched upon our shoulders controlling our thoughts. This is not a good thing!

Danny used to be a sad and lonely man, but now he is happy. Because now Danny has a dog of his very own. A nice big dog with a waggy tail and a smiley face. The dog’s name is Demolition but only Danny can see him.

Men from The Ministry of Serendipity are monitoring Danny’s every move. They have a special agent on the case, his name is Parton Vrane and he is half man and half cockroach.

Described as a nightmare journey to Hell and back, with only a brief stop off at a KFC for a quick bucket of grub and a visit to the toilet, A Dog Called Demolition is a genuine horror story. Where Silence of the Lambs and Seven merely dipped their toes in terror’s icy waters, Robert Rankin boldly takes off his lurex sock and really puts his foot in it.

What listeners say about A Dog Called Demolition

Completely, but not utterly, insanely funny. Rankin may not be a genius as such, but he’s clearly a genius of sorts. As unlikely as it may seem, he’s also the best narrator for his own work imaginable, proving once and for all that, if it’s mind bogglingly nutty weird and strangely funny, it comes from England. The great thing about this being an audiobook is that you don’t have to put up with any of that bizarre spelling the British can’t seem to overcome. No offense intended, I’m just sayin’.

Robert Rankin is a great narrator. The book took a little too long to come together, but the narration was so good that I was able to wait it out.

Even if you add some aliens and a few attempts on dry english humor in science fiction category doesn't mean it gets a Hitchiker kind of book. Actually it is pretty rubbish.

I read this book when it first came out years ago and loved it then. the book is narrated by Robert himself which makes it very special as he narrated it perfectly.

loved it from start to finish.

Your Next Tall Tale

Reading a Robert Rankin book is like reading a transcript of a story someone told down the pub. Listening to Rankin read one himself is just like being there.

A Dog Called Demolition is one hell of a tall tale (think 'Everest') interspersed with seemingly unrelated, and increasingly far fetched, short stories - a structure that seems ideally suited to the audio book format. I've read this book a few times over the years and thoroughly enjoyed it, but hearing it read by the author has made me enjoy it all the more. Rankin tells you his tall tale in a way that fully engages you as if you were right there with him. And when it seems that it can't get any more preposterous, it does! And what tall tale would be complete without revealing that one nugget of "truth" at the end?

If you're looking to try Rankin for the first time in audio, start here. If you already have and want to hear another one, this is it. Basically, your next Robert Rankin audio book should be A Dog Called Demolition.