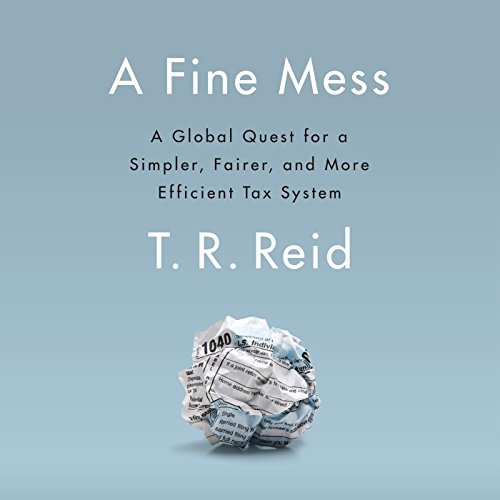 Best-selling author T. R. Reid voyages around the world to solve the urgent problem of America's failing tax code, unraveling a complex topic in plain English and telling a rollicking story along the way.

The US tax code is a total write-off. Overstuffed with loopholes and special interest provisions, it works for no one - except tax lawyers, accountants, and corporations, that is - certainly not me and you. Not for the first time, we have to tear it up and start over. That happened in 1922, and again in 1954, and again in 1986. There's a pattern here; we reach this point every 32 years. Which means the next complete re-write of the tax code is due in 2018. Can we write a new tax code that is fair and simple? Can we cut tax rates and still bring in the revenue required? In fact, we can - by learning from the world's other democracies. Around the world, wealthy democracies, from Estonia to New Zealand to the UK, have all reformed their tax codes, while the US has languished. With his penchant for making complex subjects accessible and even fun, T. R. Reid travels the world in order to find out what makes for good taxation (if that's not an oxymoron!) and brings that knowledge home.

So byzantine are the current statutes that by the government's own estimates, Americans spend six billion hours and 10 billion dollars every year preparing and filing their taxes. In the Netherlands it takes 15 minutes! Brilliantly successful American companies like Apple, Caterpillar, and Google pay effectively no tax at all because of loopholes which allow them to move profits offshore. Indeed, the dysfunctional tax system has become so easy to dodge that it is a major cause of economic inequality, as Warren Buffet and Thomas Piketty have pointed out. But it doesn't have to be this way, the ever-intrepid Reid proves, crisscrossing the globe, from the Czech Republic to Mexico. Doing our taxes may never be America's favorite pastime, but it can and should be so much easier.

“[C]harming.... Reid takes us on a world tour of tax systems and the efforts to reform them. He approaches this most disliked specialty of the dismal science of economics with a wry voice and a light touch...a rich and sturdy fabric of facts presented in plain English. As a longtime Washington Post foreign correspondent, Reid knows how to make the distant seem close. His eye for the telling detail is sharp.... Those unfamiliar with economics, accounting or tax law will be better able to understand these subjects by reading 'A Fine Mess.'... With enough readers, Reid might even help us to initiate real tax reform by replacing a tax code so complex it includes the anti-complexity rule in Section 7803(c)(2)(B).” (David Cay Johnston, The New York Times Book Review)

“An exploration of the absurd complexity of the American tax system and an astute comparison to many examples of simpler, effective tax collection by other governments around the world. Throughout his well-reported, clearly written exposé of United States tax policy, [Reid] reveals the follies of the concept of American exceptionalism and the misguided pride of presidents, members of Congress, and Internal Revenue Service commissioners.... Though Reid's topic may be anathema to many readers, he makes it relentlessly revelatory and simple to understand.” (Kirkus Reviews, starred)

What listeners say about A Fine Mess

Excellent summary for those looking to understand taxes

Being a bit of a tax nerd, I was especially interested excited to read this book. It provides concise information on all of the different tax regimes worldwide in a comparatively unbiased way. You can learn about what other countries have done over many years, what worked, what didn't, and likely why. I think that even those that aren't that interested should read this book for an easy to understand summary of different tax policies. There are so many incentives out there and it's hard to sometimes follow what is being proposed by our government. This book will make you feel like an informed citizen, especially given all the talk about tax in the news. For those interested in getting to the facts on tax in a non-sleep inducing way, this book is probably for you.

There were many times in every chapter where the author had to record at a different time I think because his voice changed significantly. It was very distracting and unacceptable from a director who directed this narration. I can understand a couple times of this but it felt like over 50 times. I’m not sure if it was that high but it was so distracting to me. Maybe it won’t be for you. The content though was superb, I highly recommend!!

Excellent info for all taxpayers

It really isn’t that hard to create a better tax system, except for all the short-sighted politics. This book provides an excellent overview of tried and proven options. All that is needed is...

I think we might see real change if more folks read this book. Really like that it is backed by data. Lots of history as well.

T. R. Reid is a reporter for the “Washington Post”. He is not an economist. However, he suggests there are more equitable ways of taxing the American public than presently used by the government. Reid's travels around the world investigating other countries tax systems are the basis for his theory for cleaning up America’s “…Fine Mess”.

Reid suggests a tax overhaul is due in America. The last major revision was over 30 years ago. He argues a mess has been created by incremental tax changes that have greatly exacerbated the wealth gap in America. Reid illustrates the many ways in which the American tax system is a mess. An often-quoted factoid is “Warren Buffet is taxed at a lower rate than his secretary”.

There are many economists that would agree with Mr. Reid. The most famous is the French economist Thomas Piketty who wrote “Capital in the Twenty-First Century”.

Incremental change of the tax code only makes it less intelligible. In Reid’s opinion, it is all or nothing. Reid implies “go big” or “go home” because nothing will change if the entire tax code is not replaced.

So I read a book about taxes...

Not your usual night time read, but probably the most engaging and entertaining a book about taxes could possibly be. Very impressive job by the Author!

Listened to it twice!

Recommend this book to anyone, regardless of your familiarity with taxes, etc. Very engaging and educational -- a feat that few books accomplish!

Lots of stories and great arguments about what makes a better tax system. I've learnt a lot about history of other countries. The author is very knowledgeable. Overall an interesting book.

Excellent job in explaining a complex problem, and applying critical lessons from around the world. Also quite discouraging because it’s clear how embroiled our tax system is with special interests, big money and influence, and the current political environment. Nonetheless, should be required reading for every high school and college student, and certainly every person who runs for public office.

Not what i thought it was going to be. The theory around the entire book is to throw the rascals out of congress and make a fair tax system that is of course his notion of fairness. No uniqie insights and mostly a compilation of common knowlege.