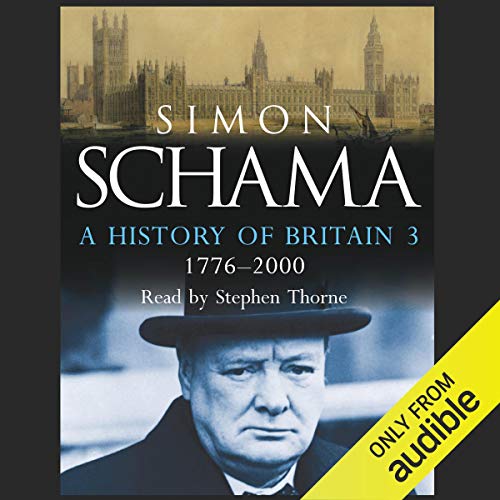 Award-winning historian Simon Schama completes his monumental three-volume history of Britain, which accompanies the acclaimed television epic. In The Fate of Empire, Schama illuminates the period of British history from 1770-2000 through a variety of historical themes, including the advance of technology and industry, women's increasing role in society and the burgeoning British Empire, and key British characters such as Wordsworth, Burke, Queen Victoria, Churchill, and George Orwell. Lesser-known lives are also illuminated, such as Elizabeth Garrett Anderson, the first woman doctor; 'Mother' Mary Seacole, the forgotten Caribbean nurse and heroine of the Crimea War; and Dadabhai Naoroji, who, in 1890, became the first Asian MP.
©2014 Audible, Inc. (P)2014 Audible, Inc.

What listeners say about A History of Britain, Volume 3

History come vividly alive, with people and events throughly analysed and colourfully, masterfully explained. The narration is excellent too. Not to be missed. Brilliant work by one of Britain's finest historians.

Timothy West is my favourite reader

This is my first Simon Schama and I loved it. He is funny and clever and kind. Timothy West is my perfect reader for a certain kind of Englishness. I adore his readings of Trollope.

A favourite entry in my audio library

This series is one of my favourite audio series in my library. I regularly rotate audio books out of my iPod Touch library to make room for other audiobooks, but this series always stays. The narrator's tone aligns wonderfully with the author's writing style. This series meets my expectations perfectly - there's a lot of history to cover so of course the author had to be choosy regarding what to emphasize. If one of his intentions was to spark the reader/listener's interest and use this series as a jumping-off point for our own explorations into specific periods of history, then the author was successful. I have absolutely no regrets at all about purchasing this audio series. Both the narrator and the author are excellent story-tellers

This is a very intellectual version of his history that lacks the human element of good story-telling. He seems to miss out things we 'should already know' so it ends up being patchy and full of dense and inaccessible and obscure insights. Just didn't engage with this at all

Fantastic work, excellntly presented, an Audible classic. i would highly recomond this to anyone studying history or even simply looking to hear a good story which this is full of.

Good listening, but a lot to take in!

I enjoyed Simon Schama's take on this period. I will need to hear it several more time though to take it all in.