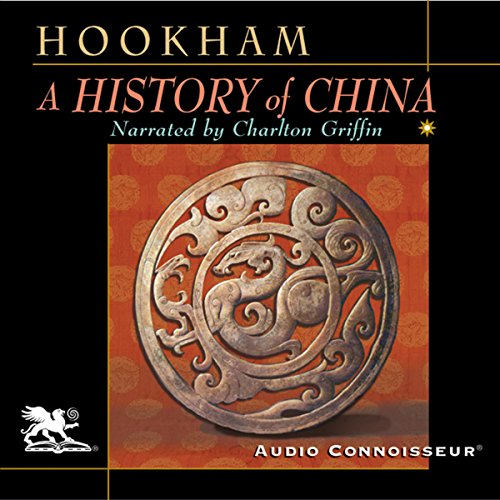 A History of China

Trying to squeeze an entire history of Chinese civilization into a brief, one volume account is a formidable task, but one that has succeeded brilliantly here. Hilda Hookham has provided us with a concise story that, while not getting too entangled with personalities and cultural issues, manages to navigate the swirling passage of events that comprise over 3,000 years of Chinese political history. As a result, one is left with a singular impression of what Chinese civilization has meant, both as a cultural reality, and as a historical political force. It has been a tumultuous journey.

Recurring themes repeat themselves in dynasty after dynasty: order and statecraft, resource allocation and use, imperialism and population growth, barbarian invasion and subjugation of outlying districts. Each dynasty right up to the current communist regime has followed similar paths. In this brilliant synthesis, we begin to see the patterns of stable government, the building up of infrastructure, reforms to help the peasantry, and reforms of government bureaucracy. Then comes the destabilizing influences of corruption, debauched court life, demands for greater taxation, failing infrastructure, famine, military revolt and invasions by barbarians. The peasants revolt, the military crumbles and a new dynasty takes control, with or without the support of foreign powers, depending on the period. Eventually, as in the case of the Mongols and the Manchurians, the barbarians end up as rulers.

Throughout all of this turmoil, the essence of Chinese civilization has endured, sometimes, as in the case of the murderous Mao regime, at the cost of millions of lives. From Confucius and Lao-Tzu to Sun Yatsen, Chang Kaishek and Mao Zedong, Chinese civilization unfolds here in this audiobook as a comprehensible and highly enjoyable summary.

Audible Can Do Better Than This

After scouring the offerings for a general history of China, this seemed closest to what I sought. While it fit the general-history-of-china bill, Audible can surely offer a general history of China that is better than this. It was written decades ago and may have been a solid piece of scholarly work at the time, but I found it to be meandering and use language of otherness from which more updated histories have departed. It includes an "update" that isn't terribly satisfying or nuanced. I don't recommend it.

One damn dynasty after another

More of a list of dynasty names than a history. Few ideas are discussed - what were the intellectual movements- in art, poetry/writing, science etc. Here it would seem that other than controlling water flow in the rivers, and the masses were poor not much goes on.

Most of this book is a rather pedestrian and superficial overview of China's various dynasties. Then comes a scathing critique of the Nationalist regime, followed by an unapologetically adoring portrait of Mao. The idolatry is then partially ameliorated by an unattributed addendum briefly listing Mao's crimes.

Ok, I am a Marxist History writer, I spent my entire college career studying Marxist Criticism, but I am sorry, this is not even Marxist History. Insufficient statistics, inadequate class analysis and overall lack in economic insight and cultural experience of lower class made this history nothing more than Maoist properganda.

But one should take into consideration that the book was written in 1970, Mao was still in power and all the statistic released by China were distorted to paint a very rosy picture, plus considering what US was doing in Vietnam, the author may be trying to dealve into the leftest scholarship fashionable in the 1970s as a reaction to what she saw as a imperial venture. Read in this light, we can probably understand why she espoused to such an uncritical stance to Maoist textbook, she wasn't writing history, she was protesting foreign intervention. Readers, please make sure you have a strong stonach before you read this book.

I agree with the critics -- this is outdated and biased. I enjoyed reading the review from the Marxist historian who disowned this book -- evidently it doesn't even live up to the 'standards' of Marxist history. The performance is also so bad that it is almost funny.

A decent overview, with some shortcomings

What did you love best about A History of China?

A decent overview of the history of China until the 1949 founding of the People's Republic.

This is the third audiobook I have listened to on the subject of China. Narrators should be coached on the proper pronunciation of Chinese names. It doesn't have to be exact, but there are ways to better approximate the pronunciation within the confines of the English language. I suppose it's ok for a casual listener with no knowledge of the Chinese.

The book was written in 1971, after the fall of Liu Xiaoqi, but before the PRC displaced Taiwan in the United Nations. The entire history between 1949 and 1971 sounds as if it was authored by the CCP, which perhaps is not surprising since most foreigners were kicked out of the PRC after its founding, and it was difficult to independently verify the little information that did flow out. With that in mind, it is still a good read for the pre-1949 history.

Reasonably decent overview of Chinese history. Be aware, she is a total, blind apologist for the Chinese Communist system. Hookham acknowledges NONE of Mao & his party's atrocities -- Mao is one of history's worst mass murderers, but you wouldn't guess it by this book. Mao's true nature, & recent Chinese history's truth is acknowledged in a epilogue (the author of this is not mentioned). Shortly after you hit the 1911 revolution, you can pretty much ignore the rest of Hilda's book as pure Chinese communist propaganda.

The book is a long Marxist tale building up to a almost religious praise and biography of Mao. The publisher have even added an addendum pointing out that the book is not historical correct regarding the communists.

Well worth 11 hours of listening time

A concise but far-reaching history, from a pro from Maoist perspective. This is not my perspective but still, as someone with little knowledge about Chinese history, I found the book quite informative -- until the penultimate chapter which shows the writer had little understanding of China in the 20th century . Fortunately the final chapter addresses the shortcomings. Three cheers for the narrator -- fabulous

Extraordinary Repudiation of Author in Own Book

The addendum was a pleasant surprise - setting the record straight after the author committed scholarly malpractice with regard to the last chapter.

This must be truly unprecedented - the publisher added an addendum vigorously repudiating what was in the book. The author willfully and obviously neglected to write an accurate portrayal of 20th century events. Fortunately the addendum set the record straight. With such a biased and misleading last chapter, is it not reasonable to suspect that the rest of the book is biased and misleading as well? It also begs the question: with such a poorly written last chapter which the publisher dutifully points out, why would Audible.com make this book available at all? Surely there are better books on the history of China.

Not up to date

Though still a useful introduction to Chinese history, this book is rather dated. The past decades has completely re-written many aspects of chinese history, and today there are so many better books available on the subject (though, apparently, not yet as audiobooks).

Fantastic review of a huge component of history

Great amount of detail on so many aspects of life. I felt immersed in each dynasty's way of life without being overwhelmed.

Did not see that ending coming! The book being completed before the atrocities of the Mao regime were made global knowledge really makes you think about the frame the author was viewing 20th century history. The appendum written a few decades later is brutal but a necessary addition.