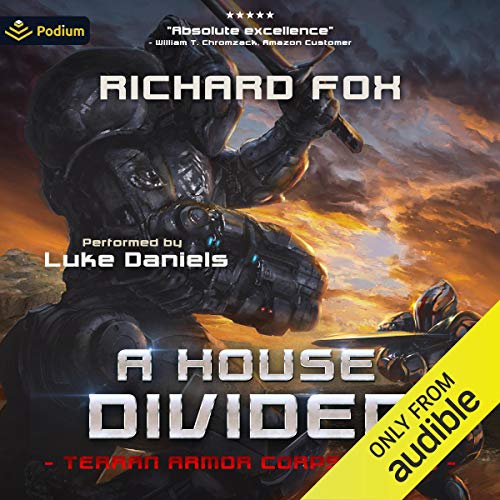 A crisis grows in the heart of the Terran Union: one that threatens to tear the Iron Dragoons apart.

When Roland and his lance rescue an Ibarra crew from a Kesaht attack, those saved become a pawn in a conspiracy that could turn the galaxy against all of humanity. Earth’s senior leaders must sacrifice the captured crew to preserve the peace, or risk war with the Ibarra Nation. But Stacey Ibarra and her lieutenants have plans of their own.

Roland, torn between his duty as a Templar and his loyalty to his home world, is thrust into the struggle between the Ibarras and Earth. He must choose between the factions, and there will be no turning back.

The next chapter of the Dragon Award-winning series will forever change the Ember War universe.

What listeners say about A House Divided

Great addition to an incredible series

I enjoyed the Ember War series and Richard Fox delivers, again, a great addition to the series, I highly recommend if you are a fan of Military Science Fiction.

another great story in the series

he Narrator is absolutely Awesome again. he story keeps me wanting more. This is a must listen to series

I thought the armor core books would not be as good after the whole Ember War series but boy was I wrong! In its own way, this series is even better and really makes you look at your own moral compass. The characters are awesome and the battles are great. Highly recommended.

I've been through the Ember Wars series and Terra Nova Chronicles which are all fantastic....but Terran Armor Corp? These books are utterly fantastic.

Luke Daniel's hit it out of the park The book was awesome storyline Solid Can wait for Mr. Fox to finish The next one

Best in the series

Great book! I think the author is only getting better. I love scifi with some good moral quandarys

Richard Fox does a great job with this series. The story line is pretty interesting and the detailed descriptions of battle sequences are really good. I look forward to the next book every time I finish the most recent one.

Storyline, characters, and narration are great. You know a book/series is good when you reach the end and get pissed when there are no more. But, there will be I’m sure!

I can't stop listening to this series, I will rip through a book in 1-2 days. I very much enjoy the series and writing style. bravo!!!!

Where do we Go from here?

Okay I gott asy loving the series though I've lsot all respect for a lot of the characters after reading. won't spoil but I am hoping Some of them in the next book realize some things and don't well wind up cold uncaring murderers like one seems to have in this one

Really enjoying the series as the story develops. Looking forward to listening to the next one

Was looking for forward to it coming out, but rather disappointing seems to have lost all the human touch, not sure of the next, maybe another long time. Not the best.

I really did enjoy this 1 all the chaos and the hatred. Plus the loyalty and friendships made is awesome