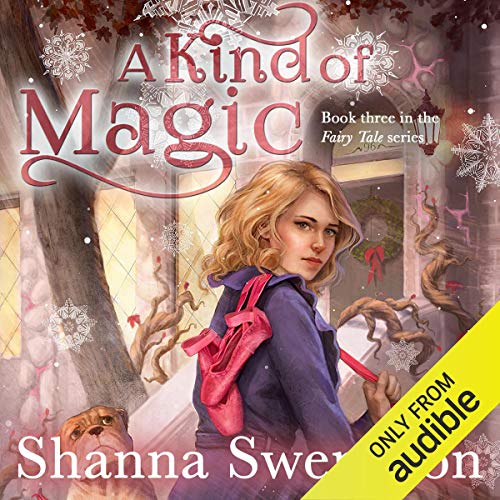 A Kind of Magic

The holiday season in New York City is supposed to be magical, but it's not yet Thanksgiving, and what's happening isn't that kind of magic. The fairy world seems to be bleeding into the human world. Strange white horses carry people into the Central Park lake. Children are disappearing from their beds. Unearthly snow flurries pepper the air while odd pockets of summer appear randomly in Central Park. There's even a suspicious wave of injuries among Broadway dancers and ballerinas, who feel like they've danced all night. Noticing this, outside enchantresses are converging on New York to stop what they think is a fae incursion.

Sophie Drake knows the fae aren't to blame, and she suspects that one of the enchantresses is up to no good, creating a situation that will put her in power. But revealing how she knows what's happening would mean revealing her own fae ties to the anti-fae enchantresses. Not that she has time to deal with any of this. She's been offered a major ballet role in The Nutcracker - a chance to revive her dance career. She can't miss a step onstage as she tries to thwart the power play and balance the realms without running afoul of the fae or the enchantresses.

Same thing as the previous books

What disappointed you about A Kind of Magic?

Sophie is just as "bad ass" as she ever was, which was absolutely not. The characters always boasted about how "bad ass" Sophie is and how no one should get on her bad side. But she does nothing and is incapable of doing anything. From a normal human to a queen to a princess, she is the most useless [Blank] ever.

Would you ever listen to anything by Shanna Swendson again?

Nope. I only listened to this due to Suzy Jackson.

Have you listened to any of Suzy Jackson’s other performances before? How does this one compare?

Suzy Jackson is as amazing as ever. I really enjoyed her performances.

If you could play editor, what scene or scenes would you have cut from A Kind of Magic?

Rather than "cutting" scenes from A Kind of Magic, I suggest Shanna Swendson changing her way of writing. Rather than nailing plot points into the book and then forcing the rest of plot to fit it, use the plot points are milestones and work the plot towards them. I really suggest her developing the plot and not forcing it.

For instance, when her characters make a relatively important decision, would anyone off the street also make a similar decision? If it's no, and in most cases, it's a big no for her characters, then it's a big issue. Characters aren't natural. Think of a movie or show, the actors aren't acting anymore. They became puppets and are being controlled and manipulated by strings.

Loved it! Enjoyed being taken out of the real world for a while! Highly recommend!

I love this series.

This was very fun to listen to. It is a cute story. The characters are endearing. The world that she created in the fairy realm is enchanting and I like that the fairlys are both good and bad. Can't wait to find out what happens next. Hope the next book is coming out soon.

Sometimes I'm surprised by the books I enjoy. This series was a nice surprise. I wasn't ready for it to end. An excellent performance
by the narrator.

I enjoyed the concept and content of the book. Narrator needed practice, just too slow.