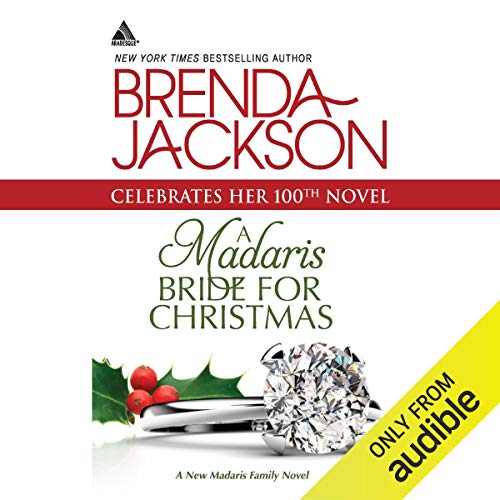 A Madaris Bride for Christmas

In her hundredth book, New York Times and USA Today best-selling author Brenda Jackson blends heated sensuality and drama into a dazzling new novel featuring one of her most unforgettable Madaris heroes yet.

One by one, Madaris' men have surrendered to the matchmaking schemes of Felicia Laverne Madaris, matriarch of the family. But Lee Madaris isn't letting anyone else control his destiny. He'll bring a bride of his own choosing to the family's holiday gathering - if his hotel's gorgeous new chef will agree to a marriage of convenience.

It's not just the chance to work at the Strip's hottest hotel that brought Carly Briggs to Vegas. Witnessing a crime in Miami may have made her a mob target. Though she's reluctant to complicate their working relationship, Lee's tempting offer is so hard to resist. And soon, desire is clouding their no-strings arrangement.

The danger that made Carly flee Miami is about to land at their door. So Carly and Lee must decide who to trust, when to let go - and whether a love they never anticipated is strong enough to pass the ultimate test.

Would you listen to A Madaris Bride for Christmas again? Why?

of course! this was a great listen. you have it all in this book!

when lee thought he out smarted his grand ma

Which character – as performed by Pete Ohms – was your favorite?

i did listen to it in on sitting, i had to know what was going on

2 of 3 people found this review helpful

Not the narrator for this

Carly and Lee hit it off right away. Out celebrating her birthday she meets the man that would soon become every thing to her and her to him. Moving to make sure he could prove he was in control of his own world Lee finds that sometime it about more.

There was some passion, chemistry, threats and danger. We even get to see some old Madaris family favorites. This years holiday celebration had more to celebrate.

Narrator Pete just did not do the job for me. The whole time I was want it to be over with. I love BJ’s books but this narrator took something from it. So I just was not as excited as I might have been. Always love getting a new romance with a little mystery, suspense and even some danger when reading a romance in the Madaris family and friends.

The story line is so intriguing. You all must listen to this wonderful story. I couldn't stop listening

this book was wonderful i enjoyed it! especially at this time of the year. wish it was longer!!

this could have been told in a shorter time span. the ending was very rushed. other than that it was the typical quest to love story.

Enjoyed the narration of this book. this is a mus

I love this book, Grand Mother Luverne is the best. The Madrises! Love this family!

This is one of Brenda's best Madaris stories!

I read this over and over periodically since it was first published. All of the Madaris series are worth ordering on Audible, however.
Pete Ohms is THE BEST narrator of all time!!!!

The story was a good bad great type. A loner & a well to do getting together and having a grand time with each other with no outsiders trying to break them up. Showing how all walks of life can be tougher & enjoy each other.