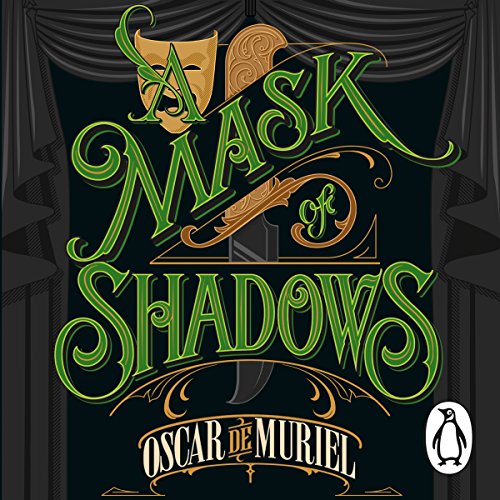 A Mask of Shadows

It is 1889 and The Scottish Play is coming home. But before the darling couple of London theatre, Henry Irving and Ellen Terry, take their acclaimed Macbeth to the Edinburgh stage terror treads the boards. A grisly message is found smeared across the cobbles in blood, foretelling someone's demise. As the bloody prophecies continue to appear, Edinburgh's own beloved pair - Detective 'Nine-Nails' McGray and Inspector Ian Frey - enter the scene. Frey scoffs at this blatant publicity stunt, while McGray is convinced of supernatural affairs. As they scrutinise the key players, they discover that Terry, Irving, and his peculiar, preoccupied assistant (one Bram Stoker) all have reasons to kill, or be killed.... But one thing is clear. By occult curse or human hand, death will take a bow the night the curtain rises.

"Fun to read and a fast page-turner...love and murder - they go together like strawberries and cream." ( Independent)
"A hugely entertaining Victorian mystery." ( The New York Times)
"This is wonderful. A brilliant, moving, clever, lyrical book - I loved it. Oscar de Muriel is going to be a name to watch." (Manda Scott)
"One of the best debuts so far this year - a brilliant mix of horror, history, and humour. Genuinely riveting with plenty of twists, this will keep you turning the pages. It's clever, occasionally frightening and superbly written...Everything you need in a mystery thriller." ( Crime Review)
"This is a fast-paced, well-researched and thoroughly spellbinding read. The mismatched pair is as entertaining as Holmes and Watson at their best, and the supernatural element brings an entertaining twist." ( The Historical Novel Society)
"I enjoyed this - properly creepy and Gothic." (Ian Rankin)

What listeners say about A Mask of Shadows

Added another author series to my "love this" list

Though this book was a bit long I was immediately intrigued with the author's note and prologue and captivated to the very last word of the story.... Listened straight thru! Skillfully written with historic bits and the narration was an amazing performance, making this a book I will definitely listen to again.

The title to this review should be all the praise needed for the Frey & McGray series. Ye ken?

What made the experience of listening to A Mask of Shadows the most enjoyable?

The narration by Andy Secombe is perfect

The relationship between Frey and McGray - their insults and squabbling makes me laugh out loud.

I loved the arrival of Frey's family to Edinburgh and wished there was more of them. They are all so horrible.

I liked this the best of all the three books because of the huge tapestry of characters including Ellen Terry, Henry Irving, Bram Stoker and Oscar Wilde! I also loved the first book and I think the second was not so much fun and a bit too serious.

I really like the relationship between the two main detective Frey and Mccray. The theatre world and the characters of Irving, Terry and Stoker were ripe for dramatisation. I did find the running about here and there a bit hard to follow at times. Also kept wondering why such a big case with very little actual crime happening until the end....but this was minor and I still really enjoyed the book. Would definitely listen to the next one...hope there is one!

Loved the first two books but found the story not very interesting and very confusing in places.

great characters. story good but not great. enjoyed it overall and will certainly get loch of the dead in near future

I can't wait for the next Frey -Mcgrey Instalment . So enjoyable laugh out loud funny at times and beautifully written.
The narration as always is first class.

I wasn't going to read another de Muriel, but the setting of this one lured me in. (I skipped the second novel in spite of being curious about Nine Nails' sister.) The theatre and the use of real celebrities of the time is an interesting device. Ellen Terry is a welcome relief after all the one dimension female characters: virgins, vixens or servants. Equality of the sexes did not exist in 1889, so being true to the milieu is partly to blame, as is the genre (the male characters are also very stereotypical) but the net result is that the women characters are cyphers.
Then there is the violence. The casual, habitual violence of Nine Nails which is treated as comic relief. A few slaps or punches and the reluctant interviewee starts providing information. Good quality information, not made up stuff. None of the victims of this treatment complains to a magistrate or sends an underling to administer some payback. Fray and McGray are verbally abusive mostly with each other but also with anyone who annoys them. Seemingly most people annoy them by existing and not merely to be of service. This device may be meant to show just how bad the bad old days really were, it too often comes over as vicarious wish fulfilment. Sure, we've all wanted to hit a truly annoying person, but we're aware that its not only wrong, it wouldn't really help a given situation either. In these novels the violence is glorified, in spite of Fray's occasional squeamishness, which is attributed to his finnicky upper class (bourgeoise) ways.
The first part of the novel is hard going as de Muriel plays with the structure, interweaving reports Fray writes later out of sequence. It's disjointed rather than enticing. The way the relationship between Fray & McGray resets each book is also annoying. At the end of Strings of Murder they had reached a point of understanding and a certain mutual respect. Between stories this evaporates and they have to start afresh. In fact they are more prejudiced in book 3 than they were in book 1. Sniping and griping fails to generate tension. I hope de Muriel can find a way to avoid this in future.
None of this would be frustrating if de Muriel was not a competent, even talented storyteller with good research skills. Interesting but repugnant wanes after a while.

I have an odd friendship with Frey and McGray

When I start reading these books - I start by thinking - 'Oh I won't read any more of these, they are getting wearisome ....' BUT by the time I finish - I am chuckling out loud at some of the between character comments. Overall I am really enjoying the books, I love the main characters, but the storytelling is sometimes a trifle arduous and I drift off and get lost in my own thoughts so have to rewind.

I do think that the story could be 'moved along a bit', It does meander and one gets a little confused. What I find odd in my own reaction is that having finished the book - I almost hear myself sighing with satisfaction at the outcome.

Andy Secombe performs excellently, storyline way too long.
I enjoyed the first book but the two have been convoluted. Shame as the character should of been developed more by author.

What a treat A Mask of Shadows is. Full of mayhem, mystery, mocking blacks humour and Macbeth! Another full blown adventure of CID Inspectors Frey and McGrey with no holds barred. Although the authors notes are are least as interesting and entertaining as any book could be. All again delivered very competently by Andy Secombe.

Like the bus first 2 novels in this series A Mask of Shadows is a journey into the era. Not only culturally or socially but technology as well. The characters are wonderfully humans and believable, are developing throughout the books. Beautifully written you are transported to Edinborough and well researched I can’t wait for the next adventure of the 2 unlikely collaborators.