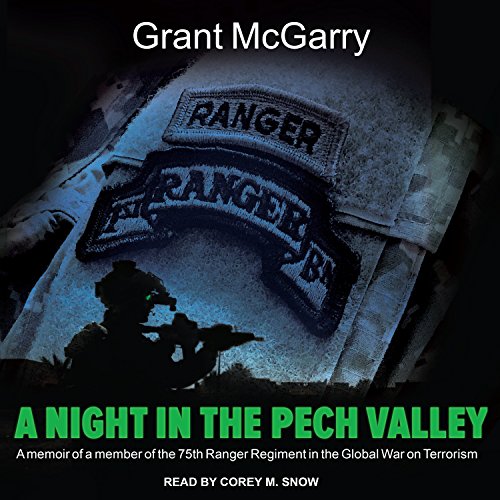 A Night in the Pech Valley

A Memoir of a Member of the 75th Ranger Regiment in the Global War on Terrorism
Written by: Grant McGarry
Narrated by: Corey M. Snow
Length: 7 hrs and 33 mins
Categories: Biographies & Memoirs, Memoirs

A Night in the Pech Valley is Grant McGarry's account of what it takes to become an Army Ranger and what life is like in the 75th Ranger Regiment. More importantly, it is about an operation in the most dangerous terrain for US forces anywhere in the world. The Pech Valley is surrounded by Taliban-filled mountains on the Pakistan border in the Kunar Province, where the mountain peaks push 10,000 feet. On the night of August 18, 2010, a platoon of Army Rangers were on a direct action raid to capture or kill a high value target, and this is the story of the Rangers who ferociously fought through the night and into the next morning. A Night in the Pech Valley is dedicated to Army Ranger, SPC Christopher Shane Wright, who made the ultimate sacrifice in the Pech Valley on the morning of August 19th, 2010.

RANGER UP! Then buy this book

If this doesn't get your blood stirred up, I don't know what will.
I enjoy these style of books.
I'm a wounded veteran also. However, I was so far separated from legitimate action, I couldn't even compare my career in the military with these heroes.
Thank you for your service.
The story flows great, allowing the opportunity for the reader to gain all the info needed for the story. (The writer didn't deliver too much info to make it boring or too complicated)
As a reader it's easy to read this story and be entertained and go on to the next book. The author created this book for that. However, the larger picture was these are Americans, Heroes, Lives lost, Real human bodies injured. Let's don't skip that part by. Even if it's just taking a quiet moment to remember them. Let never forget our heroes!

Compelling description of one Ranger's experience

I'm a heavy consumer of audio books. I enjoy books on history, science, and the occasional piece of fiction. With a son beginning his military career, I've also purchased a number of memoir type books about the military's special operations forces, including Rangers, SEALs, etc.

A Night in the Pech Valley by Grant McGarry is among the best audio books I've listened to. I found the author's story to be an interesting and realistic account of life in the regiment, including what it takes, mentally and physically, for a young man to successfully complete the journey from RASP (aka RIP) through training and deployment. The level of detail strikes a perfect balance: enough detail to paint a realistic of what the author experienced but without boring or unnecessary minutiae. This is the audio version of a 'page turner'.

Finally, the narrator is very good, with a strong, clear voice that avoids the monotone that can ruin a good story.

I laughed when the author mentioned Centennial High School. I live five minutes away from Centennial, my two oldest sons graduated from Centennial and my youngest will be attending next year.

if you're an aspiring ranger, a person interested in the military, or just a person who wants to hear a good story, this delivers. Every aspect of this book is amazing.

Great book, well worth the read. Rest Easy Rangers. Brought me back to my tour in Koyghani OIF X

To the best light infantry in the world!

To the American Spartan, the U.S. Army Ranger. A story of determination and reality of what direct action units are seeing and acting in Iraq and Afghanistan. To the institution, no better place than Columbus, Georgia is where these warriors are made..

This was a great story of one Ranger's experiences in a Ranger Regiment in Afghanistan. highly recommended.

A fantastic book that displayed the character of a ranger well, not to mention the dedication these men have to our country.

Loved it! I haven't read a book this good in years!Will recommend to all my army buddy's

Stories about people like this make you feel bad for those who only read/listen to fiction. Listening to this story sparks an interest in the Pech Valley and other accounts of our Special Operations Forces that have served in the region.