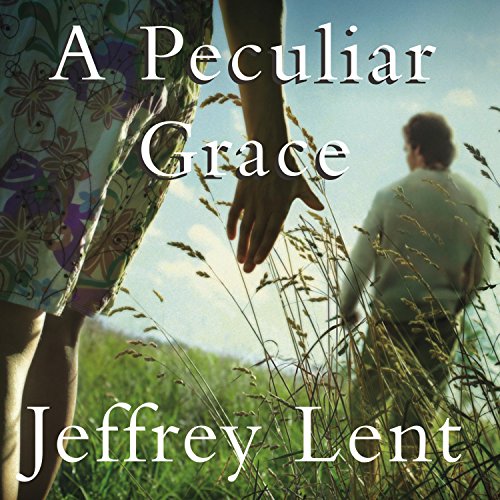 Jeffrey Lent's previous novels have earned him comparisons to Cormac McCarthy, Pat Conroy, and William Faulkner, and his book In the Fall was hailed as one of the best of the year by the Christian Science Monitor and the New York Times. In A Peculiar Grace, Lent has delivered a book that takes his oeuvre in a new direction. It is a brilliant portrait of love, destruction, and rebirth in modern-day Vermont.

Hewitt Pearce is a 43-year-old blacksmith who lives alone in his family home, producing custom ironwork and safeguarding a small collection of art his late father left behind. When Jessica, a troubled young vagabond, shows up in his backwoods one morning, fleeing her demons, Hewitt's previously hermetic existence is suddenly challenged - more so when he learns that Emily, the love of his life whom he'd lost 20 years before, has been unexpectedly widowed. As he gradually uncovers the secrets of Jessica's past, and tries to win Emily's trust again, Hewitt must confront his own dark history and his family's, and rediscover how much he's craved human connection. The more he reflects on the heartbreaking losses that nearly destroyed both him and his father, however, the more Hewitt realizes that his art may offer a deliverance that no love or faith can.

Set in the art scene of postwar New York, a commune in the early 70s, and contemporary small-town New England, A Peculiar Grace recalls Kent Haruf and Wallace Stegner. It's a remarkable achievement by one of our finest authors and an insightful portrait of family secrets, with an unforgettable cast of characters who have learned to survive by giving shape to their losses.

"Another intense exploration of family ties, doomed love, and existential questing from talented, risk-taking Lent." ( Kirkus)
"A transcendent story about the healing power of love and art....Magisterial and...beautifully written." ( Publishers Weekly)
" A Peculiar Grace is the best book to date by one of the two or three most gifted American novelists since William Faulkner." (Howard Frank Mosher)

Couldn't disagree more with the first reviewer. In my opinion the reader accurately captures the tone of a man at the character's point in life. The story holds many surprises that are revealed slowly over the course of the listen. I greatly enjoyed it and will look for other books from this author

A great book. Stick with it. Lent tells a great story, paints a beautiful picture of Vermont and captures feelings that I thought only a women could write.

I so want to enjoy this story, but I am having a terrible time with the narrator's voice. Why oh why do they hire a guy with a city man's clipped, hurried speech to narrate the story of a country man who lives on his own timetable. Did they not read the book?

In addition, the way he tries to mimic a woman with a low country drawl is too painful for words.

This is the first time I haven't been able to get past the narration and just enjoy the book.

I agree with Jane

When I read the comparison of Peculiar Grace to Plainsong, I was very anxious to read it. I think I should have read the book, however, and not listened. The narrator contorts a sensitive story into a chest-pounding melodrama. Surely it isn't what Lent intended. At first I thought the narrator was Scott Brick, whom I avoid at all costs, but this narrator is equally as "dramatic."

Tedious to the end. Characters full of self-absorbed angst and not much else.