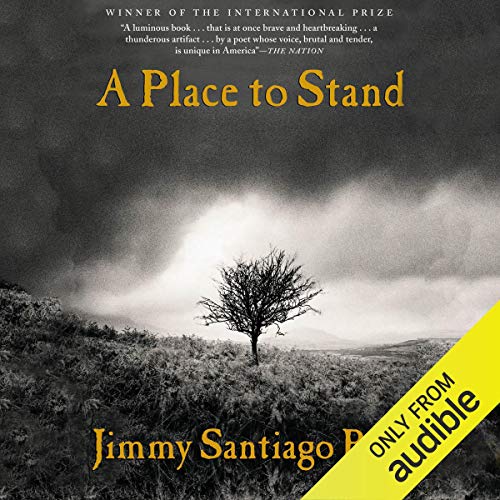 A Place to Stand

Jimmy Santiago Baca has been called an heir to Pablo Neruda and one of the best poets in America today. At the age of 21, however, he was illiterate and facing five to 10 years in a maximum-security penitentiary for selling drugs. Five years later, he emerged from prison with the ability to read and a passion for writing poetry. A Place to Stand is his memoir of childhood on the small farms of New Mexico, his adolescence spent in orphanages and detention centers, his years as a drug dealer in San Diego and Arizona, and his extraordinary personal transformation under the harrowing conditions behind bars.

Life in prison was often brutal, and Baca describes the extreme measures he had to take to survive, from beating another inmate with a lead pipe to slicing an attacker's stomach with a butcher's knife. Although these were acts of self-defense, they landed him repeatedly in solitary confinement. His time in isolation was intended to break his spirit, but it proved to be the catalyst for an extraordinary series of memories and revelations that endowed him with an indomitable will to resist the dehumanization of prison life. Poetry became an essential element of this newfound sense of self, and the act of writing offered a powerful means of transcending his surroundings.

A Place to Stand is a vivid portrait of life inside a maximum-security prison and an affirmation of one man's spirit in overcoming the most brutal adversity.

What listeners say about A Place to Stand

As a formerly incarcerated individual pursuing my higher education, I found this story very relatable. I often struggle finding the right words to express my emotions, Baca has inspired me to continue to strive for a better version of myself.

When all else fails, blame white people...

Another book indiscriminately bashing an entire race of people. I stopped reading this one before chapter two. Don't waste your time or money on this one.

Although this book was written in 2001, the use of the word "fag" and "faggot" were extremely inappropriate. This is so unprofessional and I feel that the book should be updated. It is like coming upon a book today that uses the n word to describe a black person. What was most upsetting about this book is that they used the wrong derogatory term to describe a trans woman; Baca uses the word "fag" once again but it is used incorrectly. Regardless the word itself is hateful, and is basically a fighting word. Other than that there is nothing wrong with the book.

This inspired me as a teacher and an author.

This man is an inspirational author, piet, and story teller. He dropped out of school at age 13, lived a life if crime, went to prison, and taught himself to read and write in English after speaking only Spanish for a majority of his life. After his release at the height of the crack epidemic of the early 1980's Jimmy was reformed and went on to publish countless works of his masterpiece including this book. I first read it in 2015 in my second year at Southern Maine Community College and I have read it at least ten times over the past few years. I would highly recommend to anyone!

because of this story by Jimmy, i am FOREVER changed as a human. thank you Jinmy for your bravery, your beauty, and your humanity 💜

This story is one that proves what ours souls are capable of even after being stomped on repeatedly. This brought me insight into my life and my relationships with others. In fact I plan to listen again so that I can better process the the thought and feelings Jimmy's story invoked.

This book is so insane but such a life lesson to those that think they have it so bad in life, i feel for jimmy. i love how he doesn’t leave a single detail out. Thank you jimmy for this ♥️. Please don’t pass up on this book it’s great and amazing.

Very descriptive, entertaining, also sad that I can related to this emotionally in some ways. Really worth listening to good narration.

This book takes you to places and through situations you may not have ever imagined being or experiencing otherwise. The writer gives such detailed descriptions throughout the book which makes the story come to life. The narrator, Jackson Gutierrez does an amazing job at expressing the essence of every emotion in every moment throughout the book. On a personal note, I have somewhat of a personal attachment to being so intrigued by this book as it allows me to have somewhat of an understanding of what a loved one may possibly have experienced and may still be experiencing.

It was a good story. I read it for class, but ended up recommending to friends and family.