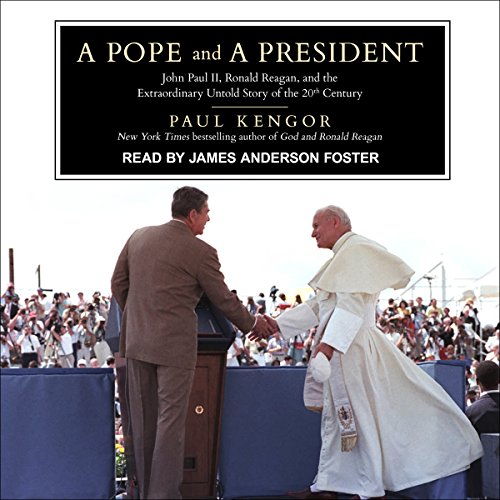 Even as historians credit Ronald Reagan and Pope John Paul II with hastening the end of the Cold War, they have failed to recognize the depth or significance of the bond that developed between the two leaders.

Acclaimed scholar and best-selling author Paul Kengor changes that. In this fascinating book, he reveals a singular bond - which included a spiritual connection between the Catholic pope and the Protestant president - that drove the two men to confront what they knew to be the great evil of the 20th century: Soviet communism.

Reagan and John Paul II almost didn't have the opportunity to forge this relationship: just six weeks apart in the spring of 1981, they took bullets from would-be assassins. But their strikingly similar near-death experiences brought them close together - to Moscow's dismay.

A Pope and a President is the product of years of research. Based on Kengor's tireless archival digging and his unique access to Reagan insiders, this book reveals captivating new details on a relationship that changed history.

What listeners say about A Pope and a President

A wonderful account of two amazing lives and their impact on us all!

I love both of these amazing men! A beautiful account of a very dark time in our culture. How two men, following God’s call changed our lives. If you love President Regan and Pope Saint John Paul II, read this!

This is the best book I have ever read about Reagan.

I loved it so much I bought it in print and in audio. It is something I can read over and over again and still not tire of. I highly recommend this book.

The book “capture” my attention from its title...after that, I was hooked! An amazing work of non -fiction. I grew up in the 80’s but was Not a fan of Reagan. Sadly, At that time I knew little and cared even less about learning my religion. The Pope was a very distant figure whom I thought unreachable. This story, exceptionally researched, absolutely detailed, extremely objective. I loved how the author was able to “paint” a perfect picture of just how intertwined the lives of these to extraordinary men really were. Highly recommend this book to all history, politics, and theology nerds.

I loved it. Found it very accurate historically. As I am a Pole myself this was especially close to my heart. I was not aware the President played such a huge role in the collapse of Communism. I am so glad our beloved Pope John Paul 2 had such a worthy friend. May God be praised for those two crucial People of XX th century.

It is LOOONG, but worth it

This book goes into quite a bit of depth about the relationship between the 2 men in the title. It was truly interesting to see how much they worked together, and how each played a role in toppling the Soviet Union. It gets a bit too much into Catholic mysticism, but, as the writer points out, you have to understand some of that to truly understand what made the Pope tick. Overall it is very informative. #History #InternationaRelations #ColdWar #tagsgiving #sweepstakes

Reading Bios is a great way to catch up on your history. I grew up in the '80s and was too young to have any knowledge of what was going on in the world. Of course, being Catholic I knew about JPII, but I didn't know much about Reagan, other than his name.

This book opened my eyes to some of the historical situations, increased my knowledge of JPII, and gave me a great admiration for Reagan.

The author was very balanced, and regularly referenced his personal interviews, letters, and testimonies that he had gathered. He brought in a religion of course because it was important to both of his subjects, though it is not a religious book per se.

My only qualm with the writing is an over-attempt to find connections in the lives of these two men. It was cute, but sometimes was a little much.

A very refreshing spiritual and social journey through history. Narration was superb, you feel like you can see the story going through your mind

Such an inspiring and interesting read!! I couldn't stop and didn't want it to end.

This book is a combination spy novel, history book, spiritual book, and uplifting book. It is just terrific. If you’re interested in history, spirituality and entertainment, buy this book!

An excellent read/listen. These two men made the world a better place! We need both of them now.