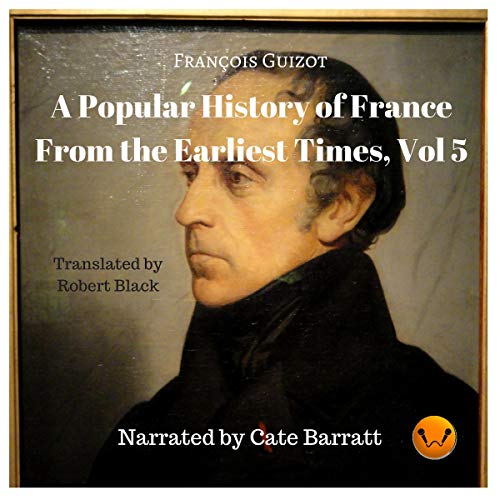 A Popular History of France from the Earliest Times, Volume V, by François Guizot. Translated by Robert Black.

François Pierre Guillaume Guizot (1787-1874) was a French historian, orator, and statesman. He opposed King Charles X’s efforts to usurp legislative power in France and worked strenuously to uphold a constitutional monarchy following the July Revolution of 1830. He served in the government of Louis Philippe, as the minister of education, 1832-1837, ambassador to London, foreign minister 1840-1847, and finally, prime minister of France from September 19, 1847 to February 23, 1848.

Throughout the 1820s and 1830s, Guizot became engrossed in research into his country’s past - research that would ultimately lead to six volumes covering the history of his country. The series A Popular History of France from the Earliest Times is a captivating and well-documented glimpse into the country’s rich past, ably translated from the French by Robert Black and first published in 1898.

Volume V covers France’s history from the rise of Henry IV (Henry of Navarre) in 1589 to the death of Louis XIV in 1715.

What listeners say about A Popular History of France from the Earliest Times: Volume V