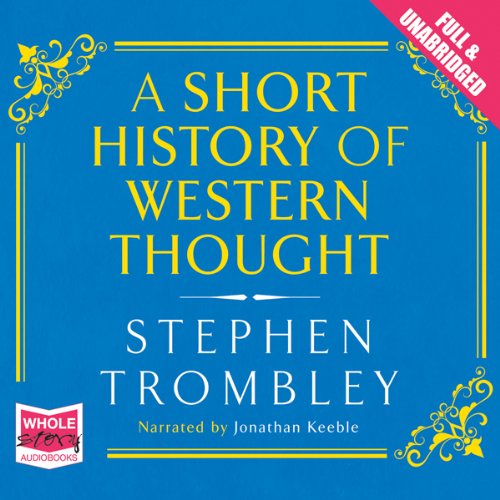 A Short History of Western Thought

A Short History of Western Thought outlines the 2,500-year history of European ideas from the philosophers of classical antiquity to the thinkers of today; no major representative of any significant strand of Western thought escapes Trombley's attention. Included are the Christian Scholastic theologians of the Middle Ages, the German idealists from Kant to Hegel, and the four shapers-in-chief of our modern world: the philosopher, historian, and political theorist Karl Marx; the naturalist Charles Darwin, proposer of the theory of evolution; Sigmund Freud, the father of psychoanalysis; and the theoretical physicist Albert Einstein.

What listeners say about A Short History of Western Thought

For a comprehensive but manageable history of western thought, this was very useful. One to go back to again.

On the plus side (a) the author clearly knows his stuff and (b) so many 'isms' in one place is rather amusing (you can easily be forgiven for thinking you are listening to a Monty Python sketch!)

On the other hand (and forgive the Philistine comment here) I think the summary is that modern European philosophy consists/ed of a lot of upper middle class twits, who have never done a day's work in their lives, lounging around various British and German universities and talking bllx all day long!

I'm really sorry but I went into it with an open mind and I am afraid the philosophy community has not come out of it very well.

If you are looking for a user-friendly, easy read/listen this isn't for you!

An excellent summary of the principle influencers

An easy romp through the history of western philosophy and the various theories without being overly dense. Liked the pace of delivery which was well timed to assist in a university assignment I was writing on the subject