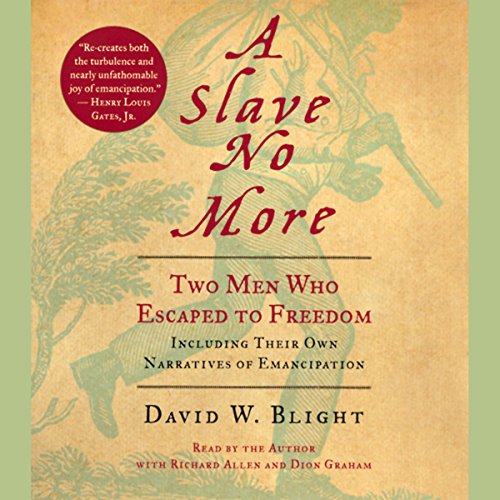 A Slave No More

Slave narratives are extremely rare. Of the 100 or so of these testimonies that survive, a mere handful are first-person accounts by slaves who ran away and freed themselves. Now, two newly uncovered narratives, and the biographies of the men who wrote them, join that exclusive group.

Wallace Turnage was a teenage field-hand on an Alabama plantation, John Washington an urban slave in Virginia. They never met. But both men saw opportunity in the chaos of the Civil War, both escaped North, and both left us remarkable accounts of their flights to freedom. Handed down through family and friends, these narratives tell gripping stories of escape.

Working from an unusual abundance of genealogical material, historian David W. Blight has reconstructed Turnage's and Washington's childhoods as sons of White slaveholders and their climb to Black working-class stability in the North, where they reunited their families. In A Slave No More, the untold stories of two ordinary men take their place at the heart of the American experience.

What listeners say about A Slave No More

If you could sum up A Slave No More in three words, what would they be?

Not only is it historically true but its well written, documented and narrated. Im a big fan of David W Blight - brilliant historian and formidable writer. The audio book is compelling and filled with the ambiance and detail of the time and the characters are portrayed without fanfare as their stories are so incredulous - to add to these fables with any level of embellishment would prove 'over the top'.
I highly recommend this book to anyone interested in history, i have listened to it about 6 times so far and keep going back as its also a reference piece.

With an author narrating there's a degree of commitment to the right areas that marries well to the overall theme and appropriate emphasis where intended. Fabulous listening.