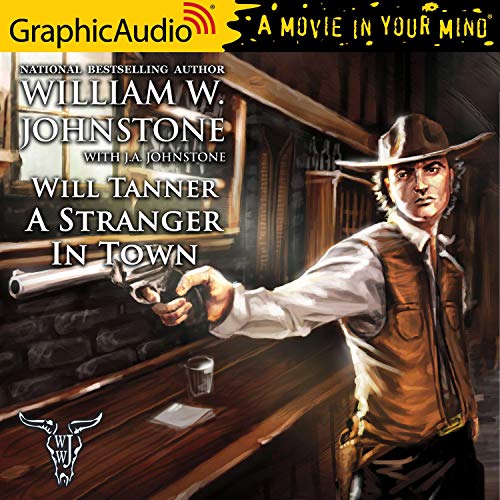 A Stranger In Town [Dramatized Adaptation]

America’s greatest western story tellers begin the explosive new legend of Will Tanner, a US deputy marshal who will risk everything to save a friend, and bring two desperados to justice....

The train grinds to a halt somewhere in the Indian Nations, and the bandits get onboard. They take everything on the train worth stealing and gun down a guard to make their escape — just another notch on the belt for Ben Trout and Zack Larsen, two of the most savage killers in the west. US Deputy Marshal Ed Pine follows them to Muskogee. There the trail runs cold, and Ed Pine disappears. To save his friend, Deputy Will Tanner rides for Muskogee, where justice extends only as far as the range of a Colt .45.

Tanner earned his badge in a blistering gunfight, when he got the drop on a trio of killers and saved the life of another fellow marshal. Now, he’ll have to be just as quick — and just as deadly. To bring in Trout and Larsen, Tanner must set his badge aside, and resort to the law of the gun.

What listeners say about A Stranger In Town [Dramatized Adaptation]