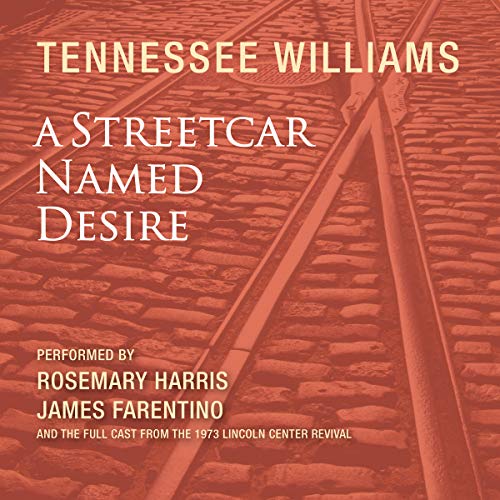 Caedmon is proud to release this archival full-cast recording of Tennessee Williams's A Streetcar Named Desire.

Blanche DuBois arrives at her sister Stella's New Orleans apartment seeking refuge from a troubled past but her ethereal spirit irks Stella's husband, the loutish Stanley Kowalski. Crudely, relentlessly, he unmasks the lies and delusions that sustain Blanche, until her frail hold on reality is shockingly severed.

This atmospheric recording of Tennessee Williams's powerful classic stars Rosemary Harris and James Farentino as Blanche and Stanley roles they performed to acclaim in a smash revival at New York's Lincoln Center.

©1975 The University of the South (P)2008 HarperCollins Publishers

What listeners say about A Streetcar Named Desire (Dramatized)

While I very much enjoy the works of Tennessee Williams, this reading was altogether too melodramatic for my tastes, in terms of the performance choices. If you can see past the acting and listen more to the words, then it's a worthwhile listen.

What disappointed you about A Streetcar Named Desire (Dramatized)?

I absolutely adore Streetcar Named Desire, and I LOVE Tennessee Williams, but I found this dramatization way, way, WAY over the top! I understand that Blanche Dubois is a frail, hysterical woman, but the actress' wailing really just made me cringe. I will be requesting my credit back.
The actor who narrated Stanley Kowalski was very good, however.

Who would you have cast as narrator instead of Rosemary Harris and James Farentino ?

Only the fact that it is a Streetcar Named Desire.

I found myself cringing during most of the audiobook because of the actress' hysterical, wailing.

The actors are ABSOLUTELY FABULOUS!!! And the special effects, ambiance, & background noises had me hooked from start to finish!! I only wish there was a visual transcript because I was trying to follow along in my play script and there were lots of adlibs and improvisation so it was hard to follow along.

What would have made A Streetcar Named Desire (Dramatized) better?

Better quality. You can hardly hear the characters speaking, the background noises drown everything out.

Great performance of an excellent play. A lot of heavy themes including empowerment (or lack thereof) of women, the need for illusions under duress, the consequences of insensitivity and lack of patience on a vulnerable person, and on and on...Highly recommended.

I can barely hear the actors over the background audio. Was hoping this would be good. Big bummer.

“Just the right amount of darkness and chaos”

As per Audible’s request, I, Daniel Valladares, will be composing a critical review on the playwright of “A Streetcar Named Desire”. I begin my writing with a quick note that I took before I even began reading. The title has the effect of being quite literal, yet cryptic at the same time. We acknowledge throughout the story that there is a literal streetcar by which a main character, in Blanche, comes to be in this particular site of New Orleans. However, it has a deeper meaning which we will touch on later on. Let’s lay down the basics by observing the people in the play, many of which can be seen as protagonists or antagonists. For example, Blanche, who seems to be the root of all the others’ problems, can also be pitied and rooted for by the audience. She exhibits a seductive nature, both on paper and on screen. There is also Stella, the sister of Blanche, who hosts her in her home. She can be culpable for the event which transpired against her sister through negligence, but she has also suffered greatly because of the strains her sisters presence has brought about. Stanley, Stella’s husband, is almost seen solely as a villain, but one can attest to him being a man with flaws who is only trying to protect his livelihood. Of the influential and central characters of the plot, the last is Mitch, a friend of Stanley’s that turns into Blanche’s safety blanket of sorts. Through many turmoils they slowly soil all bonds and turn to saving one’s self, even if it means putting the other down. A few of of the most riveting of events to occur were, initially, the unannounced arrival of Blanche and the baggage full of secrets she carried. Stanley’s continued pursuit of unraveling all of the lies Blanche has messily strung together began the rapid downfall of his relationship with his wife. Blanche seduced Mitch after noticing he wouldn’t be difficult to do so with; it seemed to be a plan which would result in Blanche having a financial cushion and reason to stay. The true issue in each scene always came to settle back on Blanche through many a pointed finger, usually by Stanley who had perhaps believed her to be a parasite. The only reason I believe the matter was not resolved earlier and in much more orderly fashion falls on the actions of Stanley. He was blatant in his disapproval of Blanche before everyone and tried to turn ever on against her. He also hit Stella, which prompted Blanche to plead that she leave him, therefore planting the idea in her mind. Of the greatest things held against Stanley is his rape of Blanche and although it was not proven, it is an accusation which is not taken lightly by most characters. In the end, both Blanche and Stanley are equally resented by a majority of the others. The conclusion consists of Blanche being sent to a mental ward as the many lies about her past and the excessive desire she expressed to maintain it proved she was unstable. The overall image which the script painted for me, is one where it portrays all humans as broken in character and proves that most will fall to protecting themselves before they go out of their way to protect others. - Daniel Valladares

Very good story, acting is great but the sound is very bad mixed, beside that very good audiobook

no problem finishing it at all wonderful actors. I love Tennessee Williams A wonderful listen

I’m really grateful please that plays like this have been turned into audiobooks. I’m dyslexic and it really helps me to have some thing to read along with. sometimes I wish that they would bother to read out the full play with stage directions as well as Dramatized versions but all in all this was wonderful and has really helped my learning of the script. I hope more plays are done like this. Fantastic cast! BRILLIANT PLAY!