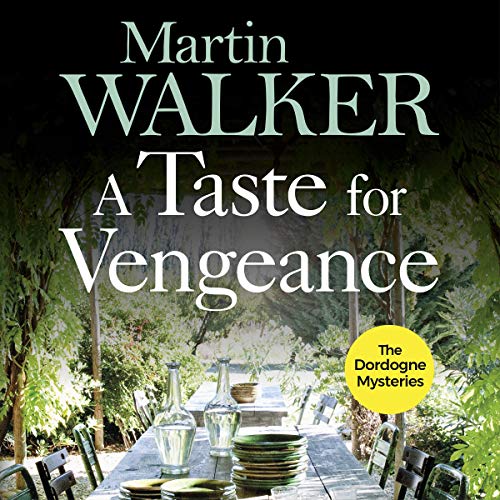 A Taste for Vengeance

In this 11th addition to a beguiling and bestselling series, Bruno wonders which he's most afraid of - a death squad loose in the woods or teaching a cookery class to the tourists who flock to his beloved Dordogne

Bruno, now Chief of Police for the whole Vézère valley, has an unusual challenge to rise to: teaching at his friend Pamela's new cookery school. It is a daunting prospect - the disappearance of one of the school's pupils almost serves as a welcome distraction.

When the woman's body is discovered in one half of a double homicide, the evidence points to something far out of the ordinary. The other murder victim is a man, covered in combat scars and with a false passport. Investigations reveal a list of enemies as long as Bruno's arm. Any one of them would have had good reason to kill him - but which group managed it? And how did they find him?

As more of their mystery man's previous life is revealed, Bruno realizes that there may be more intended victims in the vicinity. Now he must conduct the biggest manhunt in St Denis' history to find the killers before they strike again.

"The Maigret of the Dordogne." (Antony Beevor)

"With Bruno in charge there's always time for one of those classic feasts that make this series such a mouth-watering treat." (New York Times Book Review)

What listeners say about A Taste for Vengeance

Another fantastic book by Martin Walker. Have already pre ordered the next book in the series.

A step into another world

An excellent story featuring many familiar rural characters full of local French colour. Delicious meals that one can almost taste. The tale includes atmospheric incidents with dangerous participants with violent attitudes; murder and security threats, affecting three countries. All this leading up to an exciting conclusion.
Beautifully presented and narrated by Peter Noble an altogether enjoyable experience

The plots and storylines get more complicated with each book, and the characters more finely drawn. Very enjoyable.

I am hooked on the Martin Walker & Bruno!I think this book is very cleverly written & yet another gripping book.

Always entertaining and a lesson in French history and culture. Also in the unique cuisine of the Dordogne. Lovely.

the reader made the enjoyment of this book very boring. failed to finish the book.

I have enjoyed many of the Bruno books, but this one I really didn’t. Very slow, nothing much happening at all and after several chapters I just gave up. What sounded like pages and pages about making foie gras? If I wanted that kind of detail, I’d read a cookery book. I don’t and as I don’t eat meat, I found it all rather unpleasant. I don’t think I will read another of this series. A pity because I used to enjoy them, but the charm has worn thin. Maybe ultimately all the scattered bits come together, but I found I just didn’t care any more.