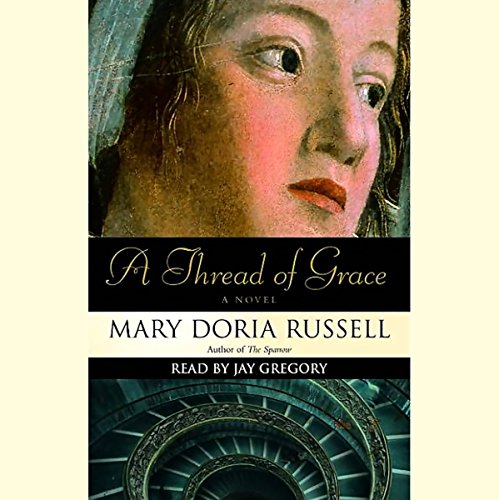 A Thread of Grace

It is September 8, 1943, and 14-year-old Claudette Blum is learning Italian with a suitcase in her hand. She and her father are among the thousands of Jewish refugees scrambling over the Alps toward Italy, where they hope to be safe at last, now that the Italians have broken with Germany and made a separate peace with the Allies. The Blums will soon discover that Italy is anything but peaceful, as overnight it becomes an open battleground among the Nazis, the Allies, resistance fighters, Jews in hiding, and ordinary Italian civilians trying to survive.

Mary Doria Russell sets her first historical novel against this dramatic background, tracing the lives of a handful of fascinating characters. Through them, she tells the little-known but true story of the network of Italian citizens who saved the lives of 43,000 Jews during the war's final phase. The result of five years of meticulous research, A Thread of Grace is an ambitious, engrossing novel of ideas, history, and marvelous characters that will please Russell's many fans and earn her even more.

“An addictive page-turner...[Mary Doria] Russell has an astonishing story to tell - full of action, paced like a rapid-fire thriller, in tense, vivid scenes that move with cinematic verve.” (The Washington Post Book World)

What listeners say about A Thread of Grace

I loved this story about Italy and the characters. It was heart warming and was a wonderful description of Liguria and Piedmont. Despite the sadness there was a really different take on the holocaust that showed that non-jews could make a difference by defiance