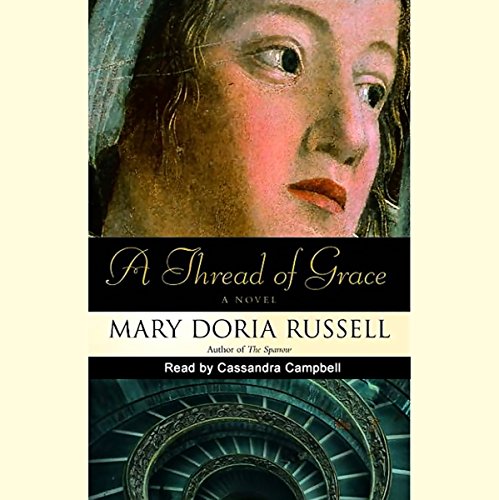 A Thread of Grace

It is September 8, 1943, and 14-year-old Claudette Blum and her father are among the thousands of Jewish refugees scrambling over the Alps toward Italy, where they hope to find safety now that the Italians have broken from Germany and made a separate peace with the Allies. The Blums will soon discover that Italy is anything but peaceful, as it quickly becomes an open battleground for the Nazis, the Allies, Resistance fighters, Jews in hiding, and ordinary Italian civilians trying to survive.

Tracing the lives of a handful of fascinating characters - a charismatic Italian Resistance leader, a priest, an Italian rabbi’s family, a disillusioned German doctor - Mary Doria Russell tells the little-known story of the vast underground effort by Italian citizens who saved the lives of 43,000 Jews during the final phase of World War II. A Thread of Grace puts a human face on history.

Praise for A Thread of Grace

"Rich... Based on the heroism of ordinary people, [A Thread of Grace] packs an emotional punch." (People)

"[A] deeply felt and compellingly written book... The progress of each character’s life is marked or measured by acts of grace.... Russell is a smart, passionate and imaginative writer." (Cleveland Plain Dealer)

"A feat of storytelling...an important book [that] needs to be widely read." (Portland Oregonian)

"Mary Doria Russell’s fans (and aren’t we all?) will rejoice to see her new novel on the shelves. A Thread of Grace is as ambitious, beautiful, tense, and transforming as any of us could have hoped." (Karen Joy Fowler, author of The Jane Austen Book Club)

"A story of love and war, A Thread of Grace speaks to the resilience and beauty of the human spirit in the midst of unimaginable horror. It is, unquestionably, a literary triumph." (David Morrell, author of The Brotherhood of the Rose and First Blood)

“A powerfully imagined novel . . . [a] profoundly moving book that engages the heights and depths of human experience.” (Los Angeles Times)

“An addictive page-turner . . . [Mary Doria] Russell has an astonishing story to tell - full of action, paced like a rapid-fire thriller, in tense, vivid scenes that move with cinematic verve.” (The Washington Post Book World)

What listeners say about A Thread of Grace

I had not read or listened to any of this novelist's work before I downloaded this novel, which I chose because I enjoy the narration of Cassandra Campbell. Of course, I was not disappointed by the narration: nor by the novel. The plot line you can read elsewhere, but it taught me much I did not know about the German-Italian Axis of WWII, as well as the geography of Northern Italy and Judaism!

Novels which inform as well as tell a story are always welcome. This is also a deeply-moving novel about the separation and mistreatment of Jewish families, of the bravery and courage of Italians who chose to shelter them and those who betrayed them, of the Italian partisan resistance, and of all the best and worst qualities war can bring out in humans. Although I thought I knew quite a bit about the Final Solution devised by Hitler for Europe's Jews, and anyone else the Nazis thought unworthy of living, this novel showed there was much I still did not know about its horrors, and it is at times a very harrowing, even distressing, novel. The author, rightly, does not spare the listener the horrors of war and there is often no happy ending for some of the characters the listener comes to like and admire. The meaning of the title is not revealed until near the end, and gives a glimmer of reason for optimism. I would highly recommend this novel to anyone who is interested in learning more about the levels to which human qualities like compassion, kindness, bravery and selflessness can reach and, conversely, the human capacity for intolerance, ignorance, cruelty and selfishness. It certainly made me want to explore more of this author's work.

I'm not quite finished it yet but so glad I bought this, multilayered, cultural, historical, romantic it's got the lot. As with all really good books I'm desperate to know what happens next but will be sad when it's over!

If you could sum up A Thread of Grace in three words, what would they be?

Renzo - he is engaging, charming, full of faults, he shocks, he will do something heroic and then afterwards sits sozzled and cursing, tragic, comic, surprising and always entertaining.

Have you listened to any of Cassandra Campbell’s other performances? How does this one compare?

Not heard her before. I thoroughly enjoyed her interpretation for different characters, and her changes of pace and mood. She brought recognisable individuality to the main characters and her performance was a huge contribution to the success of the novel. I loved her accents (I don't know if the Italian pronounciation was accurate or not, but it really made the novel sing for me. Her German accents were perhaps a little bit overdone, but perhaps this all contributed to the mood and the Italian view of the German occupiers, and who cares about such tiny details in the context of the whole. Her accents were part of the story and really helped with who was who and who did what, constantly rearranging the atmosphere, and marking time and place and mood. You may notice an American pronounciation here and there that slightly interferes with your absorbed concentration if you are English, but that is only a tiny factor. I loved her performance, it was a huge and intrinsic part of my enjoyment.

There are many small scenes, little cameos, funny moments, moments of shock, and, what happened to some of the main characters at the end.

Please refer to the other reviews for the story.. I'll just say - you are invited to partake in a tender romance with the Italians - go for it, it's great. Be warned, there are so many characters and so many intricate details, that it is very difficult to follow initially. I found I had to re-listen many times to various parts, to sort out who was who, where they were and what was happening, but it was very well worth it.. Each time I engaged with each character more. You could be hypercritical, and say that some of the female characters are perhaps painted to be a little too perfect, but that is part of the romance, and to get the best out of it, you have to go with the flow. Your enjoyment will probably depend on how you listen to the story - if you are listening whilst busy on other things or falling asleep to it at the end of the day, you will have to replay some details to follow it, but if you are driving, it will fill many happy hours for you.. Once I had finished it, I immediately re-listened to the whole several more times and each time picked up on more atmosphere, more comic details, more little tragedies, more details painting each setting, and I am still re-listening to it and still enjoying it, it is unputdownable.

Another superb book by Victoria Hislop in which one not only becomes deeply involved with the characters but learns so much history. I love her books but my favourite is The Island.

The story started well and was very instructive about tragic events. It also ended well. However during the middle sections it did seem to lose its way for a while. Some of the language although fitting for some characters seemed excessive when listening as an audio book.

Haunting, shocking, stays with you.

The story of Jews and Italian partisan fighters in rural Italy during WW2, this was always going to be gritty, but I was amazed at how deeply moved I was, by the story and by the characters, their astonishing bravery and unselfishness, and their ability to remain human in a world that had lost its grip on 'humanity'. Wonderful, insightful and deeply moving - beautiful. The narrator struggles to differentiate between different accents and it's not always easy to tell which character is speaking, but as some characters were pretending to have different nationalities she can perhaps be forgiven for this.
Thoroughly recommend this book although you may find it harrowing at times.

Would you consider the audio edition of A Thread of Grace to be better than the print version?

What other book might you compare A Thread of Grace to, and why?

This does not compare to other books as every book tells a different story.

Have you listened to any of Cassandra Campbell’s other performances? How does this one compare?

I thought this narrator was outstanding, her italian accents were perfect. her ,voice was gentle but meaninful.

Sadly I am not a film producer, but I could see this being a film or TV dramatisation.

Without giving the plot away, it was a very moving story of what it was like to be a Jew in Italy during world war two. Woven through the book was a german doctors story, which pulled the book together beautifully. .

Would you consider the audio edition of A Thread of Grace to be better than the print version?

I never consider an audio or a movie version to be better or worse than the print version... they are different in all respects... this was a beautiful book to begin with, Russell is an amazing author - but the narration of this book was possible the BEST narration I have ever heard on any audio book!

Renzo, Angelo, Mirella, Suor Dimples.. it is very difficult to pick out any favorite character.

There are many characters in this book, from many different nations. Campbell managed to give each character it's own voice, while keep accents / nationalities clear throughout. Furthermore, her narrative tone reflected the attitudes and situations of the character and situations she was speaking of (rather than going flat... ). Her voice is lovely.. deep, rich, melodic - and she has not only perfect and masterful control of her acting performance, but of her vocal range and breath throughout.