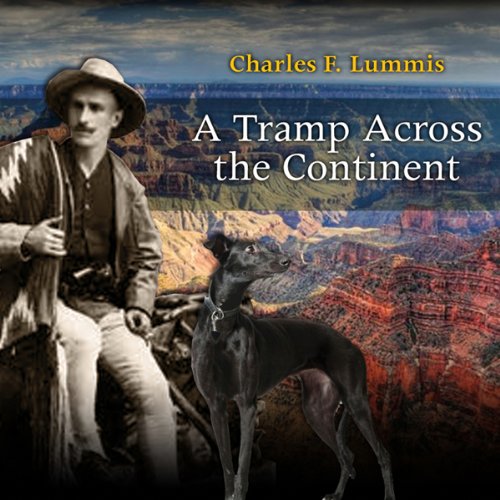 A Tramp Across the Continent

In 1884, with a job offer to become City Editor of the Los Angeles Times, Charles Fletcher Lummis determined to walk to his new job from Ohio, covering over 3,500 miles through 8 states and territories. He witnessed and documented the end of the old American West and the beginning of the modern age, which picked new winners and losers. Adventurous author, passionate Indian rights activist, pioneering reporter, workaholic newspaper editor, librarian, poet, anthropologist and archeologist, Charles Fletcher Lummis was a great colorful individualist, who explored and popularized the facts and legends of the American Southwest.

In this first person narrative, never before recorded as an audio book, Lummis describes the invasion of the West by investors, forcing out small miners and ranchers. He sees the last of the buffalo, is nearly murdered by prisoners, visits the Southwest Indian pueblos before there were highways, befriends a dog who goes mad, performs self surgery while alone in the wild, is nearly frozen in a blizzard and meets the great colorful characters of the American West.

What listeners say about A Tramp Across the Continent

What a Trek. What a Tramp.

I would recommend this audiobooks to friends who live in the Southwest. Lummis' descriptions riveted me because I have driven through or flown over this region without knowing its history. Lummis' trek across the continent is an adventure unlike anything I have read before.

My favorite character was Lummis himself. He wrote during his journey. He took chances which many of us would not have taken. He was in the right place at the right time to see people, places, and customs before they changed in the twentieth century. He was a great promoter of the Southwest and the Native Americans who lived there. Although he passed away nearly a century ago, I feel like I am sitting by his fire as he tells be his tales.

Who would not be enchanted

What an interesting book. Almost incredible but worthy of recognition as a true story. Charles Fletcher Lummis wrote in the same vein as Mark Twain and John Steinbeck and I would rate him as equal master. Completely capable physically of overcoming any obstacle that confronts him on his "tramp" from Missouri to California, I was entranced at his descriptions of the landscapes, people and his day to day living. The narration is difficult to follow in places for a non-American and I'm sure many might find it impossible. But worth the effort of re-running the difficult to follow places. Lovely book. Mentioned in The Library Book by Susan Orlean which in itself is a masterpiece.