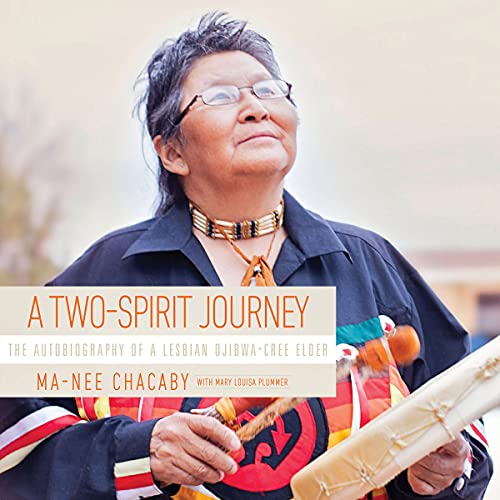 A Two-Spirit Journey is Ma-Nee Chacaby’s extraordinary account of her life as an Ojibwa-Cree lesbian. From her early, often harrowing memories of life and abuse in a remote Ojibwa community riven by poverty and alcoholism, Chacaby’s story is one of enduring and ultimately overcoming the social, economic, and health legacies of colonialism.

As a child, Chacaby learned spiritual and cultural traditions from her Cree grandmother and trapping, hunting, and bush survival skills from her Ojibwa stepfather. She also suffered physical and sexual abuse by different adults, and in her teen years became alcoholic herself. At 20, Chacaby moved to Thunder Bay with her children to escape an abusive marriage. Abuse, compounded by racism, continued, but Chacaby found supports to help herself and others. Over the following decades, she achieved sobriety; trained and worked as an alcoholism counsellor; raised her children and fostered many others; learned to live with visual impairment; and came out as a lesbian. In 2013, Chacaby led the first gay pride parade in Thunder Bay.

Ma-Nee Chacaby has emerged from hardship grounded in faith, compassion, humour, and resilience. Her memoir provides unprecedented insights into the challenges still faced by many Indigenous people.

“From groundbreaking and controversial AIDS awareness programs in the 1990s to the work she continues to do today, both with her own family and her extended reserve family, her life and this memoir ultimately serve as handbook of hope." (Lara Rae, Winnipeg Free Press)

“A Two-Spirit Journey is a raw and emotional story that doesn’t just show readers the author’s scars. Chacaby bares all in an honest telling of her life that includes flaws, like her struggles with substance abuse and a sometimes rocky path to sobriety. Despite the turmoil, the autobiography does have its uplifting moments and characters. Heartwarming stories of childhood friendships, and most importantly a powerful relationship between the author and her grandmother, weave feelings of optimism and hope into a life that is oftentimes surrounded by darkness.” (Scott Paradis, tbnewswatch.com)

“An excellent memoir that gives readers, whether Indigenous or not, a direct connection to the past and to a personal story about gender, sexuality, overcoming adversity, and becoming a leader, an activist, a healer, and an inspiration to two-spirit individuals everywhere.” (Robert Bittner, Simon Fraser University, The Canadian Journal of Native Studies)

What listeners say about A Two-Spirit Journey

this was a roller coaster of a story. I found myself crying almost as though I was there during the sad times in this woman's life, and then later elated with her when she overcame a new obstacle put before her. This woman is a saint and deserves a medal for taking the hard life she was given and making of it an opportunity to help so many people!