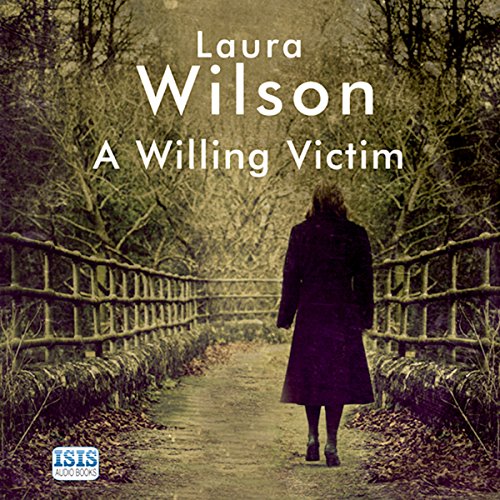 London, November, 1956. DI Ted Stratton is investigating the murder of Jeremy Lloyd, a young man with a taste for esoteric religion. Stratton's enquiries lead him to Suffolk, where the mysterious Mr Roth has founded a Foundation for Spiritual Understanding. Apparently Lloyd had believed himself marked out for great things. But at the Foundation, Stratton meets 12-year-old Michael, who is proclaimed as the next incarnation in a long line of spiritual leaders.

He is rumoured amongst Roth's disciples to have been immaculately conceived, but the woman who is said to be his mother, and whose photograph was cherished by Lloyd, has disappeared. When a woman's body is found, Stratton assumes he has found “the mother”, but the reality turns out to be far stranger.

I love crime/suspense novels and this story is up there in my most enjoyable listens. Set back in 1950's you are subtly aware of the differences to modern day. The story unravels and the police are sent round and round attempt to gather evidence to support their theories. Fully of self absorbed characters living in self-created hierarchies with devoted followers. Appropriate for post war Suez Canal crisis / fears. Well written, excellently narrated. Didn't want to stop listening.

kept me enthralled throughout

Laura Wilson is an author new to me, whose storytelling held my attention throughout with clever turns of plot and excellent characterisations. The reader, Sean Barrett caught the exact phrasing and interpretation of each of the complex characters.

The story covers a period of about a decade in post WWII England, when society was struggling to find meaning and discovering a new wave of something spiritual to believe in. Essentially a murder mystery, with a careworn but likeable detective, it includes elements of a psychological thriller, crime investigation and social comment. It is an intelligent story requiring some concentration to hold all the threads leading to its conclusion which does not disappoint.

I look forward to discovering more by this writer and to listening again to Sean Barrett's readings.

Excellently narrated and a good story

Where does A Willing Victim rank among all the audiobooks you’ve listened to so far?

I enjoyed this book, it is long and does occasionally feel a little slow, but there is always enough being held back to make you want to keep listening to find out what is going on. The narrator is excellent and ultimately is the reason why I'll buy the next book, I thoroughly enjoyed his performance, and I enjoyed the story too - it's not as fast paced as my normal choices, but I liked the characters and I found the story believable and not full of a load of rubbish that was hard to follow or totally unbelievable etc. Overall I would definitely recommend it, and I am very picky with audiobooks because I can't stand very heavy accents - it was nice to have it read in a non-offensive English accent rather than American like so many audiobooks are (no offence!).

The weakest book in the series

Did Seán Barrett do a good job differentiating each of the characters? How?

He is a good narrator, he just had bad material

I have listened to the rest of the series but this felt like a poor sequel tacked on at the end. Storyline was poor and it just didn't make for an interesting read.

A satisfying and interesting book

This tale in the excellent series by Laura Wilson has received some lukewarm reviews. I have come to like this writer very much and her detective Stratton, who is unusual in this genre as a kindly family man of upright character. Laura Wilson writes very well with psychological insight and a feeling for the lives of ordinary people. This tale is unusual and well constructed. She reflects on the delusions and flight from
reality of individuals who follow esoteric teachings. ( I think she is thinking of gurus like Gurdjieff) There are moments of very sensitive observation and compassion in her writing and also common sense and humour . Her evocation of the 1950s is completely convincing -vividly imagined in every particular.
This book is not especially violent or suspenseful but has many other qualities. Warmly recommended ,not least because it is masterfully
read by Sean Barrett.

Weakest in the series

I've enjoyed all the authors other books in this series and the narration by Sean Barrett except this one. I found it's slow, ponderous and boring. Hope the next ones better.

I tried to like this book. I really did. I love Stratton, and the previous books have been highly engaging, with some humour and good characters. But I couldn't get into this, I've tried more than once. Why did Sean Barrett reiterate time after time 'Mary stroke Ananda'? It drove me crazy. It just was totally superfluous and unnecessary. I mean, you wouldn't read it in the book like that - so why say it? Aaargh! I give up. Didn't like it. Ballard got on my nerves, Stratton and he had a good comradeship in previous book, but this time he had to get home to his wretched wife and 'read the nipper a story.' Very disappointing after the first three books. I'm afraid they are the best, the last two just aren't up to standard. A great pity.