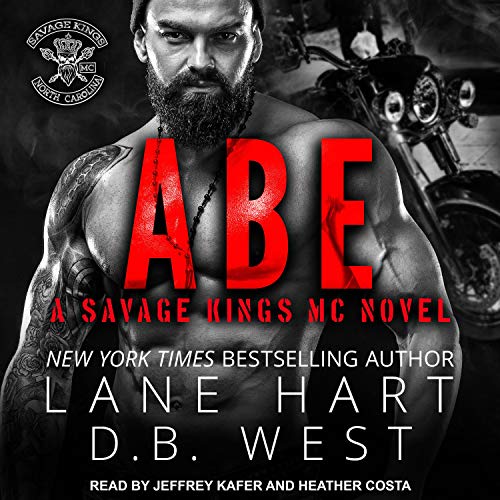 Abram Cross didn't want the life of crime that fate had dealt him, but what other choice did he have when his mother spent every penny on drugs instead of buying food for him and his younger brother?

While Abe is no longer a professional thief, he's still living on the wrong side of the law as a member of the Savage Kings MC. He never claimed to be a good guy; but after Abe meets Mercy Daniels, he's starting to wish he was a better man.

Abe was only supposed to take Mercy for a ride on the back of his bike. He didn't plan on offering her more than a few good times between the sheets.

When Mercy starts getting creepy letters from a psycho, one who has also been breaking into her house, Abe refuses to just walk away. He won't let her down the way he let down his brother when he needed him most.

Abe knows he's the perfect man to provide Mercy with protection. But who will protect Abe's heart when he starts to fall for the woman he knows he could never deserve?

What listeners say about Abe

I like this series but Abe's book is my favorite so far. I think it's because he has such a dirty mouth on him and it makes sexy time so much more interesting especially with the male narrator who does sound so hot during those times. Law have Mercy!!😊 The story is very interesting because Mercy has a stalker and Abe is protecting her. I didnt know who the stalker was until it was revealed. The story also continues from Chase's book and lots more should be revealed in Torins book. I've been looking forward to listening to his. Female narrator was good for her part but her voice doesnt change much when she's reading the male role. It's hard to get into it when a big bad alpha biker sounds like a girl. That's my only complaint. Still worth the credit or money to listen to.

I'm so excited that this series is coming to out on audio! One of my favorite authors and the narrators just nailed it - so good!

An okay MC romance, in a simplified way

This book was okay. It seemed the relationship between Abe and Mercy was all physical and with this so called "hardened" MC/criminal lamenting he wasn't good enough for Mercy. The sex was there throughout the book, however the relationship development between the H/h was absent IMO. It was an okay listen if you are in the mood for an MC romance and don't have a long awaited listen awaiting.

Loved it!!!! I'm in love with Abe myself!! Can't wait to hear more about them in upcoming stories.

Such a sweet Read

Such sweetness. Both main characters are lovable 💖 but you've really gotta love Abe. His heart, while reasonably extremely guarded, has been so big all his life.