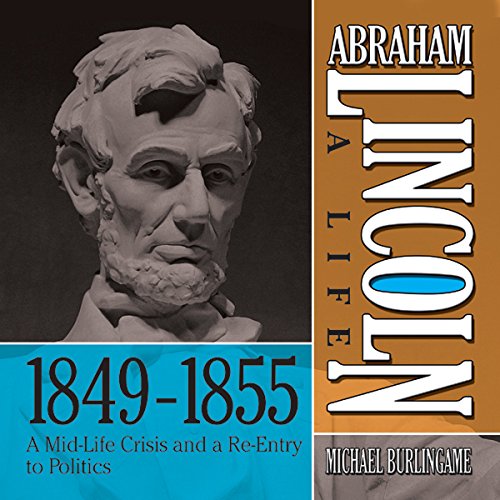 A Mid-Life Crisis and a Re-Entry to Politics (1849-1855)
"I was losing interest in politics and went to the practice of law with greater earnestness than ever before" - Mid-life Crises (1849-1854)
This point in Lincoln's life is marked by a sudden return to the practice of law. Highly moral and judicious, he often took little or no money for cases, and would not represent a client if he didn't believe in his case. Lincoln tried to settle many cases out of court. He developed a persona of being affable and open, especially to juries, giving him a noted advantage. He also served on the circuit courts, where lawyers had to prepare cases quickly and where lodging was often quite difficult to find. This period is marked by the passing of both Lincoln's son Eddie and his father, and it notes Lincoln's acceptance of Christianity.

"Aroused as he had never been before" - Reentering Politics (1854-1855)
The encroachment of slavery to other states caused Lincoln to put a hold on his law career and take up the cause of abolition. He was derogatorily attacked by opposing politicians who are against his ideals. Lincoln was approached by the anti-foreign, anti-Catholic Know Nothing party asking for his representation in the legislature, which he refused. In many speeches, Lincoln begins to attack the morality of Southern slave-holders and the hypocrisy of slavery existing in the U.S. He is also narrowly defeated in his bid for senate.

"Lincoln scholars have waited anxiously for this book for decades. Its triumphant publication proves it was well worth the wait. Few scholars have written with greater insight about the psychology of Lincoln. No one in recent history has uncovered more fresh sources than Michael Burlingame. This profound and masterful portrait will be read and studied for years to come." (Doris Kearns Goodwin)
"The most meticulously researched Lincoln biography ever written. Burlingame's Lincoln comes alive as the author unfolds vast amounts of new research while breathing new life into familiar stories. It is the essential title for the bicentennial." (Publishers Weekly)