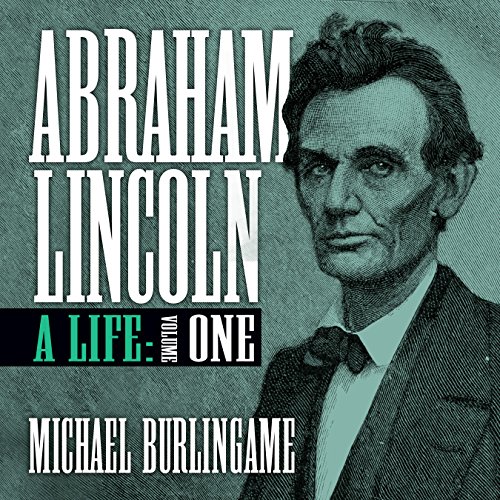 Abraham Lincoln: A Life, Volume One

In the first multivolume biography of Abraham Lincoln to be published in decades, Lincoln scholar Michael Burlingame offers a fresh look at the life of one of America's greatest presidents. Incorporating the field notes of earlier biographers along with decades of research in multiple manuscript archives and long-neglected newspapers, this remarkable work will both alter and reinforce our current understanding of America's 16th president.

Volume 1 covers Lincoln's early childhood, his experiences as a farm boy in Indiana and Illinois, his legal training, and the political ambition that led to a term in Congress in the 1840s. In Volume 2, Burlingame examines Lincoln's life during his presidency and the Civil War, narrating in fascinating detail the crisis over Fort Sumter and Lincoln's own battles with relentless office seekers, hostile newspaper editors, and incompetent field commanders. Burlingame also offers new interpretations of Lincoln's private life, discussing his marriage to Mary Todd and the untimely deaths of two sons to disease. But through it all - his difficult childhood, his contentious political career, a fratricidal war, and tragic personal losses - Lincoln preserved a keen sense of humor and acquired a psychological maturity that proved to be the North's most valuable asset in winning the Civil War.

This landmark audiobook establishes Burlingame as the most assiduous Lincoln biographer of recent memory and brings Lincoln alive as never before.

If you could sum up Abraham Lincoln: A Life, Volume One in three words, what would they be?

Michael Burlingame's scholarship on Lincoln is soundly researched. He meticulously supports any speculation or interpretation, and the book includes hundreds (if not thousands) of notes. Some scholars disagree with some of his assertions regarding Mary Todd Lincoln- yes, she there is plenty of evidence to support speculation that she suffered from a mental disorder- but he significantly downplays her contributions to Lincoln's political career. Burlingame presents a strong analysis of Lincoln's evolution as an emancipator but readers who are not familiar with the workings of Congress can easily find themselves lost in the details of his daily political life as a US Congressman. Overall, however, this is a great book, but it is a monster of an audio download which should have been divided into smaller segments. I had to clear a large amount of space from my device in order to download the file.

Would you be willing to try another book from Michael Burlingame? Why or why not?

Yes, I am also reading Vol. 2 of the same work.

This audio book should be reconfigured to download in small segments. The single file download is way too big.

I would recommend this book to a person interested in Lincoln, it does include considerable amount of historical information about the early life of Abraham Lincoln not included in Sanburg's volumes. Having said that, I would also warn that, in the book, following presentation of a group of facts/events/quotes, the author does have this tendency to follow-up with psycho-analysis........as if he had recently had the great president on the couch. I cannot be certain if this annoying aspect of the book seems as pervasive if one reads the print edition; but narration by Mr. Pratt gives it a force I find difficult to ignore. My favorite example is the presentation of the death of Abe's biological mother as the root cause of Abe's distrust of, and difficulty with, women. You see, his mother died on him, so women could not be trusted. This fact, then followed-up with an account of how Abe felt deep resentment for Grigsbys, as he blamed them for the early death of his sister, Sarah........Should not Abe have seen Sarah's departure as just another example of the unreliable nature of women? It is as if the Author is not satisfied with the fact that the entire volume is his creation, he has to insert himself into the volume. I wish he had not done it. The quality of historical facts, events, and quotes speak well for themselves. The book does seem well researched, and does include considerable information from Abe's early years. However, I found the author's tendency to pluck the subject from an environment that could be considered typical for many from his, Abe's, time and offer a conclusion as to future psychological development, made this seem like more of a psychology thesis than unbiased text about a past president . The inflection and tone of the narrators voice add to this impression.

the volume of information presented.

Would you be willing to try another one of Sean Pratt’s performances?

Honestly, if I were looking at several audio-books covering the same person/event of history, and I saw Mr. Pratt's name as the narrator for one of them, it would influence me to pick another. Technically, Mr. Pratt is good. It is easy to follow his narration. My judgement is based entirely on personal feeling concerning quality of voice and style of presentation. If you have listened to Carl Sandburg's Abraham Lincoln: The Prairie Years and The War Years, and liked the Arthur Morey narration, you will find this vastly, maybe distractingly, different.

Do you think Abraham Lincoln: A Life, Volume One needs a follow-up book? Why or why not?

There is a follow-up book. I may purchase it, but do not feel a strong compulsion to do so.

The most comprehensive Lincoln biography ever

This is a review for volumes 1 and 2. This book is not for the casual listener. It is very long and sometimes repetitive (because Burlingame cites never before used sources that often say the same thing), but extremely thorough. No other book will give you as much knowledge about Lincoln and his life.

Exceptional volume of research and detail

I am impressed with the extraordinary amount of research and detail that fed into this Lincoln biography. The performer’s use of different voices for different characters made the book more understandable. I also appreciate the greater honesty in describing aspects of Lincoln’s personality and behavior that may be less consistent with more heroic Lincoln myths. This is the best of the ten or so major Lincoln biographies I have read.

A truly scholarly work. Well organized and presented, it is an enjoyable book to listen to.

If Abraham Lincoln interests you, here is an audiobook to take you fairly deep. Long, but inclusive...

lot of info but little dry

while the book packed in a lot of info, facts and background on olde abe it was kinda dry listen. if your a history major u will like the book but I would recommend a shorter book myself

This is a wonderfully detailed biography. Burlingame Has put together a masterpiece. looking forward to 2nd volume! Thinking of the subject if I may, it is unusual isn't it that one life should affect society in such an identifiable way. It's not that a society turned left or right, it's as though its trajectory moved more skyward , somehow , able now to lift, with an unseen weight left behind.
R Piepenbrink

This was an extremely engaging audio book. There were no moments of long drawn out information spewing. A very lively story. Very excited to move on to the next volume. The only reason I didn't give it 5 stars is Mr. Pratt mispronounced a handful of words multiple times. Not that I think I could do any better. It was just really distracting.

The book is full of excessive detail that gets in the way of telling a good story about a great man. Reminded me of times I've been trapped next to someone at a dinner party who felt compelled to give me every precise fact about whatever they were describing.
The reader is one of my least favorite - too dramatic. His souther accent is almost like fingernails on a blackboard - maybe not THAT bad.
I was hoping Vol 2 would be better, but it was similar.
Wonderful topic . . . not presented in a manner I enjoyed. The Carl Sandburg book is better. Shelby Foote's work about the Civil War is better still.