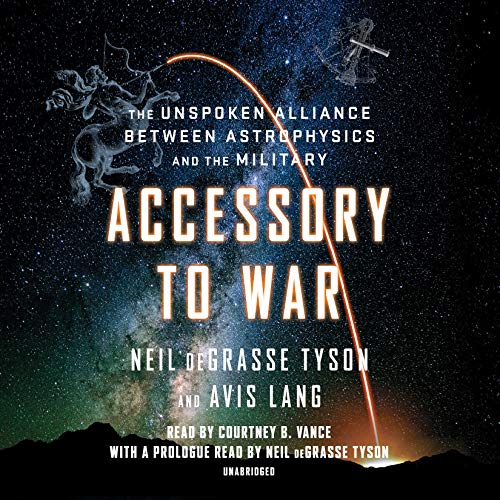 An exploration of the age-old complicity between skywatchers and warfighters, from the best-selling author of Astrophysics for People in a Hurry.

In this fascinating foray into the centuries-old relationship between science and military power, acclaimed astrophysicist Neil deGrasse Tyson and writer-researcher Avis Lang examine how the methods and tools of astrophysics have been enlisted in the service of war. "The overlap is strong, and the knowledge flows in both directions", say the authors, because astrophysicists and military planners care about many of the same things: multi-spectral detection, ranging, tracking, imaging, high ground, nuclear fusion, and access to space. Tyson and Lang call it a "curiously complicit" alliance.

"The universe is both the ultimate frontier and the highest of high grounds", they write. "Shared by both space scientists and space warriors, it's a laboratory for one and a battlefield for the other. The explorer wants to understand it; the soldier wants to dominate it. But without the right technology - which is more or less the same technology for both parties - nobody can get to it, operate in it, scrutinize it, dominate it, or use it to their advantage and someone else's disadvantage."

Spanning early celestial navigation to satellite-enabled warfare, Accessory to War is a richly researched and provocative examination of the intersection of science, technology, industry, and power that will introduce Tyson's millions of fans to yet another dimension of how the universe has shaped our lives and our world.

"DeGrasse Tyson reads the introduction, and he does a terrific job. He has a silky, deep voice, and he paces himself well. He could credibly read the entire work himself, but instead he hands off the audiobook to Courtney B. Vance, whose voice is just as deep but more formal, even regal. Vance does a magnificent job continuing the story with a tone that supports Tyson and Lang's words. The result is an audiobook that speaks to all of us, even those who know little about astrophysics." (AudioFile)

"Extraordinary.... A feast of history, an expert tour through thousands of years of war and conquest.... Condenses multiple bodies of work into one important, comprehensive and coherent story of the symbiotic developments of astrophysics and war.... The lesson is not merely a wake-up call for astrophysicists, but for all of us, for anyone with the misapprehension that science somehow marches on separate from the rest of culture." (Jennifer Carson, New York Times Book Review)

"Fascinating.... Retells the history of space exploration, and of the Cold War, excelling in bringing forth the entangled advances of science and military interests.... The book’s message rings like a wake-up call. (Marcelo Gleiser, NPR)

What listeners say about Accessory to War

A marathon in the form of a book

It's a story about humanity and it's obsession with war.
Only a true lover of Astronomy and a fan of Neil Degrees Tyson can complete this book.
Thought exhausting, it was narrated well, with facts and numbers. That's what makes the book worth reading.

Although I love Neil and want to give a higher rating, such books that contain so many numbers and facts one after the other are hard to follow by listening. Better to grab a physical copy and immerse yourself.

Some reviewers claim this book's story is drawn out, perhaps too detailed. To a reader who just wants to experience a conventional Dr. Tyson book about rapid mind blowing space stuff, this book could leave you uninterested at times. However, as a reader who previously and desperately craved to learn about that connection between astronomy and the military, I could not have been more excited to read AND listen to this book. The stories about pivotal moments in history and the hidden heroes who were looking up deep into the sky really furthers my inspiration for serving my country in a way that, until this book, I was quite unsure was possible. I knew the military would be a good way to further one's career in space, but now I'm enlightened in that the military doesn't just empower a career in space, but deeply relies on those individuals for innovations to establish supremacy in the new frontiers of science. Thank you Dr. Tyson!

Dry, Too much of too much

This is NOT read by Tyson! Very misleading

This claims to be read by Tyson and one other person and the sound sample is by Tyson. However Tyson ONLY reads a short few minute intro, despite he's featured in the audio sample. This is incredibly misleading!

This books is hard to stomach. Poorly researched, repetitive, and only lossy relevant to the title and description I recommend readers take a pass. The book is a political one and not one about the merger of science and military technology over time. In the first hour you will hear over and over again things such as how evil president bush and his administration were, how the us military commits atrocities....hear praise of saddam huessein’s rule, etc. I fully acknowledge I may have misunderstood I was buying a political opinion book....but nevertheless buyer beware.

Could be a book of lists

Almost unreadable… And I LOVE Neil deGrasse Tyson. This is so out of his normal storytelling voice. Painful to get through.

very opinionated. it had strings of amazing facts about war and astrophysics, then political rants based off his beliefs. really annoying and disappointing.

Lang's voice is similar enough to Neil's you'll forget the he's the one reading even. Fantastic look at the development of astrophysics and its use by the militaries throughout history. I learned a lot. Often Tyson's books are rehashes of Cosmos with a slightly different spin each time imo. This book is original and thoughtful.

Reality is not linear

Excellent commentary on the nonlinear and morally gray aspects of Human progress, and the necessity of such.

Faster read than I thought it would be.

I went into this book expecting it to take me about a month between reading and listening to the audible version while driving.

It was a fast read and the at 1.25x speed the audio version was perfect.

The material is light like NDT’s last book, you dont need to be a physics buff to enjoy it. This book is just longer form.

Far too much politics for a science book

I hate to do this because I am a big fan of NdGT. He is both brilliant and charismatic and his other books have been far better. Unfortunately this provides disappointingly little science and by the end becomes a long drawn-out political rant on nuclear arms. "You can strap a peaceful satellite or a nuclear warhead to a rocket, now let's talk about politics for 17 hours".

struggled to finish. had to increase reading speed to avoid boredom. very long chapters which made it difficult to follow

The book is full of interesting topics and moral questions surrounding not just Astrophysics but science in general. It was well researched and generally well written, but the subject matter was intense. I recommend reading in small chunks!

As much as I love and respect Mr Tyson, this book was not for me. I listened many books including Neil Degrasse Tyson on Audible, and I enjoyed them all. But when I try to listen to this book, I keep catching myself wondering away. I think the language of this book is way too academic (try hard) and therefore I conclude that it wasn't written to average people like me, but to a few that like to masturbate over the most difficult parts of the English vocabulary. Maybe by talking difficult the writers try to overcompensate for a boring content.

I liked it for a one time run through

it's a seriously great book

10 outta mudda pucking 10, have a listen and enjoy its one of the best audio books I've heard.

Intriguing look at linka between science and war

I found this book quite interesting though at times I did slip off on tangents. If you're looking for highly specific data this probably isn't the book for you, but more of a broad brush overview of how science and physics concepts have been applied to, or derived from our unsavoury taste for war.

Sadly Not a great book

No real point to this book.

It's a long winded review of some history and events. I didn't finish the book as i could not see any real point to it. The scientific military connection is self evident unless you are a child, i like NDTs other work a lot but couldn't swallow this one.

The author should read his own book considering his speaking talent. It ignites a greater connection with the audience.

Good but the last one was better

It was good and interesting, but I definitely preferred Niels first book a lot more.

a great book but felt stretched at times

this was a great book as usual from Neil deGrasse Tyson, a great story line outlining all the details of the space race and relation between military and space. but at times it felt like the story has been stretched for too long and the details which are not necessary are repeated again and again.