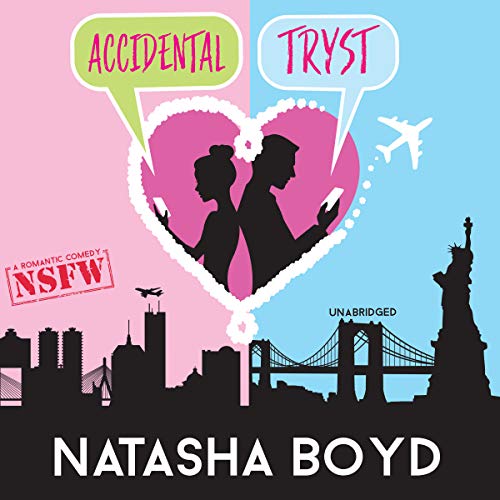 Two strangers accidentally switch cell phones in a busy airport in this edgier You've Got Mail, a sexy romance for the smart-phone era....

What a disaster! I only just made my flight to New York to help my uncle, and the phone I'm holding is not mine! It seems to belong to some commitment-phobic serial dater who's never made it past four dates (according to the constant notifications he's getting from his fake dating profile).... And worse? I have a sinking feeling it's that hot suit-monkey with the arctic grey eyes I just had a run-in with at the airport. Somehow, I have to persuade him not to get a new phone until I get back. My whole life is on that phone. I knew I should have backed it up. It's only a few days. Surely, we can handle it.

This is a joke, right? My life could not get more f--ked up. I'm in the middle of selling my company and on my way to a funeral and that hot mess hippie-chick stole my freaking phone. I'm not sure how she convinced me not to immediately walk into a smartphone store and get a new one, but now she's going to have to play stand-in and distract me while I deal with my long-avoided and estranged family. I don't have my dating apps after all, and frankly she's pretty funny. And sexy. And why can't I stop texting her? And now we're talking. And...look, I'll admit that I usually run for the hills the morning after, but the morning after phone sex? That's not really real, right?

What listeners say about Accidental Tryst

like every other romantic plot story, this too had a meet-up, build up, personal issues, steamy scenes, betrayal, anger, rich, poor etc. Read if you want to relax with something light and simple. And they could have made the last 1 hour go away.

a good listen with struggles at end

pros being it was a lovely storyline of switched phones.. and a bond of romance starting

Don't see why that extra is simply in for added complex issues to be resolved... after they finally meet each other.

Love story in 5 days via text and emails. Preposterous plot, no chemistry, big quarrel towards end could have been avoided if only the couple communicated like normal adults. Heroine is immature and needs saving all the time, indulges in too much inner monologue, thinks one thing and then does the opposite 3 seconds later. Hero is a big player and he just changes his stripes after 5 days of texts and emails? Yeah right.

Let me start with the pros: the story line was really great and had some laugh out loud moments along with some seriously steamy moments. Two damaged people just trying to get through life and then fate strikes with a phone swap from hell. Trystan and Emmy's chemistry was fun and flirty and just hilarious with so many steamy undertones. This is my first book read by either of the Narrators and they did an amazing job with these two (must find more read by them). The book was easy to listen to with up's and downs and hesitation and joy. Both characters were likable and I rooted for them...until the last few chapters

Cons: OMG Emmy became a Bitch at the end. I understand not wanting to be hurt so there is fear and hesitation, we all go through that. But good lord the way she treated him and acted toward Trystan made me want him to walk away. For the first time ever i was hoping the H would walk out on the h. She was snippy and cruel and just made me cringe. I understand the whole pushing someone away in fear and saying hurtful things but hell she didn't even apologize! At the beginning i thought 'Wow two people who are scared and closed off that are learning to open up" at the end i thought 'God he deserves better then how she is treating him."

Entertaining story with fun characters. The only thing I wished was different was the ending. I felt like it ended abruptly and I would have loved an epilogue. There was still a happily ever after, but I wanted more.

The book got off to a great start. I don’t mind the phone convo, it’s how they got to know each other. Emi quickly became annoying. I felt like she was constantly in her head and whatever conclusion she came to had nothing to do with reality. And even when she was face to face with reality she twisted things in her head to suit her narrative. I was over her by the middle of the book. Narration was great though. I wouldn’t mind listening to them again.

I don't love audio books. I listen to them because I travel often. This is the first audio book that I really loved. The narration was so great, I found myself really thinking about what the characters would look like and that I would love to see this onscreen. A first for me!

Natasha Boyd does not disappoint

I really enjoyed this story. Boyd knows how to write characters that latch onto the reader's heart and don't let go.

There were several things that made this worth the read. First, it's set in Charleston, which is awesome. Second, the story is hilarious. Both characters are cheeky af. Third, the chemistry between these two is hot hot hot. Not only should a reader be prepared to fan herself but also be prepared to fall madly in love with Trystan and Emmy!

This book started on an interesting premise. The phone mix up, but it lost steam fast. The characters spend most of the book onto the phone. The H seemed okay, but the h became annoying after awhile. It took all for me to finish this book. It ended pretty bad. It felt like the writer got lost somewhere.

Opportunity for self reflection

Im genuinely concerned, am i supposed to be applying lotion like constantly??? This woman uses so much lotion everything she owns smells like it, he can smell her lotion from feet away. Hold on let me lotion up, sorry no time for sex im lotioning, thanks for the sex im gona re-lotion. Like honestly should i be lotioning more? This could be a big growth opportunity for me

I loved this story, it was a unique storyline. It was a fun romance that started in a most unique way. I love quirky Emmy is loyal, fun, sweet, but gun shy due to het past. Trystan is a typical bachelor that doesn’t date, only hooks up with different women, but this is due to rejection in his past but that all changes bit by bit as he allows Emmy into his life more and more. I loved the ad he put in the dating app, too cute. I love the dirty talk/text they have back and forth. Even though it was a happy ending it kind of ended quickly and we really don’t know how they do in the future so hopefully in the next book we will get to see how they continue to do. It was great getting to meet his cousin Beau and I can’t wait to read the next story that surrounds his cousin, hopefully we’ll get to read some more about Emmy and Trystan in the book also.

One of my Favorites

This story touched my soul. The two main characters have great chemistry. It also seems so real and honest. I highly recommend it.

loved it, it was perfect and very spicy near the end... i definitely recommend it

Just finished I want to listen to it again already

This audiobook is amazing. I just finished it and want to listen to it again.

This book is not my usual reading/ listening. However, I found myself keen to return to the story. Well written and excellently read, at times it had me in stitches!

I enjoyed listening to this. long journey made much easier. Watch out for the spicy bits, particularly when in public!

I actually enjoyed the story and it reminded me of a romcom. The lead 2 characters are in the same place, same time and their mobile's get switched by accident. Listening to the two narrators were good. What spoilt the romance was vulgar, explicit sex scenes which really were not needed, it made the book cheap and tacky.
Also whenever a narrator is slow, I always up the listening speed.
I am relieved that this book is in the "included" catalogue as I would not be happy using up a credit on this book!

Glad I stuck with it

Well written, up lifting and very saucy. Much better than the Shades of Grey books available.

If you want to be bored ridged then this is the book for you. Two boring characters. For the majority of the book the couple are texting one another. I ridiculously listened to it right to the very end in the hopes that it would get better. It did not. The male narrator would be great at reading horror stories. His voice gave me the chills. Definitely would not recommend..

The only thing back about this experience was the male narrator. A bit of a Weird voice.

It was a breeze to listen to. Will be listening to more from this author.

Super fun to listen to

I love romances that allow for nsfw scenes to shine through but don't turn into a full erotica. It was a fun, mature story and, even if it wasn't perfect, it provided a really good time and a good distraction.

Very easy read. Actually made me laugh out loud a few times.... No easy feat

Absolutely loved the story and the actors who read both parts. I will definitely be downloading more from this author.

Nice easy story with lots of warm fuzzys. Bit disappointed there was no epilogue as is with a lot of these story lines, but still a really good listen with appropriate narrators for the main characters.

I was surprised that this was free with my membership, it was better then some books iv paid for. The romance was refreshing with adult issues and bedroom scenes. I'm excited to read the next book in the series.

what a fun and easy read!

I'm not usually the rom com reader, my books tend to be fantasy, paranormal etc... but I stumbled upon this book and gave it go... it was just so much fun! narration was wonderfully done, story was heartfelt and playful and left me smiling ear to ear! 😁

Really enjoyed this book, loved the characters and story line. looking forward to the next one.

The story was good for a light and easy listen. It went exactly as you would expect. Didn't love the narrators and almost didn't continue after the first few minutes but I'm glad I kept going. It was fun

I wasn't sure how I was going to like Tristan, but fell in love with him in the end. An enjoyable story for sure.