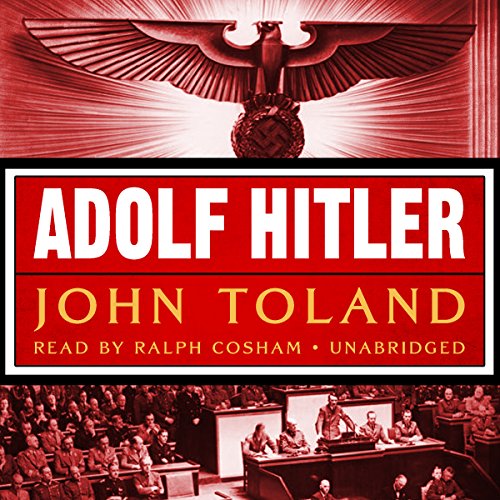 Based on previously unpublished documents, diaries, notes, photographs, and dramatic interviews with Hitler's colleagues and associates, this is the definitive biography of one of the most despised yet fascinating figures of the 20th century. Painstakingly documented, it is a work that will not soon be forgotten.

What listeners say about Adolf Hitler

Very deep and authentic insight into the life of the world's greatest dictator. Great narration despite being a really long book.

Absolutely fascinating, in depth and jarring.

Where does Adolf Hitler rank among all the audiobooks you’ve listened to so far?

This is one of the best audio books I've listened to.

What other book might you compare Adolf Hitler to and why?

This is a brilliant companion piece to "A World Undone" by GJ Meyer [a chronicle of WWI] and "No Simple Victory" by Norman Davies [WWII] in that it gives you an in depth look at how the world got from the First World War to the Second and even supports the premise that both were actually parts of a single World War.

Obviously well researched, one of the most jarring statements made in the book was that if Hitler had died in the mid 30s, he would most likely have been remembered as a truly great leader and savior of the German people.

Toland goes to great pains to avoid passing judgment on Hitler, Nazis, and so on. And to an astonishing degree, he is successful. The book is vivid, thorough, and detailed. And yet, somehow the 40-some hours have flown by.

What can you say about a man who had this much impact on history? How could a person rise from such humble beginnings to mesmerize and captivate a nation, instilling god-like devotion in his followers and inspiring them to wage war on the rest of the world?

This book provides some of the answers, but the true inner Hitler will always remain something of a mystery. He had an unusual early life: He was born in Austria, not Germany. His father was illegitimate and his grandfather may have been Jewish, no one knows for sure. In early adulthood he aspired to be an artist, but he struggled greatly to make a successful career out of this. His failure resulted in him living, for a time, on the streets, in dire poverty. At this stage there were no obvious signs that he was a monster: He loved and cared greatly for his mother and was heartbroken when she died. Strangely, he greatly respected the Jewish doctor who treated her for cancer.

In World War One, he miraculously survived four years of trench warfare as a lowly corporal. Germany’s defeat was very painful for him, but he enjoyed and revelled in warfare more than any other activity. From this time onwards he was motivated by two main passions: the rise of Germany and the destruction of the Jews. In order to bring this about he needed to rise to power, and to acquire this power he used his extraordinary talent for oration. He was a brilliant speaker. Despite his unremarkable appearance and diminutive stature, he captivated his audiences wherever he went.

He used this talent to harness the German people's patriotism, their fear of communism and their anti-Semitism, persuading them to go to war to create a new German Empire. His method of waging war, ‘blitzkrieg’, was innovative and immensely successful. This military success continued for a while, but it nurtured an unrealistic optimism in Hitler. As the tide of war started to turn, when the USSR and USA joined the fight against Germany, he continued attacking, against overwhelming enemy forces, in the mistaken belief that he could repeat his early successes. This approach, which incurred massive loss of life, continued right to Hitler’s end. In his final few days, even as he could hear Russian artillery fire from his bunker in Berlin, he was ordering counterattacks in the deluded belief that the war could still be won. Finally, when he realized that the war was lost, he committed suicide to avoid the humiliation of capture by the Russians.

Why did he hate Jews and treat them so abominably? I didn't find an answer in this book. The Jews have been persecuted throughout history, so antipathy towards them is not particularly rare, but the extent of Hitler's hatred of the Jews and the appalling cruelty he perpetrated upon them was exceptional and truly shocking. Clearly, he used anti-Semitism as a means of motivating others to fight for his cause, but why he wanted to go as far as to commit genocide is unclear. There doesn't seem to have been an incident in his life where he was badly treated by Jews, so it is hard to identify how this came about.

Listening, for 44 hours, to the story of the rise and fall of Adolf Hitler was certainly interesting, although there are certain feelings of guilt and self-accusations of morbid fascination associated with it! I wasn’t able to completely solve the puzzle of what formed this man’s character and how he succeeded so spectacularly, but I did gain some valuable insights into his life and times. If you are interested in history, this book is definitely worth listening to.

About as good as it gets.

As an old history major, I can appreciate how difficult and depressing a subject this is. Toland not only writes very well, interspersing the narrative with interesting quotes and anecdotes, but manages to write very objectively. He succeeds in giving an understanding of what happened and to an extent, why, leaving partisan rancor to others.

Performance was very good, and this documentary of a truly remarkable if not stilted man gives a fair reflection of how a strong enough personality can make and break a nation.

A very well thought out exposition of the private life of one of history's most loathed tyrants, presented in a calm, thoughtful tone that manages to convey Toland's (almost) perfect impartiality while still holding the interest of the reader. A fascinating listen.

One of the most riveting biographies

This superbly written biography uses details the way an artist uses a brush to create a vivid image of Hitler and the reactions of those around him.

A close look at the most influential villain of modern history

This book explores the story of Adolf Hitler from his early years to his end, acknowledging his sins but not making him into a quasi-cartoon villain like some other books about him seem to love to do. Overall, this is a story of a man who let his anger and indignation take him down a dark path full of death and destruction. A difficult listen, but a necessary one if you want to know the man behind the hate.

A detailed and facinating book

Would you consider the audio edition of Adolf Hitler to be better than the print version?

What does Ralph Cosham bring to the story that you wouldn’t experience if you just read the book?

Not the best, a little slow.

A must read for anyone intersted in WW II

The author brings history to life. You not only get a historical perspective of the build up to, and the progress of, WWII, you can also witness the slow deterioration of Hitlers mind.

An interesting and accurate account revealing some detail on lessor known events, interesting insight into Hitler's manner towards secretaries etc.

This book is great but spoiled by sticking to the 'Officially Sanctioned Narrative' regarding the six gorrillion.

What other book might you compare Adolf Hitler to, and why?

What does Ralph Cosham bring to the story that you wouldn’t experience if you had only read the book?

You Really get to know what A Hitler was all about, this was my primary goal in understanding, the boy, the man, the unbelievable leader (getting to power) and the lunatic. I would have like to got to know more on his interaction with Generals, his thought process and strategy on taking on Western and eastern fronts

only as an audiobook I managed..

yes, overall a very good overview over Hitler, quite long but as audiobook manageable. I doubt that I would have had enough stamina to read it myself

What was one of the most memorable moments of Adolf Hitler?

I think audible should revise the questions it gives for the reviews, they are not applicable for non-fiction.I liked the narration very much. Ralph Cosham's voice is well suited for non-fiction, neutral but never boring.

Detailed Account of the Life of You Know Who

I was a little bit disappointed at the beginning when I realised that this was written such a long time ago. However after a while, I found it interesting to see the whole story from the different perspective that being written in the 70s gives it. The author was able to get first hand accounts from many of those who were still alive at the time. It seemed to me early on that he was being much fairer to Hitler than I would have been, but really the facts speak for themselves and in the end there is no redeeming him.
For me the most illuminating sections deal with his early life, but it kept my attention all the way to the end and there is a lot of it, so that has to be a positive recommendation.

This is a lengthy book which I probably wouldn't tackle as a conventional book but found the audio version was easy to listen to in bite size chunks and, for me with an interest in the events of WW11, very informative.
Congratulations to the narrator who stuck at it for 40+ hours with an easy to listen to tone.

Loved every minute of this audiobook. The narration was brilliant. Highly recommended. A A A

An full detailed account of Hitler's Life, dispelling some myths as well as going into detail on some of the lesser known aspects. Very well done.

from a historical standpoint the information in this book is amazing... the detail gathered from people who were around Hitler gives an insight into his life, aims and motivation.. very much enjoyed and strongly recommend provided you have an interest in the topic.

A well informed and interesting insight into history's most infamous leader. The writer delves in every aspect of Hitler's life and is easily accessible. Would also like to say the narrator did a splendid job.

Getting this level of access to this particular book was the reason I joined Audible. I’ve now listened twice. This was necessary take it all in. Massive story.

Before I listened to this book I really didn't like Hitler but by the end of the book I felt like everyone around him didn't realize how much help he needed for his mental health.