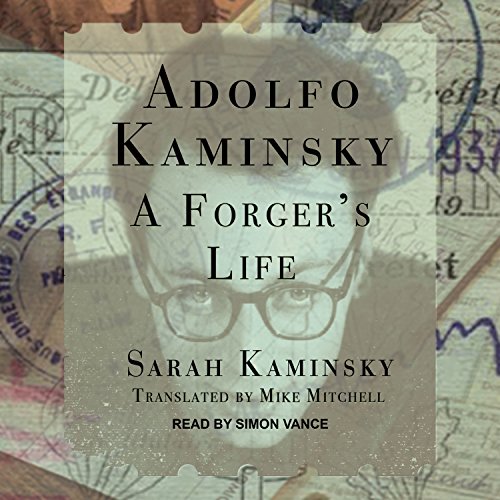 At the age of 17, Adolfo Kaminsky had narrowly escaped deportation to Auschwitz and was living in Nazi-occupied Paris, using forged documents to hide in plain sight. Due to his expert knowledge of dyes and his ability to masterfully reproduce official documents with an artistic eye, he was recruited to join the Jewish underground. He soon became the primary forger for the Resistance in Paris, working tirelessly with his network to create papers that would save an estimated 14,000 men, women, and children from certain death.

Upon the Liberation, and for the next 25 years, Kaminsky worked as a professional photographer. But, recognizing the fight for freedom had not ended with the defeat of the Nazis, and driven by his own harrowing experiences, he continued to secretly forge documents for thousands of refugees, exiles, immigrants, freedom fighters, and pacifists.

Kaminsky kept his past cloaked in secrecy well into his later life, until his daughter and biographer Sarah Kaminsky convinced him to share the details of the life-threatening work he did on behalf of people fighting for justice and peace throughout the world.

"The skill of Simon Vance, narrator of this audiobook, is his ability to take a memoir that opens during the French Resistance in WWII and fully capture its suspense-filled drama.... Simon Vance breathes a terrifying reality into what it means to defy tyranny." ( AudioFile)

It was true and raw and emotional.

It made me feel connected to the main character and want to search for more....

The voice was the best of any audible I have ever listened to.

Unexpectedly Fascinating extraordinary
Ty excellent narration. I had selected it because of the narrator Simon Vance.
A different take not only on the French Resistsce but also on other revolutionary movements around the world

I found this book fascinating. But I wonder why the prologue and epilogue were in the same (male) voice as the main story, when these were the words/thoughts if the daughter.

Adolfo Kaminsky is a truly amazing person. Very few of us would have the dedication to causes that we believe in, as he did, with such idealism. I share most if not all of his values, and yet I can’t imagine myself making the sacrifices that he did for as long as he did. Sadly, I would become cynical in the course of time. Though his work in the resistance in WWII ended with a better Europe, some of the other causes, though just, down the road resulted in corrupt or authoritarian regimes. For example, it is certainly positive that apartheid ended, but the current government in South Africa is very corrupt, which is such a shame. He recognized the fighting between factions as a problem in some of the causes he supported. Thus, by listening to his story, we also are reminded of how complex the world is, how complex people are, and how much of a challenge we all have to make the world a just place, where no one needs a forged passport to have freedom from persecution and to live a decent life. An inspiring story that is also a summary of some 20th century history. Simon Vance is a superb narrator, as always.

Fascinating. Totally absorbing. Worth your time

Follow the escape from Nazi oppression and a turn to save many from the camps. Kaminsky was obsessively committed to provide documentation to many causes, and worked tirelessly to support many freedom fighting groups.

Interesting but a bit 'flat'

I was somewhat disappointed in this book as I had high hopes for an exciting and uplifting read. It started out well but steadily became quite dull and was more like a 'dry' documentary. Perhaps something got lost in the translation.