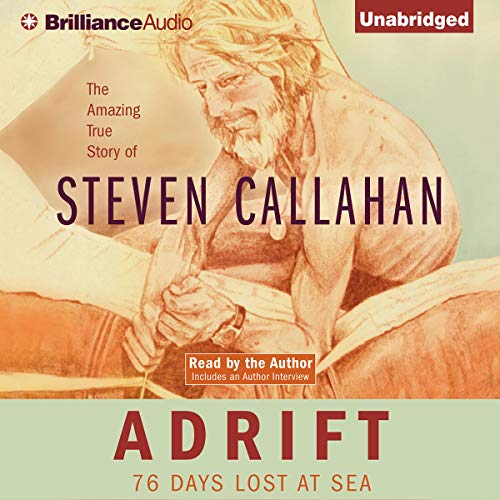 Before The Perfect Storm, before In the Heart of the Sea, Steven Callahan's Adrift chronicled one of the most astounding voyages of the century and one of the great sea adventures of all time. In some ways the model for the new wave of adventure books, Adrift is now an undeniable seafaring classic, a riveting firsthand account by the only man known to have survived for more than a month alone at sea, fighting for his life in an inflatable raft after his small sloop capsized only six days from port.

Racked by hunger, buffeted by storms, scorched by the tropical sun, Callahan drifted for 1,800 miles, fighting off sharks with a makeshift spear and watching as nine ships passed him by. "A real human drama that delves deeply into man's survival instincts (Library Journal), Adrift is a story of anguish and horror, of undying heroism, hope, and survival, and a must-read for any adventure lover.

"Fascinating...a clearly written ocean yarn in which the stakes are high and a brave man wins through." (Wall Street Journal)

I listened all the way through

One of the rare audiobooks that I couldn't stop listening to. The details and story is what was missing from the other sailing books I've heard. The addition of the interview with the author was a great surprise.

The story keeps you listening from start to finish. I would recommend as an excellent book.

If you could sum up Adrift in three words, what would they be?

What was one of the most memorable moments of Adrift?

The guys ability to keep living.

Gods hand was on him all the way!

Adrift is an absolutely incredible story of survival, perseverance, and the strength of one man's spirit. It is a rare, beautifully written, survival account, and I would highly recommend it.

Unfortunately, the narration is rushed and detracts from the beautiful writing. While it is nice to hear the story read by the author, this one deserves a second recording by a more skilled oral storyteller. It just felt rushed, and rushing through such an incredible story simply does it a disservice.

Where does Adrift rank among all the audiobooks you’ve listened to so far?

What other book might you compare Adrift to and why?

The worst journey in the world

A must for lovers of the outdoors!

...to the limit cannot really be done in a training scenario no matter how serious the situation. It is only when death threatens around every corner that human ingenuity and the will to survive can be truly revealed. Callahan depicts these qualities in graphic brilliance and forces the listener to experience at least a little of what he went through.

Would you consider the audio edition of Adrift to be better than the print version?

What other book might you compare Adrift to and why?

There were so many!!

I am struggling to finish

I like to listen to audio books as I do chores around the house, and this book seems to be too mundane even for that. I made it to the chapter where he's rambling on about wanting to bang a fish, but her parents wouldn't approve. I bet the author really loved the movie the shape of water

I love hearing stories of survival. Maybe because I love to go on solo hunting and outdoor trips. Amazing story full of survival skills, brutal suffering, never give up,and personal growth through the will to live. Absolutely definition of inspiration.

One of my favorite books

I love this book. I have both read and listened to it several times. It’s a terrible ordeal he goes through, but he keeps a nuanced view of what’s happening all the time. It’s amazing. 10/10 recommendation.

What made the experience of listening to Adrift the most enjoyable?

The auther described his surroundings so well you had a mental picture of it.

There was only one character which was the sailer.

He read the book calmly but also expressed the excitement of catching a fish, or the overwhelming feeling of helplessness in the current surroundings.

An unbelievable story of survival and endurance

I feel privileged for having heard this remarkable story.
Stevens ability to adapt to his new environment and his relentless struggle to push on left me mesmerized and blessed for the simple things we take for granted. Thank you