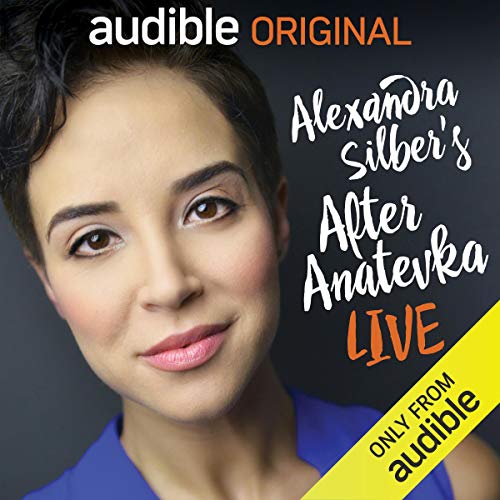 A special live performance to satisfy Fiddler on the Roof fans who have long wondered what became of Tevye’s beloved family. Experience an enthralling performance featuring a cast of rising Broadway stars who join actress and author Alexandra Silber in celebrating the Audible release of After Anatevka, the sweeping historical novel she wrote about Tevye’s second-eldest daughter, Hodel. Silber’s fascination with Hodel began when she played her in a production of Fiddler in London’s West End. Actors often write a backstory for the characters they play so they can fully imagine and embody them onstage. But Silber was more interested in Hodel’s fate than her history. “I had never played a character who felt so much like me,” she says. “I felt responsible for what happened to her after she boards the train to Siberia to join her revolutionary fiancé Perchik.”

Originally commissioned by Symphony Space, a form of this concert was produced in March 2017. After Anatevka Live brings to life dramatic excerpts from Silber’s novel with five original songs by contemporary composer and lyricist teams, plus two much-loved songs from Fiddler and one gem that was cut from the final song book. Directed by Carolyn Cantor with musical direction by Ben Moss and an introduction from Pulitzer and Tony Award-winning Fiddler lyricist Sheldon Harnick, this is a charming and magical event for any lover of musical theater.

This was a heady writing that didn't engage the reader. I wasn't a fan of the new music either.
I was hoping to hear a story but was completely disappointed.

Big fan of Fiddler on the Roof but this was a major letdown. If you are looking for a story, there is very little. Most of the presentation is talking to the audience and not establishing an engaging progression of Fiddler. The minimal story is consistently interrupted with audience interaction.

Very touching music and story following a story that has touched the hearts of so many.

Fiddler fans will love this

I thoroughly enjoyed it, from the old songs to the new and wanted more. Spectacular!

The author/narrator is very annoying and her voice is too loud and abrasive. On top of that, the continuation of the Fiddler story is sophomoric. Fiddler is one of my favorite musical plays. Please leave it alone!

I loved Fiddler on the Roof but found this production, particularly Alexandra Silber's excessive gushing, to be very disappointing. The story line was forced and the musical numbers were disappointing. There was too much self-consciousness about everything. Just tell a story without having to explain each character.

sequels are usually not very good. but this one is very bad. Pretentious and unimaginative.

I thought this was a full live recording of the After Anatevka book, but it's just a few excerpts with a few songs sprinkled in. Overall, it was disappointing as it wasn't what I expected. This is explained in the synopsis, but it's buried fairly far down in the midst of a lot of other things so I missed it.

did you like fiddler on the roof and ever want to know what could have happened to some characters after the oroginal stage production?...well look no further. welcoming surprise. great musical talent.

this story touched my heart!

I too acted in the show Fiddler on the Roof. Thank you so much for writing such a wonderful addition! The music was lovely too!